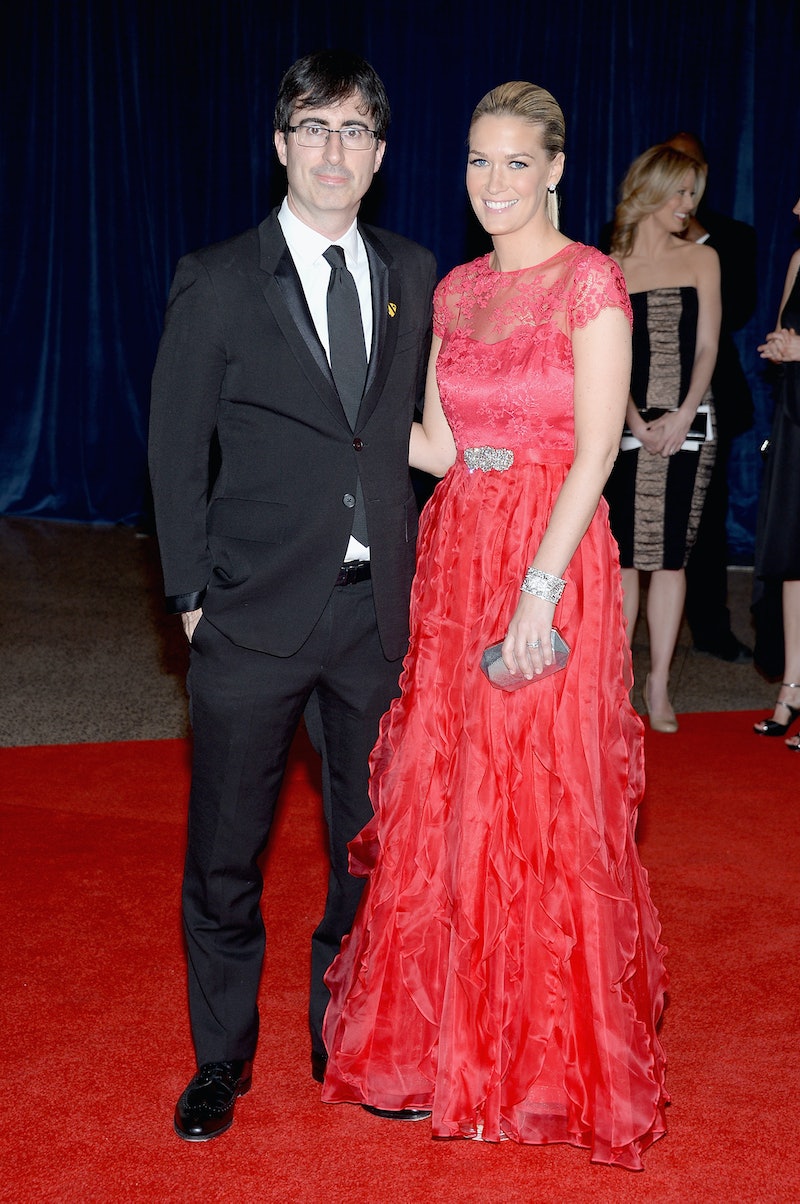 In 2013, Oliver attended the correspondents' dinner's garden party as a writer for Jon Stewart's The Daily Show. It would be exactly one year (to the day) until Oliver's own show, of a similar format, premiered on HBO. Oliver showed up with his wife, Kate Norley, an Iraq War veteran of the U.S. Army. Norley wore a beautiful red dress, while Oliver wore a pretty standard tux.

You can see a photo of the couple below, but let's be honest, you probably care more about what witty things Oliver said at the White House than what he wore. As always, Oliver turned his commentary into a joke — but that's to be expected with the White House Correspondents' Dinner.

Oliver wasn't there to address the crowd. In 2013, that was Conan O'Brien's position. Yet, while Oliver was attending the garden party, he reportedly turned to the cameras and said, "Oh, is this C-SPAN?"

Indeed, it was C-SPAN he was waving too, which is pretty funny if you think about it. When was the last time you watched C-SPAN? The event's government crowd is probably used to the C-SPAN cameras, but for the Hollywood and media crowd, it's a little different. The correspondents' dinner is perhaps the one time a year when an A-list lineup of celebrities looks forward to appearing on the little-watched public service channel.

You see something like the warmth of response ... at the White House Correspondents' Dinner [where] everyone is so comfortable being in the same room as people that they are supposed to be the check and balance on.

Just days later, Oliver covered the correspondents' dinner on one of the first episodes of Last Week Tonight. According to Oliver, the dinner is "where you can see such majestic sights as National Security Adviser Susan Rice asking for an autograph from the guy from Duck Dynasty." The dinner, as Oliver notes, puts government officials and members of the media in an usual setting together, making it an unusual American tradition.

Oliver will get another chance to analyze the correspondents' dinner in his next episode of Last Week Tonight, as the 2016 event is set to take place on Saturday. This year's dinner will be hosted by comedian Larry Wilmore and attended by the likes of Will Smith and Morgan Freeman. It is President Obama's final correspondents' dinner, and the conversation will likely focus on this year's presidential election, including the controversial Republican front-runner, Donald Trump.