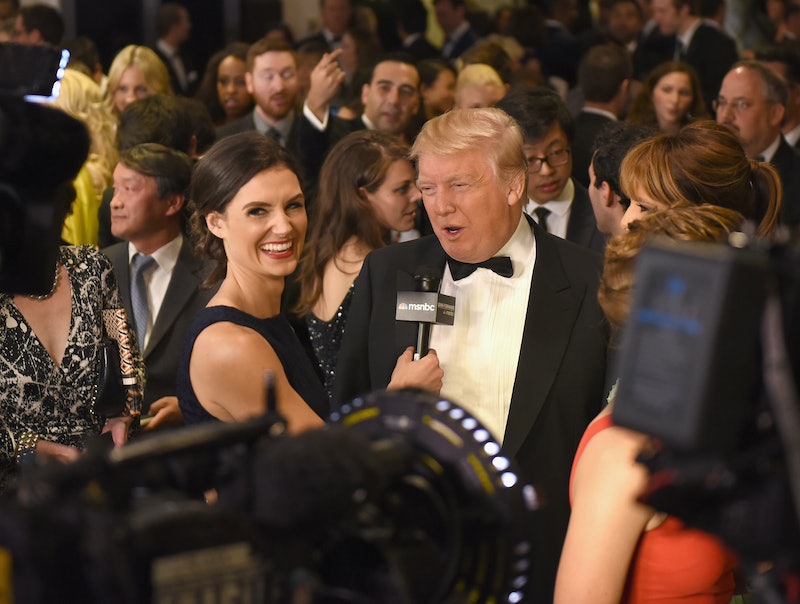 When tuning into the celeb-laden event of the year, you'll notice a certain someone isn't there. Contrary to past years, Donald Trump will not attend the White House Correspondents' Dinner Saturday. No, Obama's 2011 birther jokes, delivered with an impressive poker face, aren't to blame. Neither is the fact that politicians from Trump's worst collective enemy — the establishment GOP — will be in attendance. According to The Donald himself, only the press is to blame. The real-estate mogul is sick of picking up a paper the morning after the event and reading about how much he allegedly hated it. Says Trump:

I was asked by every single group of media available to mankind [to attend this year]. But I've decided not to go. Do you know why? I would have a good time and the press would say I look like I wasn't having a good time.

In fact, Trump doesn't even claim to have been bothered by the president's harsh jokes about him during the 2011 WHCD. Before Obama was re-elected to office, the businessman had insisted that he show his birth certificate to prove he was born in the United States, because apparently one can never be too sure. Finally, he got his wish. Obama, after showing he was born in Hawaii, most certainly wasn't ready to let Trump live it down; he used the incident for inspiration.

No one is prouder to put the birth certificate matter to rest than the Donald. And that's because he can then get back to focusing on issues that matter, like did we fake the moon landing? What really happened in Roswell and where are Biggie and Tupac?

To be fair, Trump certainly didn't look miserable. Though he seemed initially distressed, he eventually gave in and laughed at himself. Later, he even told the press he was "very honored" by the attention. And he probably wasn't lying considering he voluntarily allowed Seth MacFarlane to roast him that same year. Retrospectively, that comment makes all too much sense since he's become an expert at profiting off of both positive and negative publicity.

I was very honored by all of the attention. The president told joke after joke and it was good. They were all very nice and delivered nicely and I had a great time and told the press. For four years, I've read what a miserable time I had.

However, there may be more behind Trump's absence since he's gone from celebrity to major political player. For one, it's safe to say the White House doesn't particularly want him there. During a news conference in Rancho Mirage, California in February, Obama commented on a potential Trump presidency:

I continue to believe Mr. Trump will not be president. And the reason is because I have a lot of faith in the American people.

In other words, Obama said that America is better than Trump. Good sport or not, I wouldn't want to attend that dinner if I were The Donald. Now, only one question remains: Will Trump jokes be more abrasive in his absence? Most likely. The Hollywood Reporter's Chris Gardner asked Larry Wilmore how many Trump jokes are too many. Wilmore answered 900 or 1,000, saying:

It's a conundrum writing a Trump joke because he's such a caricature himself. Repeating what he says is probably funnier than anything you could write ... I love it when he gets mad about people making fun of him.

But as Wilmore pointed out, the GOP front-runner's a billionaire and clearly not afraid to parade that fact. So why should he care?