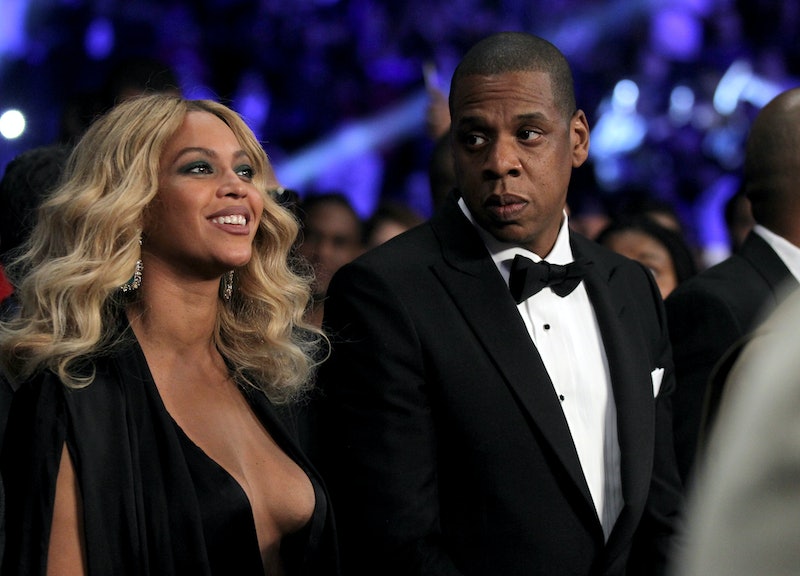 Following the HBO special and the official release of Beyoncé's latest album, Lemonade, fans of the Beyoncé and Jay-Z power couple were sent into a frenzy. Between lyrical mentions throughout the visual album seeming to hint at Jay-Z cheating on her, and fans believing the possibility of fashion designer Rachel Roy being the "Becky with the good hair," it hasn't exactly been a quiet week in the Beyhive. Bustle has reached out to Beyoncé and Jay Z regarding the divorce and cheating allegations, but has yet to hear back. However, the story of love and loss that Lemonade tells could be purely a moment of the past, or a complete invention of fiction. Beyoncé dedicated a song to Jay-Z during her Formation World Tour kick-off in Miami Wednesday night, and that doesn't exactly spell an end to their marriage the way fans have been fearing.

While the Lemonade singer was sure to perform songs off the recently released hit album, she also threw it back to some of her older hits, including songs like, "Crazy In Love," "Single Ladies," and "Halo." While closing out the show with the song "Halo," it was the words of her song dedication that seemed to speak louder than all of the words of betrayal from the past few days. “I want to dedicate this song to my family, thank you guys for supporting me. I want to dedicate this song to my beautiful husband, I love you so much. Blue, I love you so much,” said Beyoncé over fan cheers. And that, my friends, is how you put the rumors to rest.

But that's not even where the reassurance ends. According to the Beyhive's fan Twitter account, Beyoncé Legion, Queen Bey herself also happened to declare "All Night" as her favorite song off Lemonade while performing. For those of you that tuned in to the HBO special or even listened to the whole album straight through, it's clear that this song is one of reconciliation. "All Night" clearly exemplifies what it means to remember the good times in a relationship and rekindle that love in spite of hard times. In fact, some of the most directly telling lyrics in that song include, "Trade your broken wings for mine. I've seen your scars and kissed your crime," and "Every diamond has imperfections. But my love's too pure to watch it chip away." The constant stream of confidence Beyoncé exuded during her performances of both "Halo" and "All Night" certainly help prove the point as well.

So, cheating rumors or not, Beyoncé and Jay-Z are probably stronger than ever before. And, if anything, Beyoncé is doing her best to prove that true love reigns in the end. Now it's time to listen to "Halo" and "All Night" on a neverending loop.