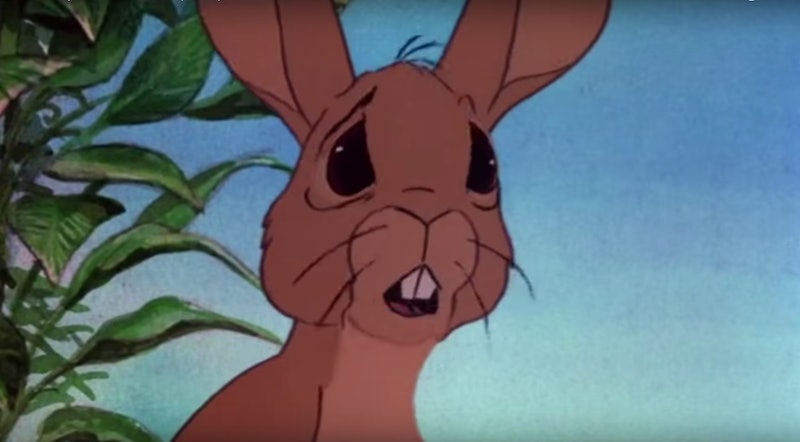 The film adaptation that traumatized the last few generations is back to frighten youngsters all over again: the BBC and Netflix are producing a new Watership Down TV series based on the terrifying novel by Richard Adams. Because what all children need is to be scared out of their minds by violent rabbits. Obviously.

The novel has been adapted twice before, once into a 1999 TV series, but most infamously into the 1978 Watership Down movie that has prompted British parents to complain about its "U" (suitable for all ages) certificate every year since then. Thankfully, producer Rory Aitken told The Verge that the BBC and Netflix version of Watership Down won't be as scarring as the film — though it's not going to "shy away" from the novel's darkness either. Eek.

Hopefully the star-studded cast in the four-part Watership Down series will go some way to soften the blow of watching adorable rabbits kill each other on screen. John Boyega, James McAvoy, Nicholas Hoult, Olivia Colman, Gemma Arterton and Sir Ben Kingsley are just a few of the big names who have signed up for the project — which might actually be enough to tempt me to watch it, even though I've only just got over the trauma of watching the last film.

Here's some great news, though: not only will this version tone down the violence that scared us all so much last time round, the executive producer also told The Telegraph that it's going to "give a boost to its female characters." Woop! A child-friendly Watership Down, and a feminist-friendly one to boot.

More like this
16 Novels That Paint A Realistic Portrait Of Abortion
By K.W. Colyard
Here’s Everything Coming To & Leaving Netflix In July
By Grace Wehniainen
Sparks Fly Fast & Furious In 'Honey & Spice'
By Bolu Babalola
Aesop's Queer Library Is Open
By Tomi Otekunrin
Get Even More From Bustle — Sign Up For The Newsletter