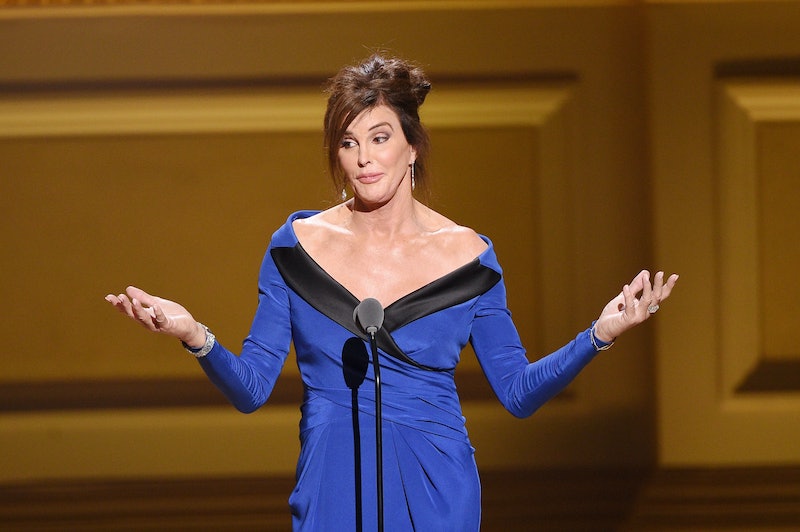 If there's one thing legislators probably didn't expect out of North Carolina's "bathroom bill," it was launching LGBT rights into the spotlight of the elections. One of the hottest election topics now centers on the right to pee, and everyone has been weighing in. On Wednesday, trans rights activist Caitlyn Jenner used one of Donald Trump's bathrooms and filmed her trip, praising Trump's recent invitation for Jenner to use any bathroom she wishes in his buildings. She also took shots at Ted Cruz — who, along with trying to ban dildos, supports the "bathroom bill" and seems creepily obsessed with what people do with their private parts in general.

In her video, Jenner is walking in Manhattan and says, "Oh my God, a trans woman in New York. I gotta take a pee." She spots Trump International Hotel. "Oh my God, Trump International Hotel, I love this. Last week, Donald Trump said I could take a pee anywhere in a Trump facility, so I am gonna go take a pee in the ladies' room." Afterwards, she says, "Thank you, Donald. I really appreciate it. And by the way, Ted: Nobody got molested."

It's powerful to see a trans woman defying bigotry and gliding into the ladies' room with Jenner's grace, but unfortunately, her video reinforced something terrible about how trans rights have been dealt with in these elections. Notice how Jenner didn't actually address any issues of trans rights. She only talked about the bathroom bill in the context of Trump and Cruz, and by doing so, made the video all about them — not trans rights.

That, in and of itself, is not problematic. Jenner is allowed to talk about anything she wants. However, her video reflects how trans rights have been appropriated by Trump and Cruz for their own benefit.

Since North Carolina's "bathroom bill" became an hot topic, it's raised a lot of awareness about trans issues. However, on the other hand, the movement has also been diminished, to a degree, into a way for Trump and Cruz to jab at each other. Considering Trump's transphobic record, he spoke out about the bathroom bill with a surprisingly mellow attitude, saying it was "very strong" and had "a lot of problems." Cruz attacked Trump with an anti-trans ad full of fire and brimstone, calling his words the sort of "PC nonsense that's destroying America." Later at a rally, Cruz mocked Trump and Hillary Clinton — how efficient! — saying, "If Donald Trump dresses up as Hillary Clinton, he still can’t go to the girls' bathroom."

Not only has this issue been hijacked by Trump and Cruz, but the way it now manifests in the elections (and by proxy in the whole country) is alarming. North Carolina's "bathroom bill" is the symbol of trans issues in current discourse, which is dangerous, because it reduces the plight of trans individuals into this single issue.

Jenner's video talks more about the Trump versus Cruz battle than any actual issues. It leans more toward toasting Trump than using the spotlight of the election to productively raise awareness of trans issues. At the TIME 100 gala, Jenner, a longtime Republican, acted similarly and praised Trump for his stance on the North Carolina law: "This toast actually started in a bathroom. Actually, bathroom issues right now in my life seem to be in the forefront." They absolutely are, Caitlyn, but that means we need to think even more critically about how to react to their popularity.