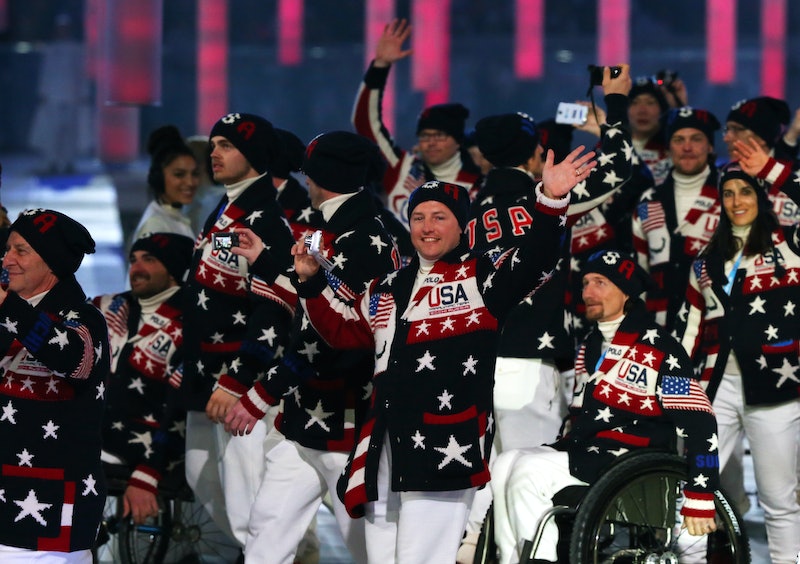 With barely three months until the Olympic games begin in Brazil, every country's official uniforms are starting to be unveiled. The Team USA uniform was designed by Ralph Lauren (again). But this isn't his first polo rodeo. The designer has so many Olympic uniform creations under his belt, it's almost unbelievable.

UPDATE: We have updated this story to include Team USA's Opening Ceremony uniforms from the 2018 Winter Olympics in PyeongChang.

As the International Business Times reported, Ralph Lauren was dubbed "the official designer of the uniforms for the U.S. Olympic team from 2008 to 2020," meaning 2016 is the brand's fifth time to design the U.S. athletes' looks! That is a freaking ton of uniforms, no?

As for this year's style, Ralph Lauren took a serious departure from the grandpa cardigan vibe sweater look from the 2014 Sochi Olympics and went clean and preppy. Even though they give off a slightly different feel overall, there's still certainly no mistaking who the mastermind was behind the designs for 2016. The new uniforms are classic Lauren, with button down Polo shirts, striped Ts, braided belts in patriotic hues, and crisp white shorts. It's basically maximum summer.

As for the previous Ralph Lauren olympic designs, scroll on!

A mix between newsboys, sailors, and Harry Potter.

Those newsboy hats were not messing around in 2008! Can't wait to see the continuing trend of rocking that red, white, and blue.

How cute is this patriotic winter look? From the preppy knit sweater to those cowboy-esque fringe gloves, it's quintessentially Ralph Lauren.