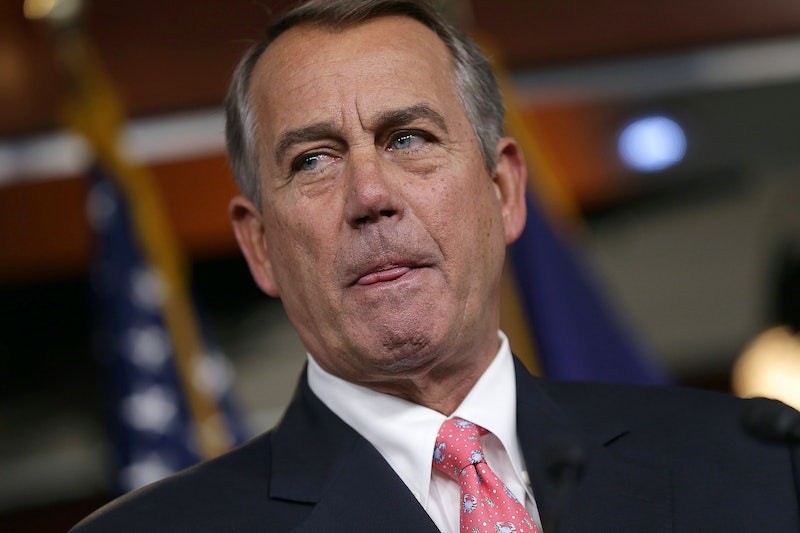 Former Speaker of the House John Boehner seems to be enjoying his retirement and, along with it, the ability to freely take potshots at anyone without the pressures and trappings of, well, speaking for the House. During an appearance at Stanford University on Wednesday, Boehner spoke about every presidential candidate with the candor and snark that only a burned-out, embittered former elected official can. According to The Stanford Daily, he called Ted Cruz "Lucifer in the flesh." Which is just unfair to Lucifer — what did he ever do to Boehner? He also called Donald Trump his "texting buddy," said John Kasich is "my friend, and I love him," and called Bernie Sanders the "most honest politician in the race."

So what words did Boehner have for Hillary Clinton? Allegedly, Boehner impersonated Clinton, saying “Oh, I’m a woman, vote for me.” Thankfully, according to The Stanford Daily, the crowd reacted negatively. Is Boehner for real? Seriously, just when I think Trump had done more damage to the Republicans' reputation with women than any modern politician could, the Donald gets a run for his money.

A lot of focus has been on Boehner's (admittedly hilarious) comparison of Cruz to the Devil, but let's not overlook his comments on Clinton, which were not even subtle in their sexism. The Stanford Daily reports that he did add later that he had known Clinton for 25 years and found her to be "very accomplished and smart," but the damage was done. Bustle reached out to Boehner for comment, but did not hear back by the time of publication.

It's yet another example of the onslaught of sexism Clinton has faced during this election. Clinton has been accused of "playing the gender card" time and time again. As recently as Tuesday, Trump said during a rally, "Frankly, if Hillary Clinton were a man, I don't think she'd get 5 percent of the vote. The only thing she's got going is the woman's card." Just like Trump, Boehner, with his kitschy impersonation, accused Clinton of being a card-carrying woman.

The fact that Boehner somehow thought that boiling down the former secretary of state and New York senator's presidential credentials into her being a woman would be remotely funny speaks volumes about his own out-of-whack sense of what's sexist and what's not. The thing is, in the context of a presidential race, it makes sense — even if it's not right — for candidates to aim blows at each others' character. Presidential races get bloody, and in the mad scramble to win, everyone's ugly side shows. Boehner, who's not even running, somehow decided to jump into the sexist fray and show off his misogyny toward Clinton. It only made himself look like a fool.

Moreover, it says something that this remark has gotten so relatively little coverage compared to his remarks about Cruz — and come on, who didn't already know Cruz was the devil incarnate and horrible as a co-worker? Specifically, it reveals how much sexism we tolerate, and how much we assume is par for the course. That may actually be more upsetting than Boehner's one-off.