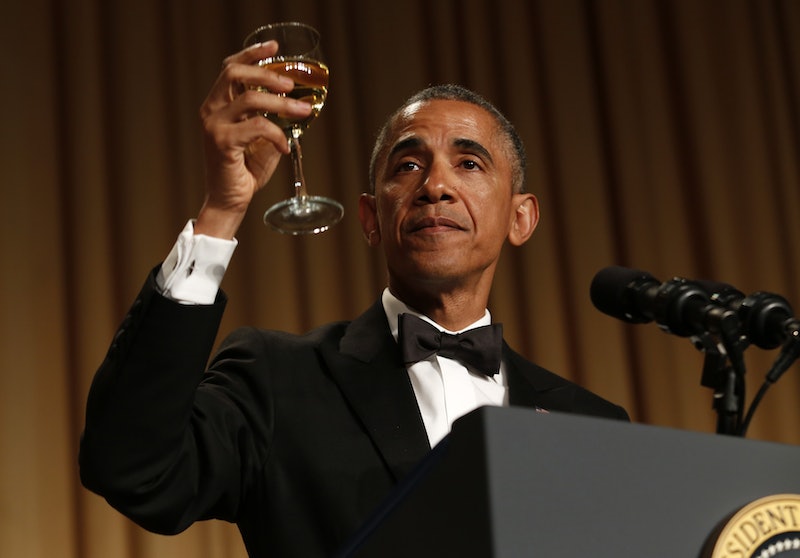 C-SPAN's coverage, including pre-dinner red carpet stuff, begins at 6 p.m. ET. Larry Wilmore of Comedy Central’s Nightly Show will host the event this year. While people are pumped to see Wilmore take the reins, the person all eyes will be on is, of course, Barack Obama, who will be attending his last White House Correspondents' Dinner as president.

If you haven’t watched him at any of these dinners in past years, you should, because he’s really good at them. He’s a funny guy when he wants to be. Last year’s best jokes referenced Joe Biden, the ABC series Blackish, and an end-of-term attitude that is not “bucket list,” but does rhyme with “bucket list.” This is one of those events where Obama’s charming, affable side gets a little more free rein, and I’ll be sad when he’s not the one speaking at these things anymore.

This year’s White House Correspondents’ Dinner will be entertaining, I’m sure, but as I’ve heard no plans for it to include Key & Peele character Luther, I can’t say I’m nearly as excited as I was last year, though there’s a chance I’ll never be that excited about anything ever again.

To get you warmed up for April 30, here are a few of Obama’s greatest hits from previous years, directed at a spray of basically every person in politics:

In 2015, on Hillary Clinton's presidential run:

I have one friend, just a few weeks ago she was making millions of dollars a year and she’s now living out of a van in Iowa.

In 2015, on Biden and Indiana's anti-LGBT Religious Freedom Restoration Act:

We’ve gotten so close that in some places in Indiana, they won’t serve us pizza anymore.

In 2014, on John Boehner's inter-party fighting:

These days, House Republicans are actually giving John Boehner a harder time than they’re giving me, which means orange really is the new black.

In 2014, on Chris Christie's Bridgegate scandal:

Gridlock [in D.C.] has gotten so bad, you’ve got to wonder, what did we do to piss off [Gov.] Chris Christie so bad?

Yes, we have that to look forward to one more time.

More like this
Juneteenth Is Now A Federal Holiday — Here's What That Means
By Lani Seelinger and Syeda Khaula Saad
Dan Levy’s Father’s Day Pic Of Dad Eugene Spoofs The ‘Schitt’s Creek’ Vet’s Past
By Grace Wehniainen
'The Undeclared War' Took Inspiration From This Gavin & Stacey Location
By Maxine Harrison
How To Fight For Reproductive Rights, Based On How Much Time You Have
By Courtney Young
Get Even More From Bustle — Sign Up For The Newsletter