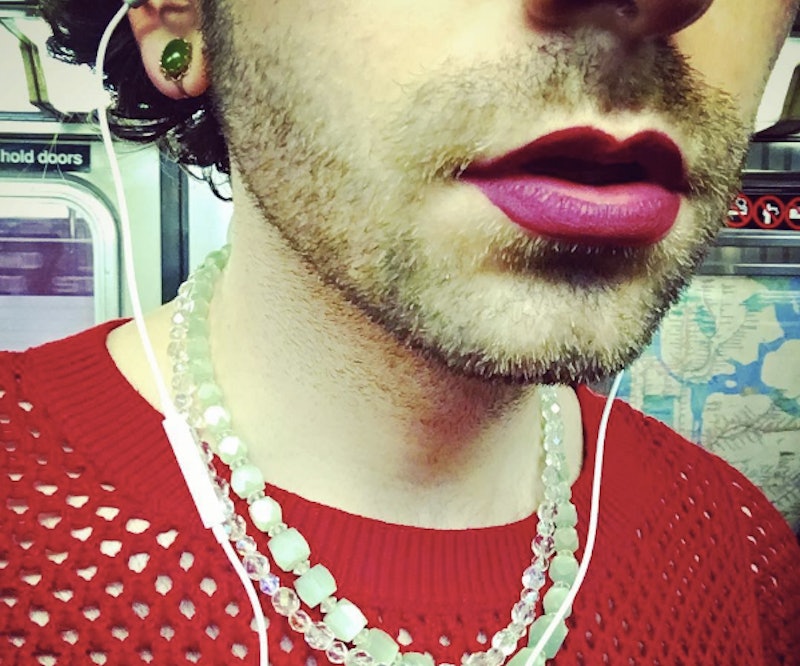 Since Caitlyn Jenner came out as a transgender woman via her Vanity Fair cover in summer 2015, it seems that queer and gender nonconforming visibility has really been having A Moment. The moment, however, hasn't felt entirely authentic to me. We've seen more and more brands attempt to utilize the term "gender neutral" to market androgynous fashion that isn't seemingly made for the trans and gender nonconforming bodies that need them most. As with body positivity, "androgynous" has quickly become a buzzword without enough understanding of its meaning for many LGBTQIA+ individuals behind it.

Most of the androgynous collections we've seen so far — like Zara's Ungendered collection and unisex clothing options at big retailers like American Apparel and Urban Outfitters — have been made up of loose-fitting masculine clothing or athletic-wear, often shown on feminine models. However, in order to truly elevate the term, we have to expand our definition of androgyny to cater to all facets of the gender spectrum, and create clothing that is truly gender neutral.

As a gender nonconforming person, I can confirm that nothing about the majority of "gender neutral" lines caters to that aspect or my style or identity. If I wanted to buy neutral-toned sweats that are slightly oversized, I could simply browse the men's department of my local mall instead.

However, gender nonconforming and trans people also need masculine clothing that fits our feminine bodies, and feminine clothing made for our masculine bodies. A thin, white, cis-passing woman rocking her boyfriend's jeans is not an androgyny that speaks to all the individuals who actually live a gender neutral life. I consistently find myself asking whether trans people are even kept in mind when creating these lines, or whether androgyny and the identities that go with it are simply a trend now.

My friend and gender activist Jacob Tobia analyzed Zara's genderless clothing line in particular in a Facebook post back in March, when the collection was first unveiled. "I mean I'm happy that you launched a genderless clothing line ZARA, but [...] why does 'gender neutral' fashion have to be so colorless and gray and structureless and drab? Why does 'androgyny' mandate no color or form or sequins???? This clothing line is conceptually interesting I guess, but as a nonbinary person I'm bored and saddened by it." Zara has yet to responded to Bustle's request for comment on the subject.

The issue with so many companies and humans alike is the automatic association of androgyny with masculinity on feminine people. Google defines "androgynous" as "partly male and partly female in appearance; of indeterminate sex." With little to no knowledge about trans and gender nonconforming identities seemingly inspiring the fashion industry, what we are seeing is arguably the reinforcement of patriarchal ideas and a replacement of old binaries (men in pants and women in skirts) with new binaries (androgyny equals "boyfriend jeans"). But what about transfeminine people? Where are the dresses and the bright colors for them?

Personally, lines like Zara's serve me well because of my inclination towards masculinity, and my preference for looser-fitting clothing when presenting masculinely. But mine is only one experience out of a vast myriad of gender nonconforming and trans people. Many folks are looking for traditionally feminine clothes: For bright and dazzling pieces to pair with their heels and beards. And those same people cannot often find dresses that fit their bodies the way I can find men's clothes that fits my own. Not to mention that I often feel like presenting femininely as well, and would love these lines to reflect the full spectrum of gender identity.

IMO, we should work towards abolishing specific men's and women's sections and removing gender from clothing altogether. As my friend Emmett Flanagan tells me via Facebook, "The idea of gender neutrality is that there Are No Gendered Characteristics. Clothes have no gender, sports have no gender, colors and flowers and ways of laughing have no gender. Introducing this concept of 'nonbinary' to Western culture as a third gender is f*cking up the whole process. It's only creating another cage TBH. No gender neutral clothing lines please, just gender neutral ways of thought."

I'm all for the concept of truly degendering clothing. But realistically, we live in a gendered world where passing as cisgender is what is most likely to prevent you from being attacked on the street. The survival and comfort of trans and gender nonconforming people should be highly considered here when conceptualizing a gender neutral line.

Speaking as a transmasculine person, another friend of mine, Konrad Wainright, tells me via Facebook, "Clothing cut and tailored to fit all body types can be a method of survival for many people and if gender-neutral brands can thrive, it will encourage retailers to create clothing in all styles cut for all bodies," he wrote. "It is intensely hard for me, a thin, cis-passing person, the type of person clothing lines literally cater to, to find any kind of formal menswear because my proportions are different than a cis man's. If any of us want things to fit, we often need to be able to pay tailors to modify our clothes — and since trans people are as a demographic substantially less wealthy than the average cis person, that's an expense we frequently just can't afford."

He also discussed how creating gender neutral lines and clothing stores might make shopping safer for gender nonconforming and trans folks. "I know a lot of trans women who have been terrified to go shopping in women's stores and sections," he tells me. "But with neutral clothing lines where there are no gendered restrictions, it creates a much safer environment. When you have to gauge your shopping trips by the level of violence you might encounter, that makes a world of difference."

Bottom line: Gender neutral clothing lines and stores are crucial for the queer community for a number of reasons. But they need to be done right in order to affect any real change in how we perceive gender and how we treat trans people both in fashion and in public. We need to make feminine clothing that fits masculine bodies and masculine clothing that fits feminine bodies. We need to abolish the stigma of femininity and transness. We need to help gender nonconforming people feel safe in clothing stores and in their own skin.

The designer who perhaps sets the greatest example for what needs to be done regarding trans-inclusive fashion is SmartGlamour owner and designer Mallorie Dunn. Her size-inclusive clothing caters to people of all sizes and gender identities, while offering custom sizing so that any item will fit the client's body like a glove. She also employs models of all gender identities. While her clothing is super femme and may not match everyone's aesthetic, she makes sure to cater to all bodies, including masculine ones.

"My clothing is 'unisex' because anyone can wear it if they choose," she tells me on Facebook. "I will customize to any measurements — including those that might seem as if they came from 'masculine' proportions."

Gender neutral lines are not only a very smart idea, but a demand in the gender nonconforming and trans communities. But expanding one's definition of androgyny while demonstrating a willingness to bend and break binaristic perceptions is crucial when trying to successfully pull something like this off.

Your idea of androgyny may be a cis woman with short hair and loose-fitting joggers. If that's how you're comfortable identifying, all the power to you! But when concerning gender neutral lines, we cannot ignore the fact that the prime audience should be nonbinary and trans individuals. Make all types of clothing that fits all types of bodies, and the trans and GNC communities will likely be ready to dole over their hard-earned cash without sacrificing their identities in the process.