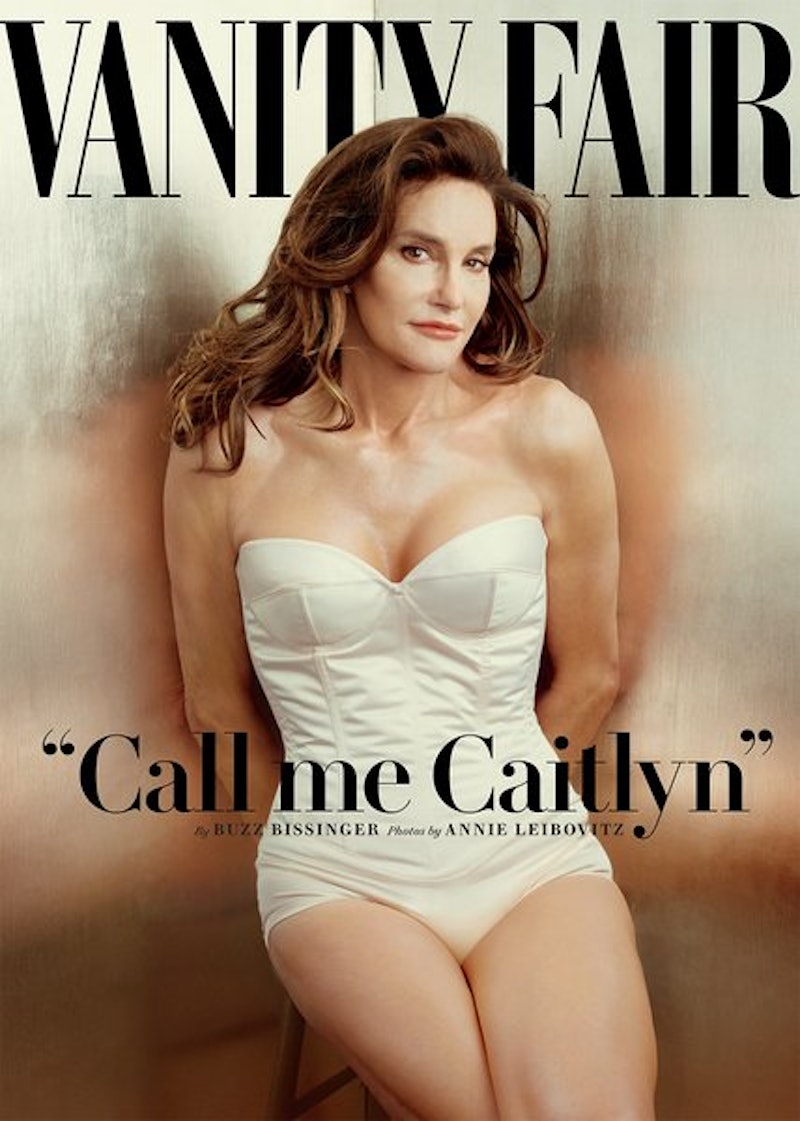 Today, Caitlyn Jenner has arrived on the scene in a Vanity Fair article by Buzz Bissinger, with accompanying photos shot by Annie Liebowitz, and all hail because she is gorgeous. I'm sure I'm not alone when I say that I am very, very jealous of Caitlyn Jenner — but in the best way possible. In this case, it's absolutely a compliment.

Liebowitz took the photographs in Jenner's Malibu home, and she genuinely looks like a old Hollywood screen siren. The article is touching, and will hopefully result in the kind of incredible support for Jenner and her family that followed the hotly anticipated 20/20 interview that aired in April.

Caitlyn is both an American and Irish name meaning "pure." While it may come as a surprise that Caitlyn chose to spell her name with a C as opposed to a K (thus breaking the family tradition of Kris, Kim, Khloé, Kourtney, Kendall, and Kylie), Bustle's Martha Sorren pointed out, "it's important to note that this is who Jenner has been her whole life. We don't know when Jenner chose her name, but it's more than likely she was Caitlyn before she'd even met Kris Jenner."

While I wish Caitlyn all the best, it's hard not to be a little bit jealous of her grace and beauty. Here are my top 15 reasons to be jealous of Caitlyn Jenner — which, really, are just things to aspire to, aren't they?

1. She's 65 and looks incredible in lingerie.

Seriously, look at those legs.

Her Vanity Fair cover has sparked the hashtag: #CallMeCaitlyn, which could spur awareness and positive progress for the trans community. Besides, who wouldn't want their own hashtag?

3. Her article was written by Buzz Bissinger and shot by Annie Liebowitz.

When the author of Friday Night Lights writes your story and it's accompanied by photos taken by one of the world's most well-known photographers, you know you've done something right.

4. She looks so happy and confident in this video.

Just imagine finally letting go of that burden after so long. Such spiritual freedom is something to aspire to.

5. She has a super supportive family.

Say what you will about the Kardashian family, but they're intensely loyal and you know they love each other fiercely — no matter what.

6. She's still got that gold medal.

I'll never have an Olympic medal, but Caitlyn has one, and that's awesome.

And it's a beautiful one.

9. "Call Me Caitlyn" sounds like a great song title.

Perhaps a collaboration with Carly Rae Jepson is in the works?

Kim breaking the Internet is so passé. Now Caitlyn is here to break the Internet, and it's officially the best.

11. She already has a celeb doppleganger.

It's not perfect, but it's pretty good, no?

12. That nude corset bodysuit is everything.

So beautiful. She rocks a bodysuit like she learned from the best.

13. She has a chance to change the way we talk about trans individuals.

Which is a huge opportunity, and one that stands to spur so much good in the world.

14. The gowns she wears in her Vanity Fair shoot are unreal.

It's like the Oscars times 100. So gorgeous! Can I get a fashion stylist please?

We're all excited and hoping that Caitlyn feels as free and happy forever as she looks in these photos.