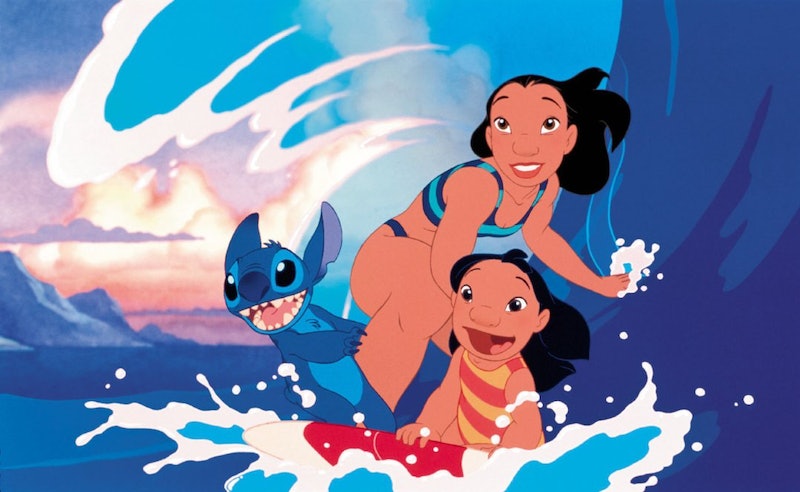 Let's get one thing clear, Lilo & Stitch is hands down one of the most underrated Disney movies out there. The story of a young Hawaiian girl named Lilo who adopts a genetic experiment as her dog, demonstrated Disney's imaginative and innovation craftsmanship with a sophisticated and authentic story about the ups-and-downs of life. Through this 2002 film, a beacon of realism was finally ignited in a Disney creation and its inherent trickling down affect on young children who sat in the theater watching this uniquely tormented girl find her place in the world, proved to be timeless. The underlying foundations of a broken family, the importance of love, growing up, friendship, and the life lessons in Lilo & Stitch came to hold the paramount catalyst to a widespread language we could finally speak.

In addition to being an all-embracing journey, Lilo & Stitch broke a number of molds when it addressed issues on beauty, body image, feminism, self-identification, and even, finding acceptance in well, weirdness. Peppered with beautiful Hawaiian scenery, hilarious one-liners, and a real sense of living, Lilo & Stitch is one of my favorite Disney films because of the heart and emotion behind the film that puts true notability on connection. Most importantly, no matter who you are, the feeling of finding yourself with the help of loved ones and learning self-respect is an incredible lesson to learn in life that can only been seen while watching Lilo and Stitch navigate through economic hardships, aliens, and destructive tendencies.

It's no wonder that picking out the most pivotal, liberating, and important life lessons I learned from Lilo & Stitch was an extremely easy task because of how many there were to choose from. So without further suspense, here are 11 of the most groundbreaking life lessons Lilo & Stitch instilled in all of us.

The deep canvas of the film came from the juxtaposition of both Lilo and experiment 626, aka "Stitch," being outsiders to their inherent atmospheres. Stitch was an alien built solely for destruction, even his creator Jumba said, "626 was designed to be a monster, but now he has nothing to destroy. You see, I never gave him a greater purpose. What must it be like to have nothing, not even memories to look back on in the middle of the night?"

Lilo herself, made her own green barbie, liked to feed wild fish, and was an Elvis enthusiast, all at a young age. Not to mention, she also had the dark humor of a 21-year-old. Both Lilo and Stitch did not belong in a world filled of idealistic perceptions and archetypes of what a young girl or "dog/destructive alien" should be. Together, they both learned that when "no one gets left behind" it means you must embrace your weirdness and your differences to make the world a much more beautiful mosaic.

2. Dramatic Tendencies Are Good For The Soul

Besides Lilo being an authentic girl, she was also a dramatic young girl. Though not everyone can keep up with rich imaginations, having a personality full of passion, emotion, and most importantly, enthusiasm is a way to make life feel effortless and light, even in the toughest situations.

3. It's Much Easier To Cope With Life When You Can Laugh About It

Just like dramatic inclinations, there is definitely some scientific truth behind the saying "laughter is the best medicine." Even though, this animated film addresses some grim themes, Stitch always had the ability to allow laughter and smiles to be shared. One of my favorite features about this film is just how brilliantly it is written with scenes that keep me laughing more and more each time around. Though it's easier said then done, adding humor and laughing in the face of your adversity is one way to get through this crazy thing called life.

4. Women Come In All Shapes, Sizes, And Colors

Though Lilo and her older sister Nani were only cartoons, Nani's dark-skinned, chubby-fingered, pug-nosed and curvy hips were real depictions of body types and even colors. Both Lilo and Nani were among the few culturally-rich and colored cartoons in the Disney world — even more incredible, they didn't make a big deal out of it, either.

5. There Is Power In Kindness And Redemption

In the middle of the film, I crumble at the moment that Stitch understands the revelation of kindness and redemption in human beings. After Lilo tells him about how she lost her parents, Stitch leaves her to fall asleep and he reads the Ugly Duckling. It is in those moments of pouring over the pages of the children's story that Stitch realizes he's lost, and I literally can't even. Stitch comes to a crossroads that he must decide whether to live with his birthright of destruction or take the kindness and heart Lilo has gifted him with and rebuild.

6. You Don't Need To Be A Damsel In Distress To Find Love

Going back to Nani, she was honestly one of the realest women Disney has ever presented since Mulan. Nani had a budding romance with her coworker, David, but their relationship never took center stage to the story's message or its core. Their relationship was always a what-if and second burner to Nani's real goals and plans. Something even more beautiful was how it was never painted as a dire necessity or an underlying impression to succeed in life.

7. You Can Be Female And Still Lead A Galaxy

Adding another element of feminist power to the list, Lilo & Stitch also carry the influential theme that women can be leaders and strong authoritative figures. The Grand Councilwoman was one of the most feared creatures from each of her male counterparts in the entire film. She also was one female figure in a Disney film who, though carried great power being the leader of the United Galactic Federation, she was not a discredited villainess. Way to go, Disney!

8. Having Siblings Can Be Rough, But Always Rewarding

I have two older sisters, and no film has ever conveyed what it's truly like to have a female sibling than this film. Though like true sisters Nani and Lilo fought like cats and dogs, at the end of the day, the movie showed no bond was greater than the people you have shared your childhood with, especially when you know you will always protect each other until your dying day — unsurprisingly, Lilo and Nani exemplify this throughout every facet of the film.

9. In Economic Hardships, It's Important To Keep Trying And Move Forward

Although Lilo & Stitch did a great job at showing how beautiful Hawaii was, it also showed the real Hawaii. In the depressed economy, Nani struggles throughout the entire film to find and keep a job, as well as how hard it was to create the perfect single parent household. Despite these inner workings of the struggles of poverty, Nani never once let Lilo see her down and she demonstrated above all else that perseverance and hard-work pay off both financially and mentally like when she told Lilo: "Sometimes you try your hardest, but things don’t work out the way you want them to. Some times things have to change and maybe sometimes they’re for the better…"

10. People Can And Will Surprise You

It's not always that a leopard can't change his spots and Stitch taught Lilo, Nani and Jumba this when he fought past his urges for destruction and saved Lilo, debunking their previous assumptions that not everyone can surprise you, if you believe in them.

11. "Ohana" Means Family And Family Means Nobody Gets Left Behind Or Forgotten

Not surprisingly, Lilo and Nani lived by the family principle that everyone belongs. The feeling you get while two outsiders find their home is an indescribable emotion and more than that it pushes the message that everyone has their place in this world if you surround yourself with anyone who loves you.

Lilo & Stitch withstood many tests that a lot of children's films so commonly get wrong. This certified Disney hit had the mastery to take real issues and life struggles and turn them into a relatable story line filled with humor, lovable characters, and honest purpose. With that came lessons about body image, love, family, and finding your true self — it's no wonder, that it always keeps me coming back for more.