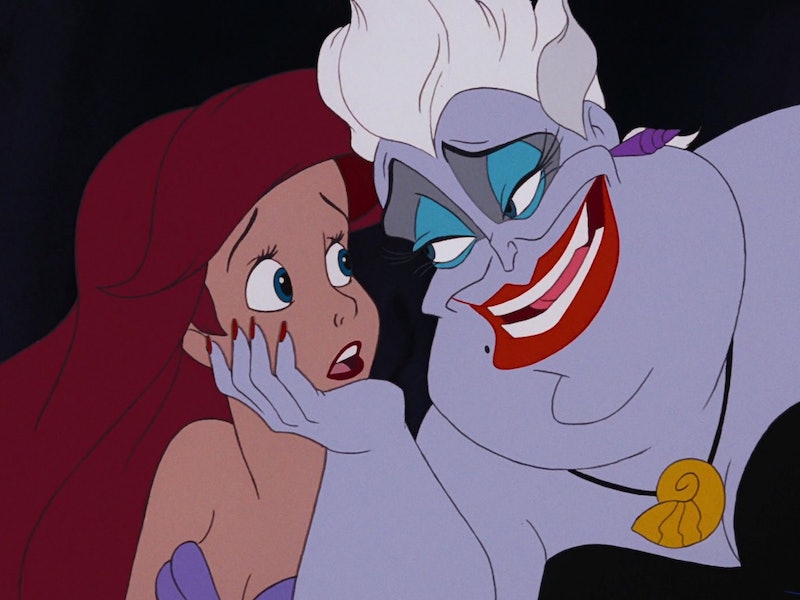 Disney princesses get all the credit, not to mention, all the luck. When it comes to the female Disney villains, the witch, evil stepmother or even the once highly praised queen never gets her wishes, always dies, and, most definitely, triggers a few nightmares. Though all these women like — Mother Gothel and Ursula — are active, protective, strong, courageous and, yes, OK, occasionally envious, they immediately become feared, devouring, conniving, beastly in the face of a princess. And yet I still can't help but believe that each female Disney villain is admirable in their own unique ways.

The wicked stepmother, the evil octopus woman, even a woman who deserves to be put on PETA's hit list, they all have admirable and courageous traits that we all have unfortunately missed because Disney movies did our thinking for us. But it is time to put an end to that right now, because Ursula needs a little love too. Those beloved childhood films may have given us princesses as heroes to look up to, but they also gave us compelling villains who were more than just evil. Even though these women would still probably haunt your dreams, they are strong, independent, can-do ladies, and that doesn't make them evil. (Their eight tentacles may do that.) It's time that I show you all the actually incredible qualities that each of your favorite, yet most feared, Disney villainess had. Then you'll see how much we can all identify.

I know, I know, it's hard to wrap your mind around a woman who wanted to skin 99 puppies alive just for the latest fashion item. Still, Cruella exuded more self-esteem than any woman could possibly aim to have. Everything about her screamed attention, from her provocative style of dressing to her eccentric interior design right down to her black-and-white-striped car. Though she lacks emotional depth and only married her husband because he is a furrier, her assertiveness and self-assurance ensures that everyone complies with her demands.

Lady Tremaine's abuse of Cinderella was indeed severe. And yet Cinderella's wicked stepmother had one of the greatest qualities any woman can possibly try to attain: selfless love as a mother. Though Cinderella was the heroine of her tale, she was not Lady Tremaine's blood, and, therefore, not her priority. Her first priority is her children and getting them the prince of their dreams. It can be hard to think of her as loving considering her cruelty on Cinderella, but it was all done out of love for her daughters who, unfortunately, didn't share Cinderella's good looks or bright spirit.

I would curse a lot of people too if I wasn't invited to a party, even a baby. One thing I adore about Maleficent was her ability to never apologized for her convictions. Instead of letting things go or given up on her evil ambitions, Maleficent always stood up for herself and never comprised her beliefs. By the time we meet her in this fairy tale, she’s already realized her potential, and she takes every opportunity to commit to every action no matter how far she has to go. That’s just as valuable a life lesson as forgiveness, folks.

Ursula constantly challenged male value, and one of the most important life lessons you could learn as a young girl, I learned from her: to love your body. Before there was Kim K, there was Ursula. She had curves in all the right places, and she knew how to use them to her advantage. Remember: "Don't underestimate the importance of body language."

5. Determination In Evil Queen — Snow White and the Seven Dwarfs (1937)

The villainess in Snow White and the Seven Dwarfs wanted so badly to be the fairest of them all, so much so that she went as far as to have Snow White killed and have her heart placed in a box. After the Evil Queen discovers that the Huntsman she hired to kill Snow White is unsuccessful, she uses magic to concoct a poison to deal with the situation herself. The Evil Queen's determination becomes her obsession, and it gives off the implicit message that, no matter what you want or desire, if you work hard and get creative, you will find whatever means to achieve your goal.

The Queen of Hearts may have been the bloodthirsty ruler of Wonderland, but she was also the most dignified. Though she was behind many beheadings, she always curtsied, was constantly proper, and held her head quite high in her time of leading.

Many Disney heroes normally have sidekicks; this time, Yzma did. After she was fired by Emperor Kuzco for trying to rule his kingdom behind his back, she plots to become the Empress of the Incan Empire. But she doesn't do it alone. She enlists in the help of Kronk, and, with brutal honesty and hilarity, she delegates perfectly and values teamwork. Even if the team was #TeamYzma.

Mother Gothel was motivated by her desire for immortality, to stay young and beautiful. Because of this, she keeps a magical flower hidden, and, unfortunately, uses Rapunzel as an instrument for this goal. Her selfishness did make her evil, but it's a trait to take into serious consideration because it's not always evil. Sometimes we all need to be a little selfish now and then for our own personal mental health.

Though Disney fairy tale films don't emphasize the perspective of villainesses, and though these ladies are evil, the films do make one thing clear: that evil can be understandable. Each of the good traits hidden within each Disney villainess proves that weren't entirely evil. Though they used these traits for good, they had ambition, strategy, and work ethic. Definitely something to strive for, even if we can't call them role models.