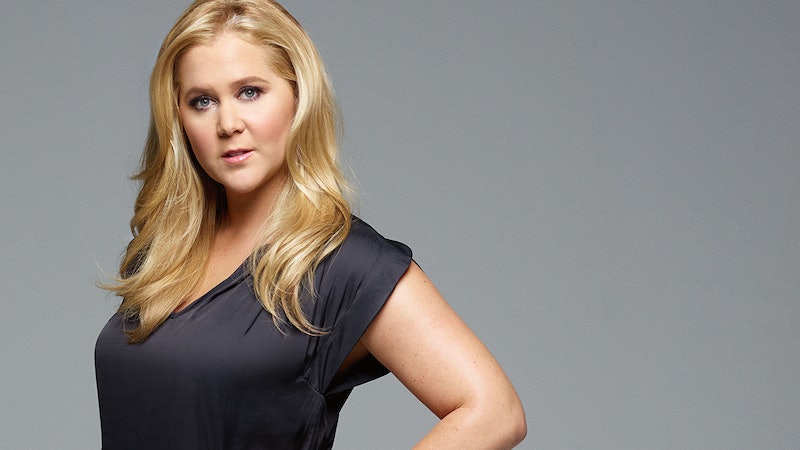 The Thursday night episode of Inside Amy Schumer debuted a sketch about Internet trolling that will really make you think. As an outspoken feminist (both in life and on social media), I've grown accustomed to clicking "block" several times a week after a random guy graciously schools me about how sexism is a myth and feminism is for ugly women. Like many other women, I've learned to (mostly) brush these comments off — but many of us have, at one time or another, received violent threats on social media for expressing our views.

The sketch features a show called "Chip Chat," and the featured guest is a VP of Communications for a popular social media site. She explains that people like to have a shortcut for something they frequently communicate — which is why she is proud to present the "I'm going to rape and kill you" button. Now, trolls can express that notion and use the site's limited characters for other comments about the women they're harassing. This sketch is frighteningly realistic — just ask Jessica Valenti, a high-profile feminist writer for The Guardian. Earlier this month, she penned an article about being the outlet's No. 1 receiver of insults and threats. She wrote:

I’m tired of logging into Twitter or Facebook just to dodge rape and death threats in response to my articles; the latest one I got came on a Sunday evening just after my family and I had finished dinner.... Because the harassment doesn’t begin and end on the Guardian website – being on social media has become, for better or worse, part of being a writer online. And the things you publish for one site have a ripple effect across all of your various social media profiles. It’s a workplace harassment issue that doesn’t stop at the workplace.

Furthermore, Valenti raised this discouraging point — when she speaks with young women on college campuses, many of them express their desire to become writers but they fear they can't handle the online abuse. Unfortunately, it's a legitimate concern — like pretty much every feminist writer I know, I've received more insulting, sexist Internet messages than I can count. Although some days it's easy to laugh them off, there are times when it's just depressing — not because I care that some random Trump supporter has called me ugly, but because there are people out there who think it's fine to spend their time berating women who stand up for our rights.

The VP of Communications goes on to explain that this feature has been years in the making — the beta version was "you're fat," but they found that people prefer to type that one out so they can misspell "you're" as incorrectly as they please. (Again, this is painfully realistic.) And, why do these features exist, the interviewer asks? Her answer is spot on: the users would like to rob a stranger of her confidence because they feel "powerless and invisible." She adds that they added the "rape and kill" feature because, "what's the point of using the Internet to call someone fat when you can also make them feel physically threatened?"

The most important takeaway from this sketch is the pure cowardice, ignorance, and laziness of Internet trolls. They have no interest in any sort of intelligent political debate — they simply prefer to berate and threaten women in 140 characters or less. And, they'd likely be overjoyed if a button existed that meant they could do this without even typing.