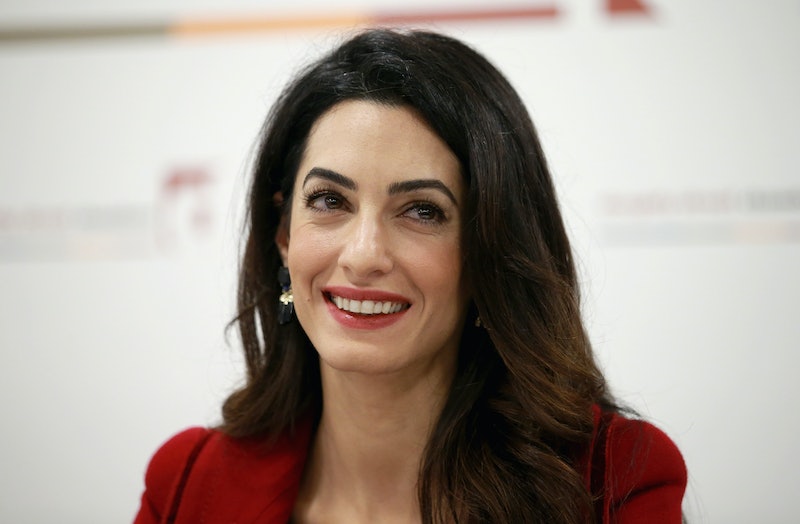 Donald Trump has been sweeping recent primaries, and is getting closer and closer to securing the Republican presidential nomination. This perplexes international human rights lawyer Amal Clooney, who on Tuesday challenged Trump's comments about Muslims, Mexicans, and women in an interview with BBC. Clooney criticized both Trump and the media for circulating generalizations about different groups across the axes of race, gender, and religion, and condemned Trump's comments about Mexican immigrants. Subsequently, in response to Trump's proposal to ban Muslims from entering the United States, Clooney — whose parents are Muslim — did not let the Republican front-runner off the hook:

If you actually look at what he specifically said in that now infamous speech about Muslims, he kept saying, "They only want jihad. They don’t believe in our way of life. They don’t respect our system." And when he says "they" and you watch the media coverage afterwards, people, I think, should have been saying "Do you mean the 1.5 billion people around the world who fit that description? Do you mean the people who are U.S. citizens, who are members of your military ... the vast majority of whom are not violent or extremists in any way?"

Clooney, who, with her husband, hosted a $33,400-per-person fundraising dinner for Democratic presidential candidate Hillary Clinton's campaign earlier this month, also addressed Trump's appalling remarks about women, saying that he is unlikely to perform well among women in the general election due to his high negative rating. Clooney also referenced a Republican PAC ad that featured women reading a selection of sexist remarks Trump has made:

She went one step further, expressing satisfaction at the possibility that Trump would likely lose the general election to Clinton if the latter were to receive the Democratic presidential nomination. “If, at the end of all of this, he gets beaten by the person who becomes the first female president of the United States, then I think that would send a very positive message from the electorate back to him as to what they really think of those points of view,” Clooney said.

These comments are especially relevant following Trump's latest set of comments about Clinton playing the "woman card," and speak to the significance of politics in 2016 — as Clooney pointed out, extreme points of view like Trump's make this a critical election, especially given the amount of support he has been receiving. You can watch Clooney's full BBC interview below; the segment about Trump starts eights minutes in.