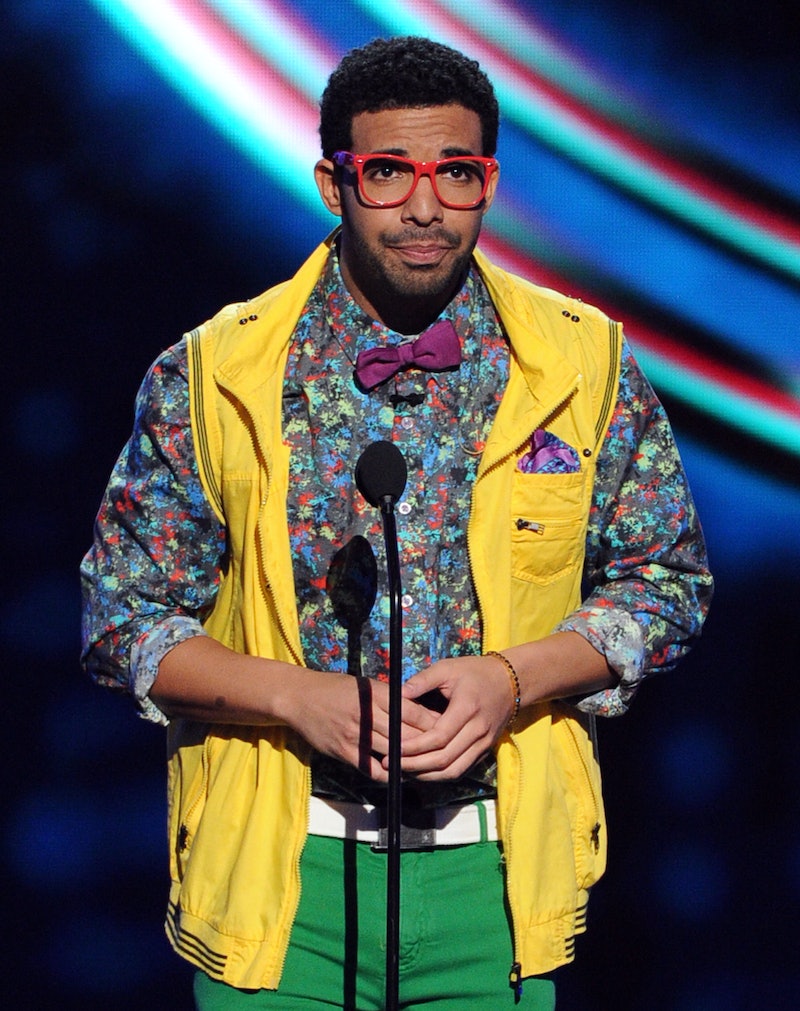 Drake is 29-years-old, handsome, and probably allergic to lasting relationships. Which means the obvious: he's dated a whole lot of women. Does he date for dating's sake? For really salubrious entries in his dream diary? Does he date purely to collect new material for his songs? Or does he really have chemistry with that many women? (It's the latter. Definitely the latter. He and I have chemistry just from me listening to his album, OK.) Perhaps a little of all of the above, because the new Drake album Views wouldn't be a signature Aubrey Graham production without a whole lot of shoutouts to old flames. So, who exactly is Drake's Views about?

Let's get this reference party started. We'll start with the opening track, the lush string production "Keep The Family Close." It's business as usual with Drake getting shamelessly petty about an unnamed woman he used to be involved with. “And it’s all because you chose a side / You're supposed to put your pride aside and ride for me / Guess it wasn't time / And of course you went and chose a side that wasn't mine,” he sings at the bridge. Obviously, you could insert any ex here, but I'm going to assume this one could be about non-ex Nicki Minaj, because of the very public feud Drake and Minaj's new boyfriend rapper Meek Mill had last year.

Let's skip to "Hype" which showcases the first of multiple references/shoutouts to Drake's other super-famous-ex, Rihanna. While Drake boasts about how far he's come he's quick to reference having the hottest woman in music around, asking us “Don’t you see Riri right next to me?” Later, he'll use Rihanna again to strengthen his position as the coolest cat in rap when he speaks in "Faithful": "“Working, working, working, working, ain't ya? / You don't have no time to lay up.” I'm guessing this is a reference to his "work" watching Rihanna shake it in front of him. And if you'd missed the reference, Drake repeats it again in the same song when he says "I want to watch you do Work while I sit back." Like in the video, remember?

But, unlike Minaj, Rihanna's actually on the album and she's quick to re-establish their friendship in "Too Good," in which she sings “And last night I think I lost my patience / Last night I got high as the expectations / Last night, I came to a realization / And I hope you can take it.” Us, too. Drake's never been famous for moving past his exes all that fast.

On moody slow jam "Fire And Desire," Drake signals an ex-ref with an extremely subtle and classy musical clue, sampling the Brandy track, "I Dedicate (Pt. 1)"

The song is addressed to a lady who's already got someone, with lines like "Throwin' dirt on my old name" and "Me I'm movin' quiet, all the things we're tryin'/Let's just keep it private." I have no idea who this one could be about, unless his crush on Minaj has come back with a vengeance.

In short: new album, same old Drake. Just as in Drake once sung “We live in a generation of not being in love and not being together” (see: "Doing It Wrong"), Views is first and foremost a tribute to being single and having a whole lot of exes. Could be worse, guys: at least it's catchy.

More like this
Tristan Thompson Plays Drake’s Best Man In A Music Video Wedding With 23 Brides
By Grace Wehniainen
Drake’s Net Worth Will Have Critics Saying “Honestly, Nevermind”
By Hugh McIntyre
Beyoncé Delivers “Soaring Vocals” On New Album “Renaissance”
By El Hunt and Radhika Menon
Everything To Know About J-Hope From BTS’ Solo Album ‘Jack In The Box’
By Stephanie Topacio Long
Get Even More From Bustle — Sign Up For The Newsletter