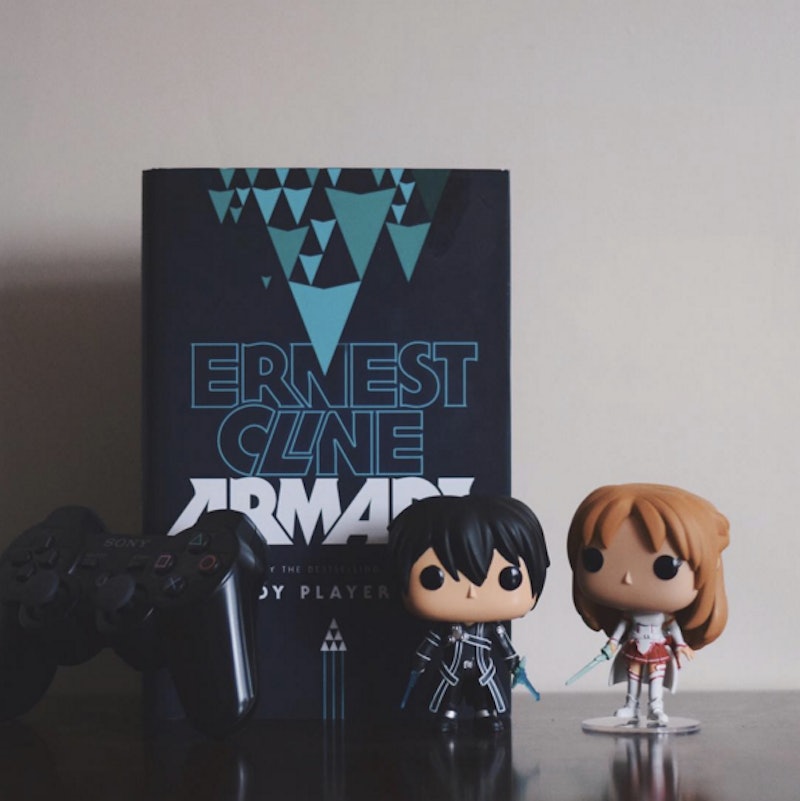 Ernest Cline is living every nerd's dream: his first novel, the bestselling, highly acclaimed Ready Player One , is being adapted into a movie by none other than Steven Spielberg. Due for a 2017 release, the movie stars Tye Sheridan as Wade Watts, Olivia Cookie as Art3mis!, Simon Pegg as Ogden Morrow, and Ben Mendelsohn and Nolan Sorrento.

"I pinched myself a few hundred times to make sure I wasn't dreaming," Cline tells Bustle, adding that Spielberg's Indiana Jones films inspired elements of Ready Player One and E.T. and Close Encounters played a large role in the development of his second novel, Armada . "[Spielberg's] work has influenced me throughout my life and writing career, so it's a dream come true to have the opportunity to collaborate with him on the film adaptation of a story that his work helped inspire."

Cline makes no secret of the "nerdy" obsessions that play a huge role in his life and his work. His favorite film? Star Wars Episode IV — A New Hope. His preferred hobby? Video games. His ride of choice? Well, he owns not one but two DeLoreans — one of which he lent to George R. R. Martin to promote the opening of his new bar. He even drove the time-traveling car across the country on his Ready Player One book tour, though he (wisely) opted against it for the Armada tour.

"I discovered that it's not really safe to drive a tricked-out DeLorean on the interstate highway system," he says. "The people around you are often swerving/driving recklessly while they attempt to snap a photo of your car to post on Facebook. There are safer ways to travel."

Later this year, the paperback edition of Armada will hit bookstores everywhere. The novel, originally released in 2015, follows Zack Lightman, a teenage boy who dreams of a life more like the world of his favorite video game, Armada. But what happens when his dream becomes a reality, and he's forced to become the video game-playing hero he always aspired to be?

When an alien invasion threatens to destroy the world as we know it, Zack and other top-performing video gamers are transported to a secret military facility in middle America. There, they learn about the Earth Defense Alliance (EDA), an organization that created the Armada video game as a simulation of an imminent alien attack. Zack and his fellow recruits are the top-performing video gamers in the world — and they are the only ones who can stop the aliens from invading.

Cline, like any proper nerd, would jump at the chance to join the EDA if it existed in real life. "I would have to pitch in and use my gamer skills to save the world," he says. "But I would prefer to stay here in Austin [Texas] and telecommute, so I could fight off the invasion from the comfort of my couch, without changing out of my pajamas."

In celebration of the paperback release of Armada on April 12, Bustle has an excerpt from the novel. Read it below, and buy Armada wherever books are sold:

I didn’t remember unzipping my backpack, or taking out the tire iron, but I must have, because now I had the cold steel rod clenched in my hand, and I was raising it to strike.

All three of my opponents stood frozen for a moment, their eyes wide. The Lennys threw up their hands and started backing away. Knotcher’s eyes flicked over to them, and I saw him registering that his simian pals had bowed out of the fight. He started moving backward too.

I looked at the curb a few feet behind him, had a nasty thought, and followed through on it by lunging at Knotcher with the tire iron. He lurched backward and—just as I’d hoped—caught a heel on the concrete rise and landed flat on his back.

And then I was standing over him, looking down at the tire iron clutched in my hands.

Off to my left, someone screamed. My head snapped around and I saw that an audience had gathered— a handful of students on their way in to first period. Among them one girl, too young and deer-in-the-headlights to be anything but a freshman, slapped a hand over her mouth and flinched backward as I looked her way. As if she was terrified that I—Zack the school psycho—would choose her as my next target.

I glanced back at the Lennys, who were now standing among the students who had gathered to watch the fight. All of the onlookers seemed to be wearing the same expression of horrified anticipation, as if they believed they might be seconds away from witnessing their first homicide.

I glanced back at the Lennys, who were now standing among the students who had gathered to watch the fight. All of the onlookers seemed to be wearing the same expression of horrified anticipation, as if they believed they might be seconds away from witnessing their first homicide.

A wave of cold shame washed over me as the intensity of my rage faded away. I looked down at the tire iron clutched in my hands and let it clatter to the pavement. I heard a chorus of nervous laughter behind me, along with more than one relieved sigh.

I stepped away from Knotcher. He slowly got to his feet. We stared at each other for a moment, and he looked as if he was about to say something when his gaze shot upward, focused on something in the sky behind me.

When I turned around, I saw a strange-looking aircraft approaching from the east, moving at an incredible speed. The closer it got, the more familiar it looked. My brain still refused to accept what my eyes were seeing—until a few seconds later, when the craft braked to a dead stop and hovered directly over us, close enough for me to make out the Earth Defense Alliance crest stenciled on the side of its armored hull.

When I turned around, I saw a strange-looking aircraft approaching from the east, moving at an incredible speed. The closer it got, the more familiar it looked. My brain still refused to accept what my eyes were seeing—until a few seconds later, when the craft braked to a dead stop and hovered directly over us, close enough for me to make out the Earth Defense Alliance crest stenciled on the side of its armored hull.

“No way,” I heard someone whisper. A second later, I realized it was me.

It was an ATS-31 Aerospace Troop Shuttle, one of the ships used by the Earth Defense Alliance in both Armada and Terra Firma. And it was about to land in front of my high school.

I definitely wasn’t hallucinating this time: Dozens of other people were staring up at the shuttle in amazement, too. And I could hear the rumble of the shuttle’s fusion engines and feel the heat from their exhaust buffeting my face. It was really up there.

As the shuttle began to descend, everyone in my vicinity scattered like roaches, heading for the safety of the school.

I just stood there like a statue, unable to look away. The ship was identical to the troop shuttles I’d piloted while playing Armada, right down to the EDA crest and identification bar code stamped on the underside of its hull.

The Earth Defense Alliance can’t be real, Zack, I assured myself. And neither can that shuttle you think you’re looking at right now. You are hallucinating again, only it’s much worse this time. This time, you’re having a full-on psychotic break.

Reprinted from Armada Copyright © 2015 by Dark All Day, Inc. Published by Broadway Books, an imprint of the Crown Publishing Group, a division of Random House LLC.