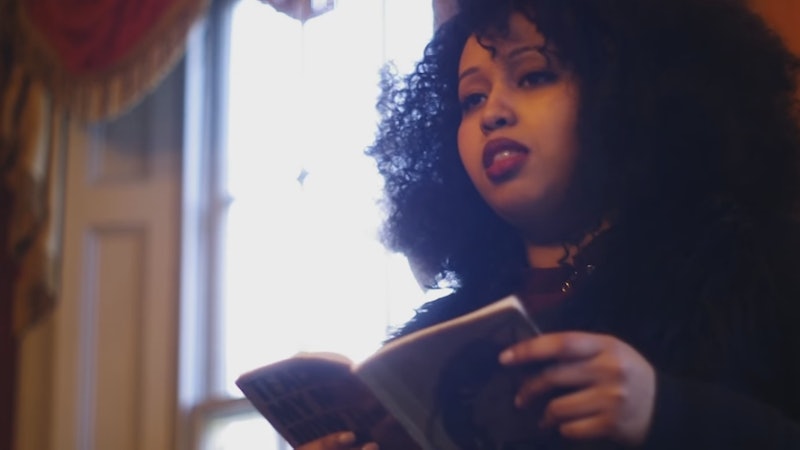 Ever since Beyoncé dropped Lemonade on us like an atom bomb, the Bey Hive has been clamoring for more Warsan Shire quotes. Beyoncé quotes Shire throughout Lemonade, much as she did with Chimamanda Ngozi Adichie in "Flawless." Now, the first Young Poet Laureate of London has a whole new following.

Born in Kenya to Somali parents, Shire grew up in London. Her poetry explores refugee and immigrant experiences, family, identity, and black womanhood. The 27-year-old poet established a digital following with deep and infinitely shareable verses, like this one: "Two people who were once very close can / without blame / or grand betrayal / become strangers. / Perhaps this is the saddest thing in the world."

Shire's work isn't limited to YouTube videos and motivational posters, however. From The New York Times:

Ms. Shire has published chapbooks of poetry — including “Teaching My Mother How to Give Birth” in 2011 and “Her Blue Body” in 2015 — but much of her reputation was built online by publishing on Tumblr and using Twitter like an open notebook. In 2014, she was appointed the first Young Poet Laureate of London. Her first full poetry collection, “Extreme Girlhood,” is expected in the next year or so.

The poet declined to be interviewed for the piece above, but The Well & Often Reader published an excellent and lengthy chat with her back in 2012. According to Vogue, "Shire has not granted an interview in years," and made her sole comment on Lemonade, as of this writing, in an April 26 tweet.

The "yosra" in question is Yosra El-Essawy, Beyoncé's tour photographer, who died of cancer in 2014 at age 33. The New York Times reports that El-Essawy "served as an early link between the worlds of the young British poet and Queen Bey."

To call Shire's poetry powerful is a tremendous understatement. She has a massive body of work, relative to her age, and, although some of her poems are more popular than others, every one of them astounds. As a brief sampling, I've picked five quotes that will empower all the single ladies out there. Check them out below, and share your favorite Warsan Shire quotes with me on Twitter.

1. "You are terrifying, and strange, and beautiful / Something not everyone knows how to love."

— "for women who are difficult to love"

2. "It is not my responsibility to be beautiful, I'm not alive for that purpose. My existence is not about how desirable you find me."

3. "You want me to be a tragic backdrop so that you can appear to be illuminated, so that people can say ‘Wow, isn’t he so terribly brave to love a girl who is so obviously sad?’ You think I’ll be the dark sky so you can be the star? I’ll swallow you whole."

— "the unbearable weight of staying — (the end of the relationship)"