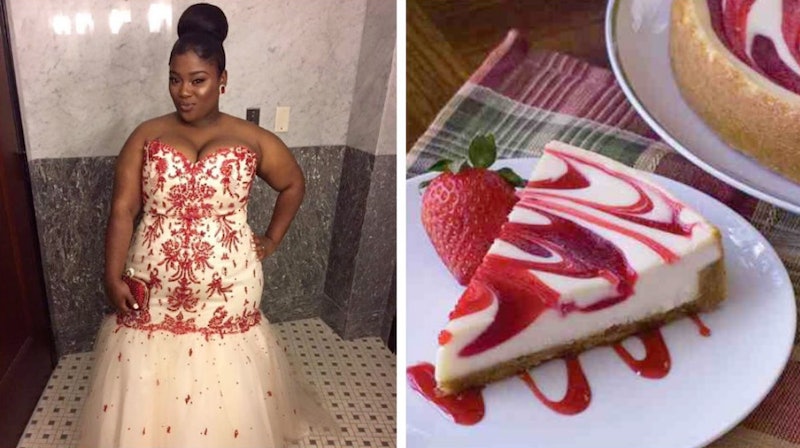 Twitter is often a hotbed for negativity, but one user turned a hurtful comment into an epic way to bring together women and promote positive body image. Trending tag #CompareYourselfToCheesecake2016 has become all sorts of powerful thanks to one fierce body-positive tweeter. But unfortunately, the tag was created for a less-than-awesome reason.

As shared on Cosmopolitan, 18-year-old Kerione posted a #stunner prom pic of herself on Twitter. Then, Twitter user "2 Pump Chump" decided to bully the gorgeous lady by posting Kerione's pic next to a piece of strawberry cheesecake, insulting her beautiful prom look and captioning the whole thing with five skull emojis.

But then, in an awesome move from body positive activist Kenna Sharp (@KENNABBBY), #CompareYourselfToCheesecake2016 was born. She encouraged Twitter users everywhere to post a pic of themselves with cheesecake, to help prove that nothing is better than looking like a freaking delicious piece of cake. On coming up with the tag, Sharp told Mashable, "I've dealt with so much harassment and bullying online ... It's something that doesn't even phase me anymore but when somebody else is being attacked for things they shouldn't be attacked for, I feel extremely inclined to come to their defense."

Is that complete awesomeness or what? Since Sharp's tag managed to go viral, below are the most impactful tweets from #CompareYourselfToCheesecake2016 and they send incredibly fierce anti-bullying and positive body image messages. And no, it's definitely not too late to get in on the action!

First, I think it's safe to say everyone totally made Kerione's day, because look at her super pumped response to the tag:

This is Sharp's tweet that kicked the whole thing off.

And how great are the words accompanying this one?

Although, Hannah Hart didn't post a pic, I love what she said!

Even boys got in on it!

And can we appreciate this ombre?