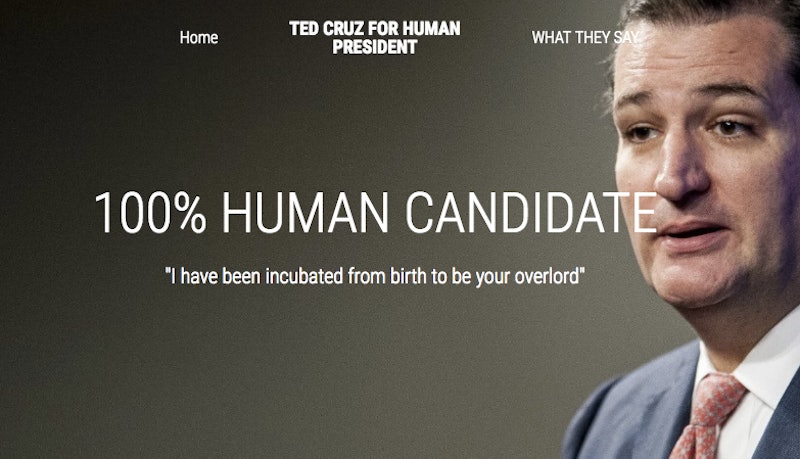 The only thing better than a presidential election is a ~presidential conspiracy theory~. And luckily there have been plenty of those this year, particularly with Republican candidate Ted Cruz. "Ted Cruz For Human President" is the website you didn't know you needed, but have always secretly wanted. Once news broke that he bought 100 cans of Campbell's soup after his honeymoon, people speculated that Cruz is an alien.

There have also been conspiracy theories that Cruz is the Zodiac Killer, a serial killer from the '60s and '70s who terrorized Northern California. Even though this theory has only been based on the similarities in appearance between Cruz and the Zodiac Killer, a poll found that 38 percent of Floridians think it's possible Cruz could actually be the killer. ¯\_(ツ)_/¯

Although the evidence doesn't add up for Cruz to be the Zodiac Killer — Cruz was born in Canada in 1970 and the killer's victims were first murdered in California in 1968 — people are still not entirely convinced that he's not an alien. Among these conspiracy theorists is Deno DeMartino, the creator of TedCruzForHumanPresident.com.

By day, DeMartino, 25, is a digital marketing executive, but by night he is a hilarious Ted-Cruz-alien-conspirator.

DeMartino created the website in March during one of his lunch breaks at work. "Something poorly disguised as something else is always very funny," DeMartino says to Bustle via email.

There have been plenty of moments for DeMartino to speculate that Cruz might not be human, but his main inspiration for the site came from a Gawker video of Cruz and his family. "He seemed like a malfunctioning android," DeMartino said of Cruz's appearance in the video.

As for what really makes DeMartino think Cruz is non-human, he mostly attributed his speculations to the way Cruz looks. (*cough* Zodiac Killer *cough*)

"The fact that he looks like thousands of snakes crammed inside an ill-fitting skin suit. I mean, he seriously, un-ironically called a basketball hoop a basketball ring. A BASKETBALL RING. That was after I made the site, but I think it substantiates my case," he says.

DeMartino's website hilariously captures the sentiment that Cruz might be out-of-this-world, but not in a good way. The "100% Human Candidate" has been "incubated from birth to be your overlord," according to the site's tagline.

If Cruz isn't a human, then he had to have come from a different planet, right? "I can see his crocodile skin and fleshy bloated body doing quite well on a desert planet like mars," DeMartino says.

The "Ted Cruz For Human President" website includes a satirical bio of the presidential (and human) hopeful:

Hello I am Tedcruz Forpresident. I have over 42 years! I wish to shut down the space program and destroy all telescopes, abruptly and without explanation.

There are also incredible fake testimonies of Cruz's qualifications for being president. But these "testimonies" mostly include fake quotes from people trying to convince others that Cruz is an earthling. However, for DeMartino, there are two things that are perhaps more frightening than a leading Republican presidential candidate being an alien: a TedCruz/Carly Fiorina ticket and the remaining candidates.

DeMartino talked about the Cruz/Fiorina partnership, explaining that there could be not one, but two non-humans in office. "If they win, the term 'human' will only be used to reference the beings that used to occupy this planet," DeMartino says.

As for the remaining presidential candidates? "I am terrified," DeMartino says.

More like this
Matt Hancock’s TikTok Is The Most Matt Hancock Thing Ever
By Sam Ramsden
How To Curl Your Hair With Leggings, According To TikTok
By Carolyn Steber
Ashamed Of Your Screen Time Stats? Here's How To Change That
By Alexis Morillo
Learning To Love, Not Judge, The Lunchbox Wives Of TikTok
By Esther Zuckerman
Get Even More From Bustle — Sign Up For The Newsletter
From hair trends to relationship advice, our daily newsletter has everything you need to sound like a person who’s on TikTok, even if you aren’t.