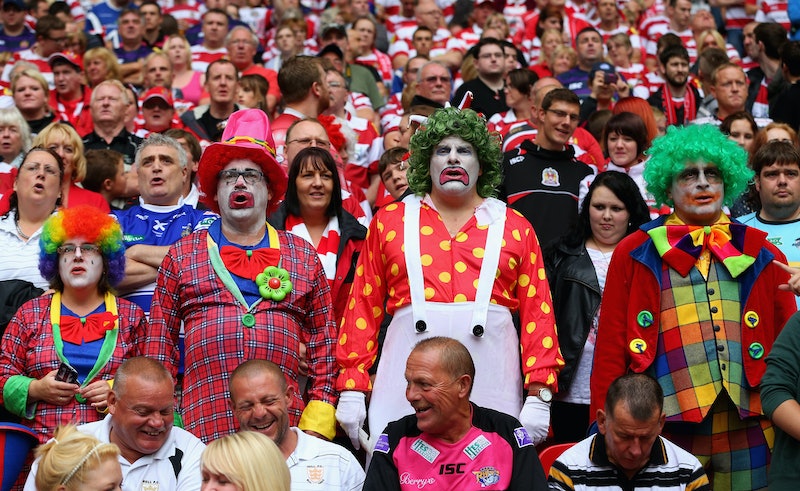 In the midst of growing fears about climate change, income inequality, and the unemployment rate, we've forgotten to worry about this: The clown industry is concerned about its shortage of wacky entertainers. Who would've guessed? According to the New York Daily News, the World Clown Association — which, despite its name, is a real national organization, and is the largest trade organization for clowns in the country — has seen its numbers drop from 3,500 in 2004 to 2,500 this year.

That's about 1,000 less in a decade, or 100 clowns lost per year. And for an organization that was small to begin with, it's a huge number. Clowns of America International has also seen serious drops in membership.

WCA's President Deanna Hartmier, also known by the clown name Dee Dee, pointed to the lack of youthful clowns as the cause. "The challenge is getting younger people involved in clowning. What happens is they go on to high school and college and clowning isn’t cool anymore," she told the New York Daily News . "Clowning is then put on the back burner until their late 40s and early 50s."

Maybe because the younger generation was left terrified by clowns, and took decades to get over it? After all, it's true that most clowns in the WCA are older than 40.

While clowns can earn up to $300 a party, the president of New York Clown Alley Cyrus Zavieh — also known by his clown name, Cido — told the Daily News this wouldn't be enough to convince most young people, who are "thinking about everything other than clowning."

Say it ain't so! Well, on the flip side, clown and filmmaker Jeff Seal told Gothamist that the Daily News report neglects the fact that not all clowns join clown organizations.

There are still a lot of younger people becoming clowns, they're just not joining the Clowns of America International. It's more of a generational thing I think. It's like joining the Shiners club or something like that. Also, maybe it has to do with the weakening of American labor unions in general (just kidding not kidding). Plus, there's a lot of clowns coming out of China who will work for really cheap.

Which begs the question: If there is a shortage of clowns, and since there are a lot of young people struggling for employment at the moment, should career counselors be recommending... clown school?

OK, no. Absolutely not.