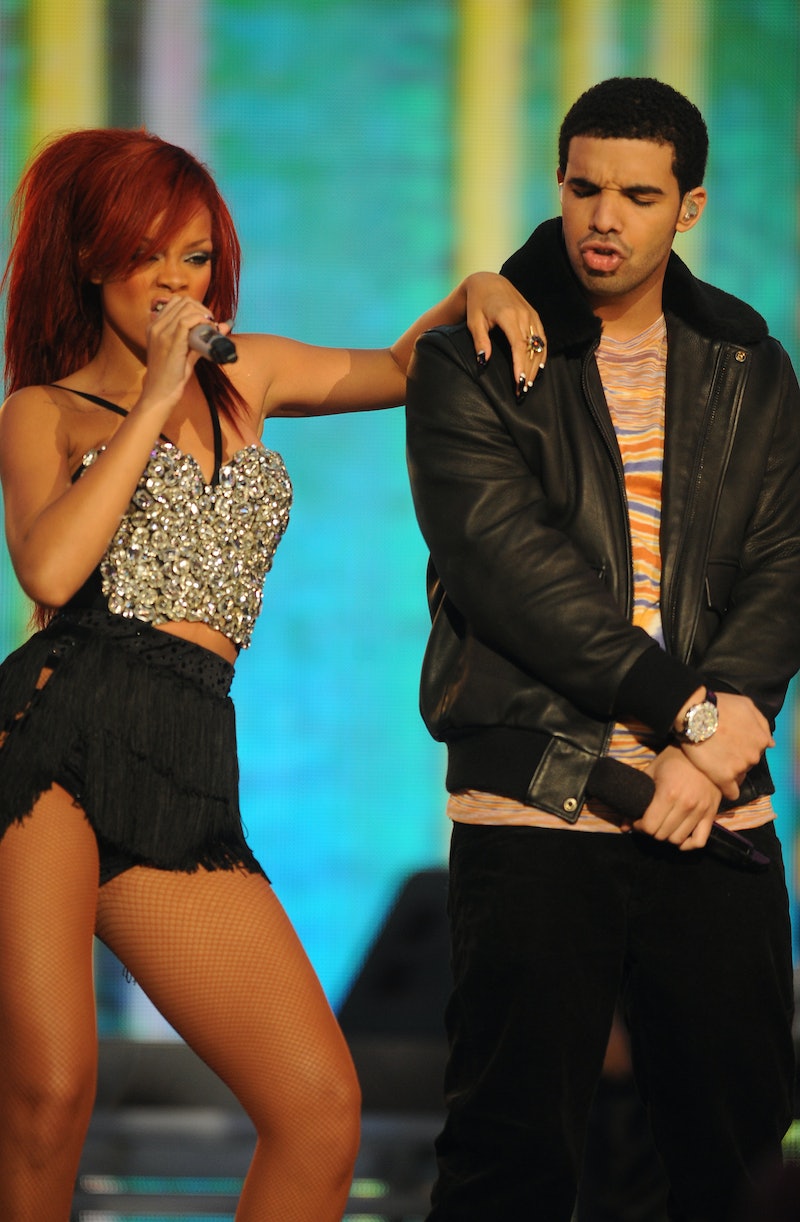 I don't think anyone can deny the palpable chemistry between longtime collaborators and possible paramours Drake and Rihanna. After all, they've been rumored to be "on again/off again" since 2009, and music fans are on both sides of the argument when it comes to Drake and Rihanna as a couple. Some fans, myself included, are obsessed with the idea of Drake and his "ultimate fantasy" someday making it official... while others simply aren't shipping them at all. Each argument has valid points, but Drake and Rihanna's newest collaboration on Views proves how damn good it is when they collaborate. In fact, when the pair comes together musically, it's seriously "too good."

Their song "Too Good" itself seems to be about a longtime couple in despair, based on the lyrics, with Drake crooning, "My friends always feel the need to tell me things / Seems like they're just happier than us these days," which actually makes my heart ache a little bit. Though the couple in the song seem to have a plethora of issues to work through, there are definitely hints that there's more there than meets the eye... or ear, as it may be. Check out the lyrics for yourself and see how this could, just maybe, relate to Drake and Rihanna's own relationship.

Well, this doesn't sound positive. It sounds like the realization that there's a disconnect in the relationship, for sure. This is definitely reminiscent of when Drake told The New York Times in 2010 of Rihanna, "You know what she was doing to me? She was doing exactly what I’ve done to so many women throughout my life, which is show them quality time, then disappear. I was like, wow, this feels terrible." Ouch.

Drake: I don't know how to be there when you need me / It feels like the only time you see me / Is when you turn your head to the side and look at me differently

In 2010, Drake reflected on his relationship, telling Ellen DeGeneres that he and Rih "had our moment." -sad face emoji-

Drake: I'm too good for you / I'm way too good to you / You take my love for granted / I just don't understand it

I don't understand it either, Drizzy! You told Rolling Stone she was your "dog for life" and "ultimate fantasy."

Rihanna: I don't know how to talk to you / I just know I found myself getting lost with you / Lately you just make me work too hard for you / Got me on flights overseas, and I still can't get across to you

Is this true, Drake? Not cool. For her part, Rih reportedly told Cosmopolitan in 2011, "I'm open to love. But guys should have to earn it. Because the minute they get it, they want something else." Although it's not confirmed if she was talking about Drake, there are totally parallels here.

Drake: Years go by too fast / I can't keep track / How long did we last? / I feel bad for asking / It can't end like this / We gotta take time with this

Yes, please. Take your time, guys! Given that the two have been on and off for seven years, it's not surprising if they feel like they've gotta take their time.

Drake: And I wanna tell you my intentions / I wanna do the things that I mention / I wanna benefit from the friendship / I wanna get the late night message from you, from you / I put my hands around you / Gotta get a handle on you

It certainly seems like he's not ready to throw in the towel just yet on this love. The two continue to work together, and he sung her praises discussing her work on "Too Good" with Beats 1 Radio by saying, "She got in the studio and just bodied it. It was flawless victory when she sent it back. Everything was perfect... We have a genuine energy between us." I'd say it definitely seems like there's plenty of love between them, despite this song's sad message.

So while neither Drake nor Rihanna have confirmed rumors of a romance, or even that this song is in any way reflective of their real-life relationship, it definitely seems like there's some seriously deep feelings there. The saga of Rih and Drake doesn't seem to be quite over just yet, and depending on your feelings toward them, that's either a good thing or a bad thing. Either way, their collaboration on Views is fire.

More like this
What Is Ariana Grande's Net Worth? When It Comes To Money, She Has No “Problem”
By Hugh McIntyre
You’ve Been Singing “Teenage Dirtbag” Wrong This Whole Time
By Bustle UK
Britney Has Been Granted A Restraining Order Against Her Ex-Husband
By Bustle Staff
Who Is Betty Who Dating? The Australian Singer Is Married To Her Tour Photographer
By Radhika Menon
Get Even More From Bustle — Sign Up For The Newsletter