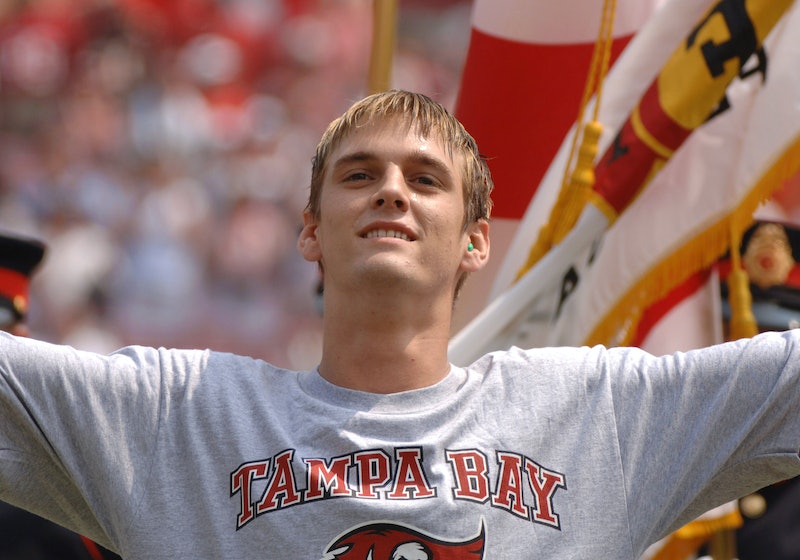 I get it, Aaron Carter. The 2016 presidential race may be one of most important elections in your lifetime — and goodness knows you've already been through a lot in your 28 years. Being the brother of a Backstreet Boy and then never recovering from your romance with Hillary Duff likely weigh heavily on you. No wonder you appear rankled by the political status quo and hungry for change in Washington, D.C. By all means, I'm glad you're not taking your civic duty lightly. But seriously, Carter, what are you doing with Donald Trump?

I'm genuinely curious — not just about why you supported him, but why you go back-and-forth in your feelings about the Donald — a lot?

In February, you declared you were on Team Trump. You want to make American great again almost as much as you want candy, dare I say, maybe even more than you want candy. While it may have disappointed some of us who spent middle school dances awkwardly grooving to "Aaron's Party" the way that only unpopular, cusp-of-puberty girls can (BTW, the song totally still holds up), I accepted that the way you exercise democracy is your choice. You're not too young, you're not too old; you can make your own decisions about Trump. Besides, I can't say I could really picture you feeling the Bern, anyways.

And, you know, good for you for articulating the myriad of ways you split with Trump on various policy points and campaign issues. "I don’t agree with banning gay marriage. It’s outlandish, because he has supported the gay community before. And building a wall is totally outrageous," you told GQ in March. Kudos for explaining the finer points of your political views — and for insisting you're Michael Jackson's chosen torchbearer. Also, I truly relished this exchange with Lauren Larson during that interview:

I read that you’ve been getting some death threats. Do you worry about those?

I’m not scared. I just call them out. I shine the light on cockroaches. And you know what happens?

They scatter. They scatter. Or, they try to stand their ground and it doesn’t work out for them, especially when they have, like, fourteen followers.

Oh, Aaron, you scattered. Days after the GQ interview, it was reported you tweeted you would be backing away from the Donald after being "bullied" (it appears the tweet has since been deleted). When a fan tweeted at you and asked if you still supported Trump, you responded: “I honestly don’t think I will at this point. I’ve been bullied so badly because of it I don’t even want to vote now.”

As a proud defender of democracy, I can't say I'm thrilled hearing about any of my fellow Americans being bullied out of their voting preferences or relinquishing one's civic responsibility (even ones who rely on excessively irritating use of emojis).

But on Friday, you felt compelled to reiterate that you couldn't back Trump — and, no, it wasn't out of fan pressure.

Pray tell, Aaron, what are the "too many reasons" that have turned you away from Trump? His proposed punishment for women seeking illegal abortions (or his backpedaling)? His muddled foreign policy? Perhaps, the clashes at his rallies were just too much for your boyish soul?

Whatever the reasons, I hope you still go to the polls, Aaron. And remember, life is a party — but it's your choice which one you vote for in November.