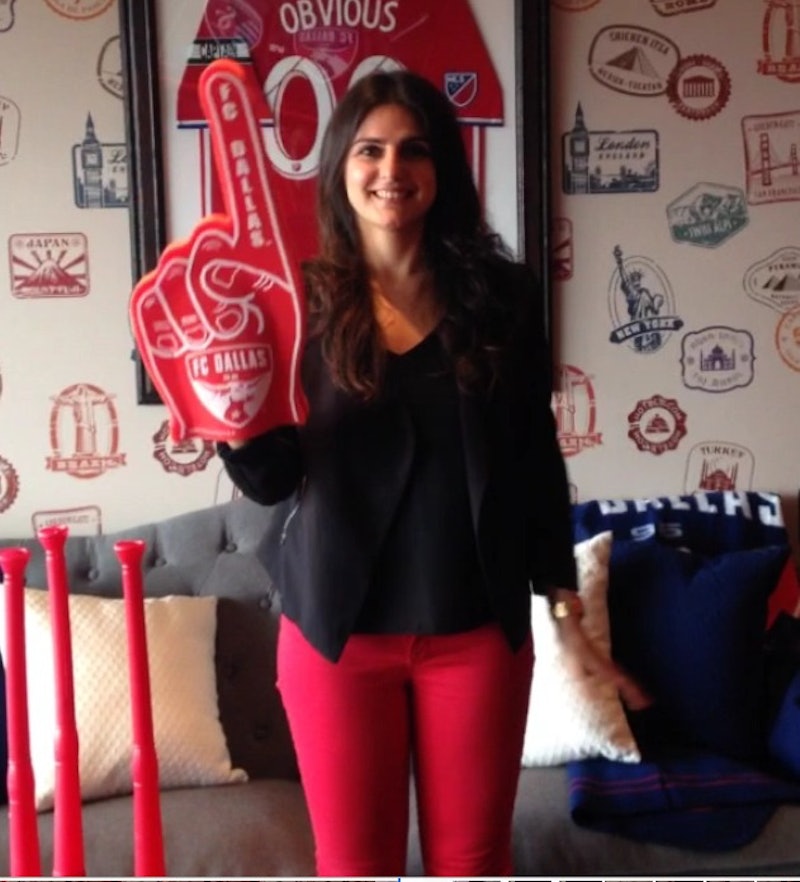 I grew up in New York, went to college in New York, currently live in New York, and probably will never leave New York, so it's safe to say I'm a New Yorker. While I've been to the West Coast and South West and a bunch, and Midwest a few times, I haven't really visited the South. (Unless we're counting that weekend at Bonnaroo in 2006? I don't know if hula hoop contests and silent discos are emblematic of the South, but what the hell do I know?!) So when Hotels.com invited me and a guest to check out their brand new hospitality suite in Dallas, the Captain's Quarters, I said hell yeah, grabbed my intrepid friend Lindsey (also a Texas newb), and flew to Dallas for approximately 24 hours.

Truthfully, Texas has always intimidated me. Sure, it's a massive state and "Everything is bigger in Texas" is probably one of the first things that comes to mind when I think about the state. But also, I felt like everyone from Texas LOVES Texas — more than I've ever loved anything in my whole life. In college, people from Texas would run into each other's arms when they crossed paths, like best friends who hadn't seen in each other in months. It wasn't because they knew each other prior to coming to college in New York though. Once they figured out they were from the same state — not even the same city — at parties or in classes, they developed a strong connection solely based off Texas pride. When I meet someone from New York in another state or country, it's more of an "Oh, that's cool. Have a nice life!" type of conversation. Texas has an undeniable presence even when you're hundreds of miles away.

On the plane ride there, I jotted down all the things that came to mind when I thought about Texas: Over-the-top, polite, accents, cows, Cowboys (the football team and those who ride horses and tend cattle), George Bush, big hats, big hair, big cars, BBQ, sports, and most importantly, Friday Night Lights. And Dallas? Well, I've heard the saying "Keep Dallas pretentious" and saw a few episodes of that reality show about hot, rich singles living in Dallas, Most Eligible Dallas. I quickly started to regret not bringing fancier clothes with me.

So what's the deal? Were the things I thought and heard about Texas true? Was Connie Britton going to greet me at the airport with a big warm hug? Does every guy in Texas look like and act like Coach Taylor? Would I meet a sweet southerner who makes me giggle every time he says "Y'all"?

Well, here's what happens when a New Yorker goes to Texas for 24 hours.

1. You'll Notice All The BIG Stuff

Lindsey and I stayed at the Hyatt Regency in downtown Dallas, which felt like it was the size of a small country. Expansive views, spacious rooms, panoramic elevators, 50 stories — one wrong turn and I'd get lost for sure. But it wasn't just the hotel that was huge. We couldn't help but notice how larger than life everyday things were all over the city: couches, restrooms, restaurant chairs, food portions, drinks, sidewalks. Some things really are bigger in Texas.

But hair? Where was the big hair?! Is that in Houston?

Texas' state motto is "Friendship" and I'd say it's well-deserved. (New York's motto is excelsior aka ever upward, BTW). It was noticeable instantaneously how warm everyone was, and how much they wanted out-of-towners to enjoy Dallas. Because of the rain and 30-minute trip to Frisco for the soccer game, we spent a good amount of time cars. One Uber driver told us to have a #blessed day, another told us to take our time when we were running late, and several went out of their way to drive by the JFK memorial and point out where he was shot.

When we asked one driver about politics and how Dallas generally felt about the election (we were only there for one day, had to get down to biz at some point) it became evident that we didn't agree with him. But unlike the screaming matches I've witnessed at family events between opposing political parties, it was a calm, friendly conversation that ended with us agreeing to disagree and him gifting us a few extra water bottles to take back to the room.

3. You'll Learn That Dressing "Texas" Is Harder Than It Looks

While we left the cowboy boots at home, which I felt like would totally out us as tourists, Lindsey brought along fake eyelashes and huge flower earrings to wear to the game and I brought a never-been-used hair wand to replicate the big Texas hair I envisioned everyone had.

After many failed attempts at our Texas looks, we decided it was time to stop stabbing our eyes and ears and destroying our hair. Ready or not, it was time for some Texas sports.

I knew Texans were crazy about football (Clear eyes, full hearts, can't lose, obvi) because that's basic science, but when I got to Toyota Stadium for FC Dallas' sold-out game against Kanas City, I quickly realized that Texas fandom extended well beyond the Cowboys, Longhorns, and fictional Dillon Panthers.

With the official hashtag of FC Dallas being #DTID aka Dallas 'Til I Die, it's obvious these fans are beyond devoted to their team. So Hotels.com saw an opportunity to make a special suite that rewards the fans. “Our partnership with FC Dallas is the perfect fit for Hotels.com,” said Josh Belkin, Vice President & General Manager, North America for Hotels.com. “With our headquarters in Dallas, we take pride in supporting the Dallas community. We’ve grown as a business significantly since we started as a telephone call center 25 years ago and we are proud to support another growing Dallas team.”

Hotels.com's Captain's Quarters suite is like an indoor playground for fans. After walking into the suite, Lindsey and I quickly made ourselves at home and played in dress-up clothes (Captain Obvious' red jacket and hat), posed for pictures with the life-size cutout of the Captain, and even perfected our juggling skills. Mimicking the Captain's home, the suite is covered in passport-stamp walls and filled with comfy couches, FC Dallas fan toys, and naturally, plenty of selfie opportunities. The team's mascot, Tex Hooper, even stopped by the suite along with one of the players. The Captain's Quarters is unlike other suites in the stadium — it's homey, quirky, and offers a completely unique experience for fans.

The best part is, fans can win tickets to hang out in the suite in a number of ways: They can enter contests on Hotels.com or FC Dallas, take a chance to get upgraded to the suite on game day, or enter contests trivia or a dance-off contests at the game. We watched as one super fan busted a move by the DJ booth and won the dance-off. Moments later he and a friend, who coincidentally won a seat upgrade, were in the suite eating mac and cheese with us.

5. You'll Noticed Everyone Is Married. Everyone!

As two single women who recently deleted all their dating apps for the month, we were ready to meet some sweet southern guys IRL and whip out some of the moves The Professional Wingman taught us. Much to our disappointment, we quickly noticed that the entire city of Dallas is married. In New York, Lindsey and I will often complain about the man deficit, but here the gender ratio was not the issue. We looked around a trendy Mexican restaurant and only saw couples on date night. And when we went to a bar after, we saw more couples on dates — double, triple, quadruple dates even. Lindsey was crushing on one of the players at the game, but a quick Google search showed us that he was married, too. Was that reality show about all the Dallas singles lying to us?

Paula Cole, I feel you. (Actually, Cole's song is a sarcastic look at gender stereotypes that are still alive and well, so now I guess I was double feeling her).

6. You'll Have Trouble Slowing Down

"How are you enjoying your foo—Oh wow! How was it?" A waiter said to us, stunned after realizing we inhaled the lunch he had served a few minutes earlier. We laughed and acknowledged that we were basically competitive eaters. Whether it's because New Yorkers are always on-the-go or are basically being rushed out of restaurants before they even sit down, spending over an hour at a lunch seems foreign to us. Leaving the restaurant, I noticed all the customers who had been there before us were still there.

When I was leaving the soccer game, I quickly noticed the difference in pace too. There was no mad dash to get out of the stadium ASAP, no screaming, no panicking, no hip-checks from strangers trying to get outside one second before you. Leaving the stadium was pleasant — like a stroll in the park.

7. You'll Finally Find A Cowboy Before You Leave...

...but he'll be in the PreCheck line.