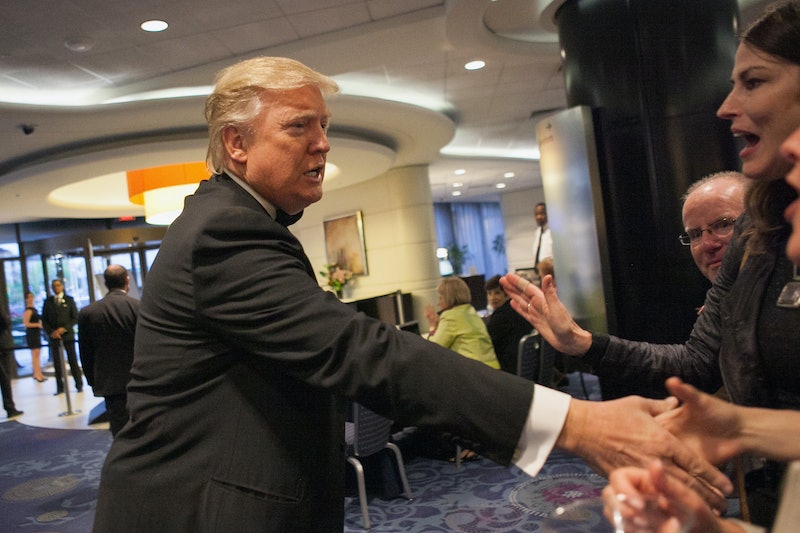 Every year, the White House Correspondents' Dinner delivers some of the most poignant and timely laughs when it brings together an unlikely crowd. The gathering of Hollywood's and Washington, D.C.'s A-listers is known for producing jokes about politicians, the media, and the issues that both groups deal with on a regular basis. This year, the dinner had another topic to focus on thanks to the presidential election — and as expected, Donald Trump jokes stole the show at the White House Correspondents' Dinner .

While Trump was not in attendance for the 2016 event, which took place on Saturday at the Washington Hilton, his two eldest sons, Donald Jr. and Eric, did attend, reportedly as guests of ABC News. Trump's spirit wasn't far away, though, as his campaign antics became some of the most memorable punchlines of the night. It was reminiscent of the last time that Trump made headlines from the WHCD.

In 2011, Trump attended the dinner as a guest of The Washington Post, while President Obama and then-Saturday Night Live star Seth Meyers took turns throwing punchlines his way. Meyers even joked about Trump's then-rumored desire to run for president, saying, "Donald Trump has been saying he will run for president as a Republican — which is surprising, since I just assumed he was running as a joke." By Saturday, the campaign was real, and the jokes were plenty intense.

It didn't take long for Obama to throw some shade Trump's way. He reminisced on his time in office, saying that he wanted to change the tone of politics. Implying Trump, he then added, "In hindsight, I clearly should have been more specific." Trump's tone has dominated the election — and probably not with the effect that Obama would have wanted.

Obama also called Trump out more directly, crediting Trump and his Republican rival Ted Cruz for the recent boost in Obama's approval ratings. "Even my aides can't explain the rising poll numbers — what has changed, nobody can figure it out," Obama joked, as a photo of Trump and Cruz appeared on the screen.

After more jokes targeted at the Republican Party and its wild campaigns, Obama basically went on a much-deserved Trump rant. He feigned like his speech was ending, then said, "Nah, I'm just kidding! You know I've got to talk about Trump!" Clearly, he had come prepared. He even referenced the 2011 event, saying, "I'm a little hurt [Trump's] not here tonight. We had so much fun the last time."

As Obama pointed out, the WHCD is exactly the type of event that you'd expect Trump to attend, particularly during the election year. "You've got a room full of reporters, cameras, celebrities, and he says no," Obama quipped.

Is this dinner too tacky for the Donald? What could he possibly be doing instead? Is he at home, eating a Trump steak? Tweeting out insults to Angela Merkel?

When he concluded his anti-Trump rant, Obama assured the crowd that he could keep going. After all, there's no shortage of shade that a Democratic leader can throw at Trump. Fortunately for the crowd, though, the Trump shade continued with the event's host, Larry Wilmore.

"Your hair is so white, it tried to punch me a Trump rally," Wilmore joked at the president. Okay, maybe that one was more of a zinger directed at Trump supporters, but Wilmore focused on the candidate himself for much of his roast. Wilmore threw shade at everything from Trump's representation in the media, in front of the journalists who put him there no less, to his allegedly small hands.

All in all, the Trump jokes were as expected and well received by the crowd. The Republican Party, in general, took a pretty big hit during the event, as Obama and Wilmore lobbed zingers at Reince Priebus, Sen. Mitch McConnell, and the Republican candidates. But it's anybody's guess what could happen at next year's event if Trump really does make it to the White House.