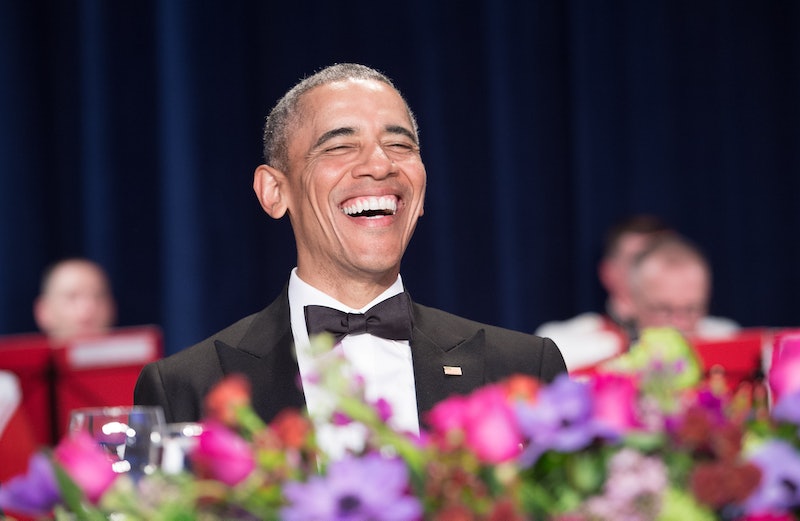 Throughout his eight years in office, President Obama has been known as one of the most lively, relatable presidents in office. If there were ever an event to make that more clear, it was Saturday's White House Correspondents' Dinner, the last one that he would attend as a president. The president brought the house down as usual, but it was Obama's joke about Reince Priebus, chairman of the Republican National Committee (RNC), and the Republican Party in general that really made the night.

Obama launched his scathing jokes on the Republican Party by alluding to the two leading Republican presidential candidates, outspoken businessman Donald Trump and Texas Sen. Ted Cruz. He pretty bluntly credited the Trump and Cruz with Obama's recent boost in approval ratings. "Even my aides can't explain the rising poll numbers — what has changed, nobody can figure it out," the president said, while photos of Trump and Cruz appeared on the screen.

Then, Obama turned his attention to Priebus, who was in attendance at the Washington, D.C. Hilton hotel on Saturday. As the leader of the RNC, Priebus has largely remained the face of the GOP establishment throughout the campaign season. "Congratulations on all your success," Obama said sarcastically to Priebus. "Keep it up."

For his part, Priebus seemed to take the joke well from the audience. He was seen laughing at his table, as were the Republican members of Congress who were in the audience. Their reaction seems to prove that truly, nobody is taking the Republican race for the White House seriously.

In all seriousness, though, Obama's jokes on Saturday night represented an eight-year run as the leader of the free world. He has accomplished a lot in that relatively short amount of time (although long for a president), but along the way, Republicans have worked tirelessly to stop him. In fact, that's another thing Obama joked about, saying that Republican members of Congress have stopped taking his calls now that he's almost out of office — which is probably true for the most part.

Obama's joke toward Priebus struck the right balance between funny and brutally honest. Is the Republican Party's mess all Priebus' fault? Probably not, but it certainly wasn't the first time that a political leader was blamed for things beyond his control. On the night of his last WHCD as president, though, Obama definitely got to have the last laugh. Let's hope the GOP's mess remains a punchline and not a hard truth come November.