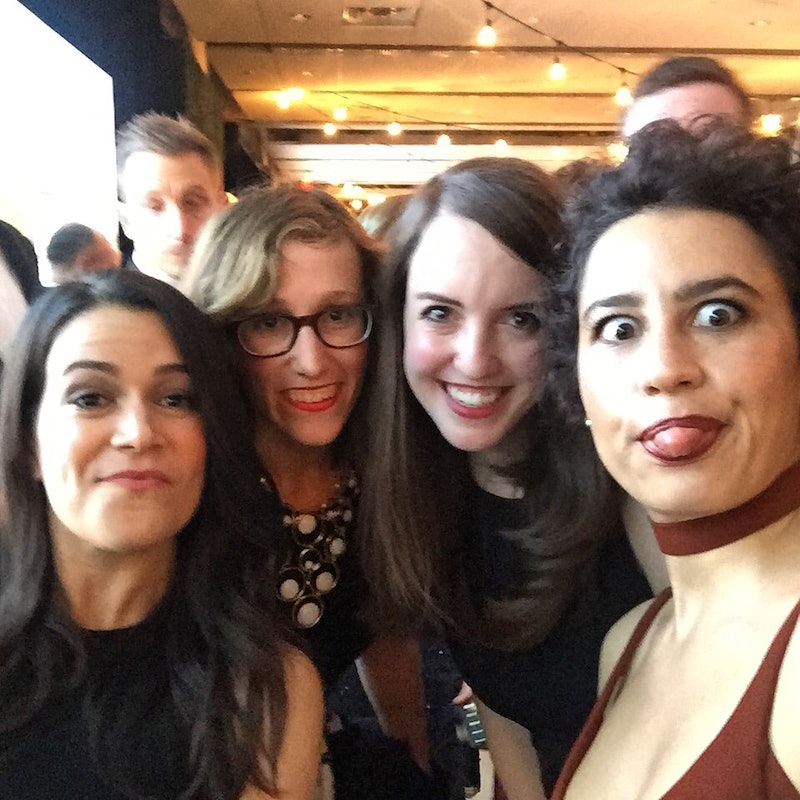 Sometimes you're the life of the party, and sometimes you're the awkward girl trying to stuff as many cheese cubes into your very small clutch as humanly possible before someone catches on to the fact that you are not a celebrity, you are not a politician, and yet, you're still parading around a White House Correspondents' Dinner pre-party like you belong — which you do, because you were invited, but only kind of. That was me as I arrived as a plus-one to the Yahoo! News and ABC News WHCD cocktail reception. I tried hard not to trip on the lace hem of my rented black floor-length gown as I scoped out people I vaguely recognized from television and Twitter rubbing elbows behind the scenes at the White Correspondents' Dinner, and snapped photos of everything and everyone before they trickled into one massive, glittery, A-List single file line to enter the actual White House Correspondents' Dinner, which, for the record, I was not invited to. Nerd prom, as they call it, was underway, and for some reason, I was there to see it go down.

As it turns out, there are some perks to being a nobody at a high profile celebrity event. For one thing, no one really talks to you, which is amazing if you're an introverted wallflower, just looking to have a good time from the safety of your ballroom corner. But, if you do want to snap a pic of a celeb, it's not only completely acceptable, but also encouraged to politely approach someone with your smartphone flipped in selfie mode, gush about how much you love their work, and give the night some Instagram publicity, so long as you use the proper hashtag.

So that's exactly what I did. The night was bound to be memorable for any number of reasons. For one thing, it's President Obama's last Correspondents' Dinner as commander-in-chief, meaning people are going to get a little sentimental. For another, it's an election season, meaning the time has never been more ripe to throw in a few well-timed "it's gonna be huge" jokes. At any rate, it was an evening worth documenting, and documenting well — with selfies, more selfies, and stealthy photos where you're pretending to take a selfie, but really you're trying to snap a pic of Tony Goldwyn chatting casually with Kerry Washington, because OMG your heart is going to explode, no TV couple will ever be more perfect, or more forbidden.

Somewhere, in a neighboring ballroom, Kendall Jenner was allegedly waltzing around in a black, floor-length gown of her own (one she probably didn't rent, but who knows?), and I can only imagine she was taking selfies too since that is the Jenner way, and also the Millennial way — and really we were both only giving our audiences what they want, only her audience clocks in around 17 million Twitter followers, and mine clocks in around... well, I don't want to tell you.

Ever wonder what goes down behind the scenes of the White House Correspondents' Dinner? Forget what you see on C-SPAN — the real party begins two hours before. Here are the types of photos you take when you're suddenly flung into a party filled with famous people.

1. You make a beeline for the most important person in the room — the president

I suppose some people who find themselves in this situation might say something like, "Excuse me, love your show — can I snap a photo?" But when I saw an opening in the crowd of admirers buzzing around Tony Goldwyn, aka President Fitzgerald Grant on Scandal, aka the one man whose moody on-screen persona is what I envision when I describe "my type," I didn't have time for such platitudes. Instead, I ran up to him with my selfie arm already outstretched, watched his eyebrows (which always seem slightly in danger of disappearing anyway) inch up his forehead in surprise, and took this photo. And then, three more women immediately followed my lead, and I didn't have time to even process what just happened, because I had just witnessed Kerry Washington walk by with her hair perfectly piled on top of her head, and if I didn't Snapchat it immediately, I was worried my heart might stop. That's an important thing you learn, at these types of events. It's in your best interest to have a short attention span.

2. You take photos of other people while pretending you're taking photos of yourself

Sometimes, I try the reverse of this move when I want to take a selfie, but don't want anyone to notice. A person who was unknowingly standing on the hem of my dress, thereby effectively trapping me in my spot, was telling someone he heard they were limiting who could take photos of the Scandal cast, and I'm not sure if that was true, but because I wasn't moving until the person holding the bottom of my dress hostage moved (and he wasn't going anywhere, thanks to a plate of spring rolls that had just appeared out of nowhere), I decided to use this moment of being stuck to pull a face, point my phone at Washington, and get the photo I felt the moment called for.

3. See if there are any other cast members from a popular primetime drama you may have missed

Where there's one, there are bound to be others. In this case, Guillermo Díaz was standing to my left, and after staring him down from the corner of my eye for 10 seconds, which felt like 10 minutes, he decided to begrudgingly return my eye contact. I used this as an invitation to ask him a very important journalism question that is often presented at celebrity events like this: "Who are you wearing?" "Ted Baker," he said without skipping a beat, which is just proof that these A-listers are nothing if not well trained.

4. You go for the #foodporn shot

For me in this case (and really, in all cases), that was a plate full of cheese that no one was touching, because why would you when there are apparently spring rolls?

5. You look around for your best friends

Sometimes, it just helps to see a friendly face — or better yet, two friendly faces. When I saw Broad City's Abbi Jacobson and Ilana Glazer taking photos at a party next door, I let out a sigh of relief. Finally, someone I know. To be fair, I've never met these two funny ladies ever before in my life, but isn't it really just a testament to their talent that they've convinced me we're longtime BFFs?

6. You look to see what everyone is wearing

7. You do a spin around the room to see if you missed any dreamboats

And then, when you see Scott Foley staring intently at a person who isn't you, you pretend it is you, snap a pic, and wonder if your heart rate will ever return to normal.

8. You see if you can sneak into the actual dinner itself

You figure if you're casually standing next to Connie Britton no big deal as she makes her way into the main ballroom, they're bound to let you in with her. And when that doesn't work, you take a pic and move on.

9. You wish you had your mom

OK, so I don't know if that's actually Marissa Mayer's mom, but that beautiful woman standing next to her is the spitting image, and it made me wonder what my mom was doing, and what she would say if she knew I had just spent the last two hours eating celebrities' picked over cheese cubes, loving every second of it.

More like this
What Is Barack Obama’s Net Worth? He Makes *Way* More Now As An Ex-President
By Hugh McIntyre
15 Ways To Tell Someone Was Just Talking Behind Your Back
By Carolyn Steber
Kevin Kreider Finally Asked Out Kim Lee On 'Bling Empire'
By Brad Witter
Kelly Osbourne Found Love In Her Best Friend & Now They're Expecting
By Vivian Iroanya and Rachel Mantock
Get Even More From Bustle — Sign Up For The Newsletter