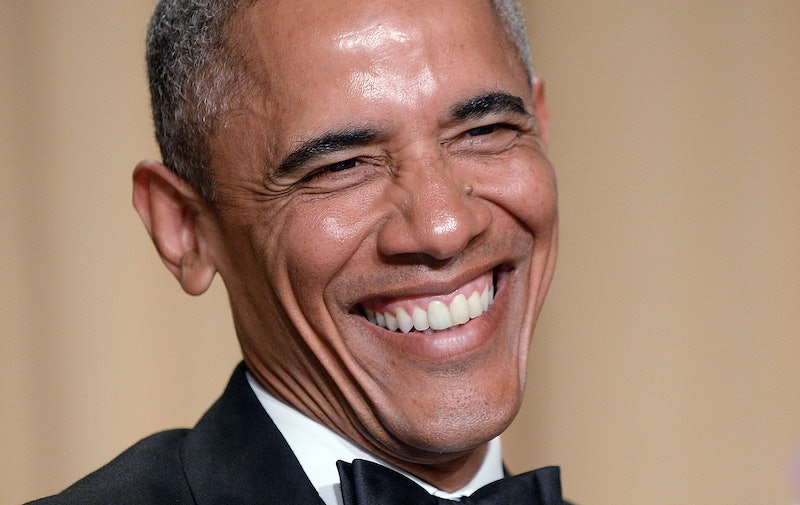 President Obama did not hold back while weighing in on some recent gaffes of his potential replacement during his comments at Saturday night's White House Correspondent's Dinner — especially when POTUS took a shot at the much-discussed "CPT" joke made by Bill De Blasio and Hillary Clinton earlier this year. "I know I was a little late tonight," Obama began. "I was running on 'CPT' — which stands for 'Jokes That White People Should Not Make,'" he smiles and we all know he's calling back to that awkward, cringe-worthy moment from De Blasio and Clinton at the Inner Circle Dinner in early April where they tried to change the initialism that refers to "colored people time" — an inside joke among members of the black community about always being late — to "cautious politician time."

Although De Blasio said that people were "missing the point" of his joke, it was clumsy and terrible in the way most politician-driven skits are — save for jokes made by President Obama, and they're sorely going to be missed after this year. But it also touched on a blind moment of privilege on the parts of Clinton and De Blasio. Facts are, as POTUS said, there are some jokes that just can't be made by someone coming from a place of privilege. Regardless of the desire to seem edgy, words matter.

Obama certainly didn't hold back from ribbing his fellow Democrats — whether it was Bernie Sanders (who was sitting a couple feet away), or Clinton (who wasn't) — along with the Republican hopefuls. Between comments about bringing his best material from the night to Goldman Sachs speeches, translating large sums of money into grassroots donations for Sanders or calling out Donald Trump's Twitter habits, his absolutely #Savage approach to his final hurrah is absolutely deserving of his mic drop moment.

More like this
What Is Barack Obama’s Net Worth? He Makes *Way* More Now As An Ex-President
By Hugh McIntyre
The Best Memes & Tweets From The 2022 Met Gala
By Olivia Rose Ferreiro
8 TikTok Pasta Recipes To Try Out At Home
By Emma Garza
Prince Harry Spoke Out About Archie & Lilibet’s Futures And What Worries Him The Most
By Sam Ramsden
Get Even More From Bustle — Sign Up For The Newsletter