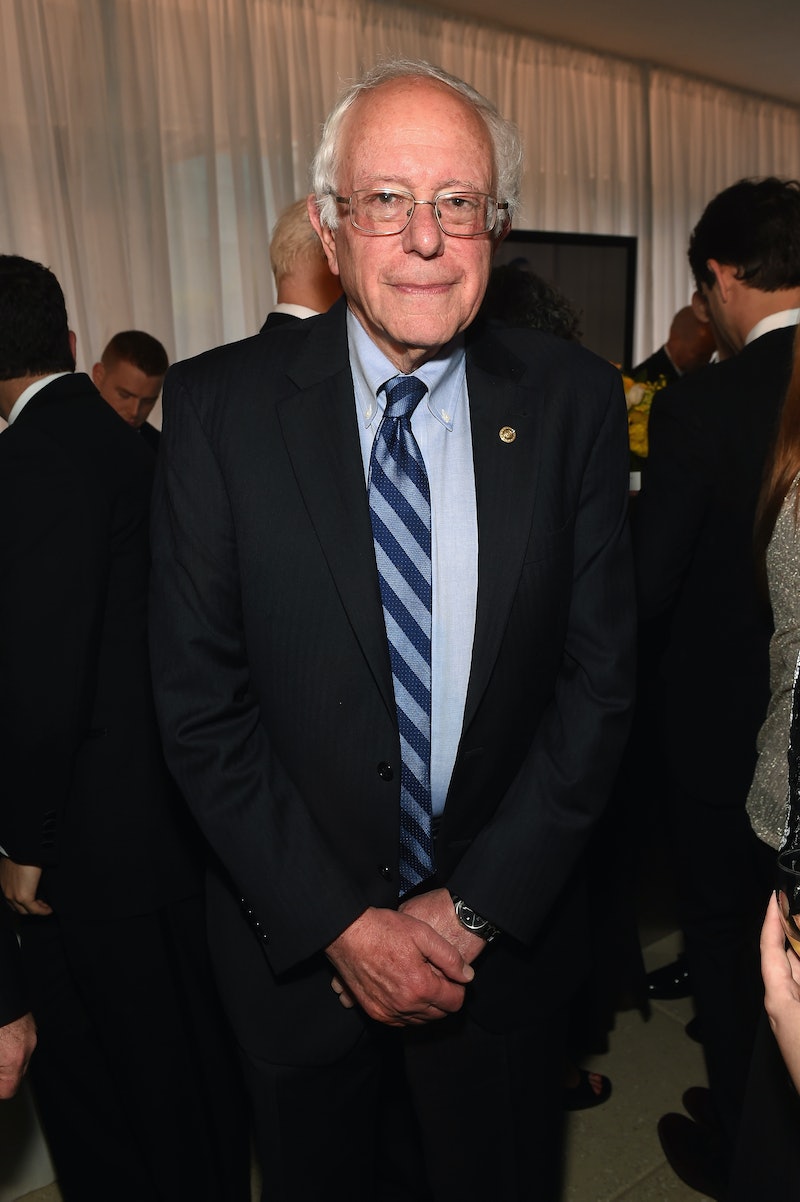 In an election year, it only makes sense that the candidates vying to be their party's nominees would snag at least a little bit of the spotlight at most major political events — and the annual White House Correspondents' Association (WHCA) dinner (also known as "Nerd Prom") is no different. Even though the number of presidential hopefuls arriving at the event in-person is sort of slim this year, you may be wondering: Is Bernie Sanders at the White House Correspondents' Dinner?

Don't go adjusting your screens, Bern-feelers, your eyes aren't deceiving you: The White House Correspondents' Dinner is totally feeling the Bern too — with Sanders (tux or not) as the only presidential hopeful to make an appearance at tonight's event. While both parties front-runners — Donald Trump and Hillary Clinton — will not be attending, Sanders arrived in style (regardless of what the haters say).

Because all guests need to score an invitation from a news outlet to gain access to the festivities, Sanders' invite came courtesy of CBS News. He'll be dining in the company of their other guests that include titans of film, music, and politics: Morgan Freeman, Aretha Franklin, Defense Secretary Ash Carter, and White House Senior Advisor Valerie Jarrett. So just try not to swoon while imagining the small talk at that table.

Sanders' appearance is sure to delight his passionate fan-base who might be in need of a pick-me-up after a recent string of less-than-successful primary nights. In fact, it seems that he was one of the most popular guests at CBS' pre-party with tons of attendees clamoring to take selfies with the Vermont senator.

Among Sanders' admirers of the night are The Nightly Show contributor Grace Parra, who tweeted that the senator was the "belle of the ball" already, and U.S. woman's soccer team goalie Hope Solo — both managed to snag super cute pictures early on in the night. Other high profile Sanders supporters like Rosario Dawson and Mark Ruffalo will also be attending as guests of USA Today and The Boston Globe, respectively.

Meanwhile, some critics on Twitter noted that the White House Correspondents Dinner is arguably a pretty strange place to see the noted anti-establishment politician — due to the amount of Washington and media insiders and, of course, celebrities in attendance. After all, Sanders has been highly critical of fundraisers by the Clinton campaign, that he called "obscene" for the hefty amounts of money brought in to the campaigns via celebrity power.