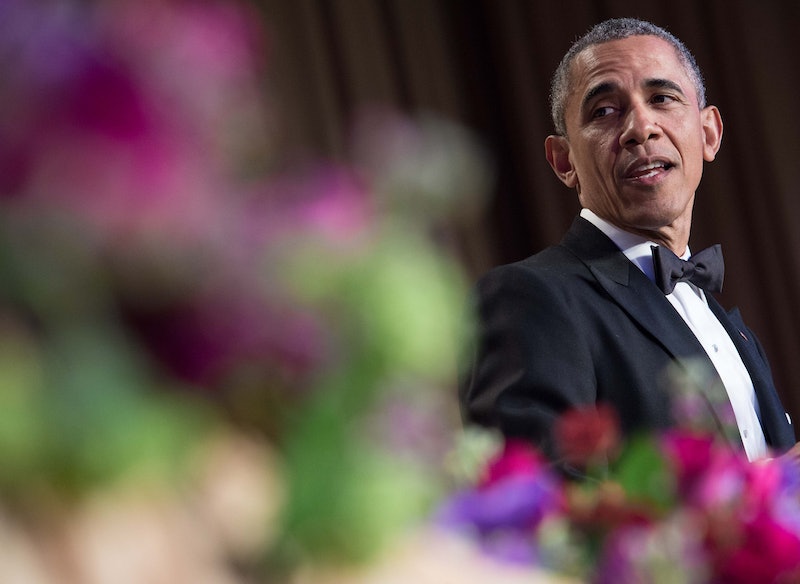 In his speech at the White House correspondent's dinner, the president made a joke regarding the 2016 presidential election that had everyone wondering if he was back peddling on his promise to refrain from endorsing a candidate in the Democratic primary. In acknowledging his final year addressing the press as president at Washington's "Nerd Prom," Obama hinted it'll be a woman onstage next year. Was he referencing who I think he was?

"Next year this time someone else will be standing here in this very spot, and it's anyone's guess who she will be," Obama said nonchalantly. Democratic presidential candidate Hillary Clinton is currently the only woman currently still on the ballot in the 2016 primary, and I think it's safe to say the president is an informed man. But was his quip meant as a thinly veiled endorsement or just a joke?

Anticipation around President Obama's final White House Correspondents' Dinner had been building for weeks, and the president didn't disappoint. He tossed out zingers aimed at everyone from his own wife, First Lady Michelle Obama, and Republican National Chairman Reince Priebus to the Senate's inactivity and Sen. Bernie Sanders. Only the wondrous Helen Mirren appeared to escape unscathed.

Although absent from the evening's soiree, Democratic frontrunner Clinton was hardly forgotten. Obama opened the night with a few jokes aimed directly at his former secretary of state before referencing her as the next president of the United States.

The White House announced President Obama would refrain from endorsing a candidate in this year's Democratic primary back in January with White House Chief of Staff Denis McDonough telling NBC's Meet the Press, "that's not our job." It's a position both he and Vice President Joe Biden have maintained throughout their party's nomination race.

Given the tongue-in-cheek nature of the White House correspondent's dinner and Obama's reputation for well-crafted humor it can be argued he was merely looking to raise a few eyebrows in his final roast of Washington. But, when it comes to Clinton, the president has been walking a fine line between compliment and endorsement for nearly a year now. The day before Clinton announced her candidacy in April 2015, Obama told reporters in Panama he thought she "would be an excellent president."

So, was Obama finally offering up an endorsement? It's anyone's guess.