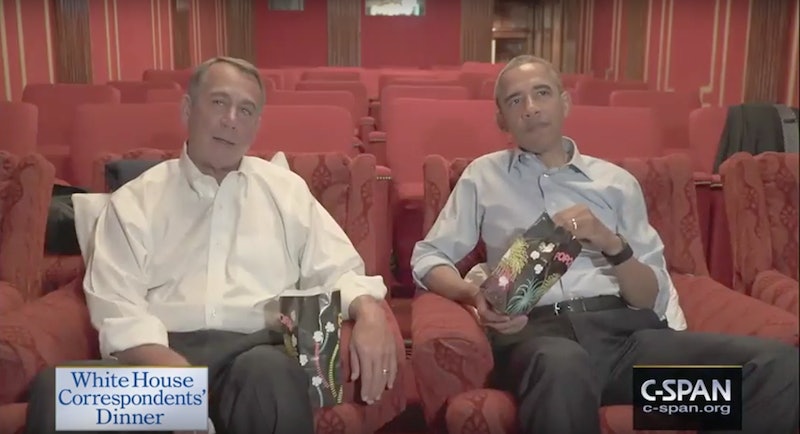 Retirement seems to have changed the former speaker of the House of Representatives. In a video cameo during President Barack Obama's White House correspondents' dinner speech, John Boehner showed America a different side of himself while giving the president a little advice on how to spend his post-White House years. Drinking before noon, indulging in junk food, aviator shades? What's happened to Washington's former most formidable Republican?

In between zingers at Saturday's White House correspondents' dinner in Washington, D.C., President Barack Obama pondered what life on the other side of the White House fence might look like. The Obamas' decision to remain in D.C. following his second term to allow his youngest daughter Sasha to finish school has presented "a bit of a dilemma," the president said. "Traditionally presidents don't stick around after they're done and it's something I've been brooding about a little bit," Obama said as a means of introducing a mid-speech video that poked fun at some of the president's closest allies and foes.

"I know who I need to talk to," the president admits after a few failed attempts to find ways to occupy his time. Enter Boehner wiping away a few tears while munching on popcorn and watching Toy Story with President Obama.

"Now you want my advice?" Boehner asked incredulously. Boehner's first order of business for his former sparring partner? "Stop sending me all these LinkedIn requests." But Boehner's best advice is "just be you for awhile." "Yesterday, I had a beer at 11:30 in the morning and you know McDonald's now serves breakfast all day long," he bragged, lest anyone think he can't lead by example.

The two, whose tense relationship appeared plagued by disagreement in the years leading up to Boehner's resignation in the fall of 2015, swagger out of the White House movie theater wearing identical aviator sunglasses (likely swiped from Vice President Joe Biden's office). Boehner certainly had an intimidating air about him while Congress argued the government into a shutdown in 2013, but he never particularly struck me as cool, until now.

The feeling doesn't last long, however, as the next words out of Boehner's mouth are "zip-a-dee-doo-dah, zip-a-dee-ay," which you may recall as song lyrics from a Disney movie (albeit a rather controversial one). Boehner also pressures Obama to smoke cigarettes in a jab at how oversensitive the former Speaker of the House was about answering questions regarding his smoking habit.

Boehner's cameo serves as a perfect highlight reel to some of his and Obama's best moments during the president's two terms. The references, both the subtle ones (his tears) and those that are more direct (he hints at finally securing that "grand bargain — on a sweet Chevy Tahoe!"), are comedy gold.