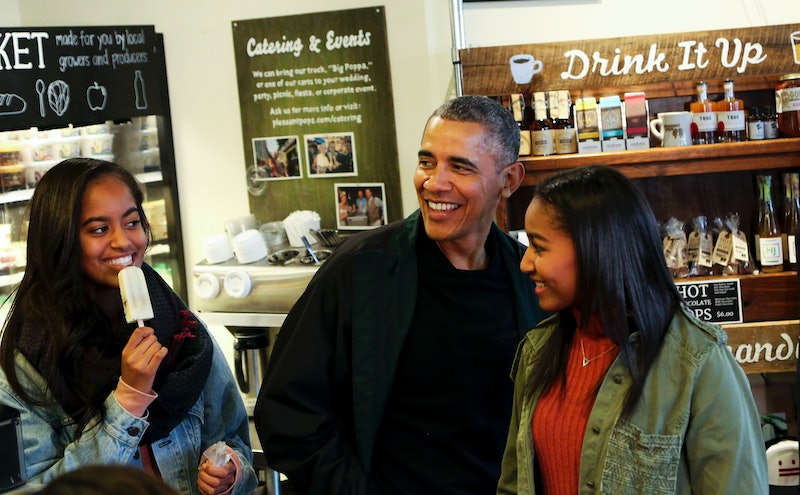 Three years of media speculation came to an end Thursday when the president accidentally let the cat out of the bag. While having lunch in Milwaukee, President Barack Obama said his family would remain in Washington for a few years after his presidency ends to allow his youngest daughter to finish high school.

"We're going to have to stay a couple of years so Sasha can finish," the president said when asked by one of his lunch companions where he and the First Family would relocate to following the end of his second presidential term, according to the Hill. "Transferring someone in the middle of high school — tough."

Sasha, who was 8 years old when her father first took office in 2009, will be a sophomore at Sidwell Friends School when Obama leaves office in January 2017. Her older sister, Malia, however, will already be off at college by the time the president's second term ends.

Speculation about the Obamas' post-White House plans has run rampant ever since the president first hinted at a local move in an interview with ABC News' Barbara Walters back in 2013. "We gotta make sure that she's doin' well ... until she goes off to college," the president said. "Sasha will have a big say in where we are."

In the interview, Obama acknowledged both of his daughters have had to make serious sacrifices for his high-profile career and hinted he felt tearing a teenager away from her friends in the middle of high school might be a little much. "Obviously they — and Michelle — have made a lot of sacrifices on behalf of my cockamamie ideas, the running for office and things," he told Walters.

Should the First Family follow through with a White-House-to-Washington move, Obama will become the second president in U.S. history to maintain a Washington, D.C. address following his time at 1600 Pennsylvania Avenue. Woodrow Willson was the first (and so far, only) president to stay within Washington after his presidency.

But Wilson's decision wasn't based on his children's best interests. Wilson remained living in Washington after his second presidential term ended in 1921 because he had been made partially paralyzed by a stroke he suffered while still in office in October 1919.

However, the Obamas are not likely to remain with a Washington address indefinitely. The president has, on more than one occasion, often told people, "it is good to be out of Washington," hinting that he's never truly felt at home in the politically-charged hub, the Washington Post reported. But while the president let it slip he and Michelle had definitely decided to stay put for Sasha's sake, he was less forthcoming about details beyond that, telling his Milwaukee lunch dates, "We haven't figured that out yet." Many believe the Obamas have outgrown Chicago, the city they met and married in, and will instead look to put down permanent roots in New York or California after Sasha's graduation.

Although it might still be unclear exactly which state the Obamas will choose to permanently call home post-White House, one thing is certain: Obama remains a dedicated dad. His decision to honor the needs and wants of his daughter during his own transitional time show he's clearly already focused on his next major role.