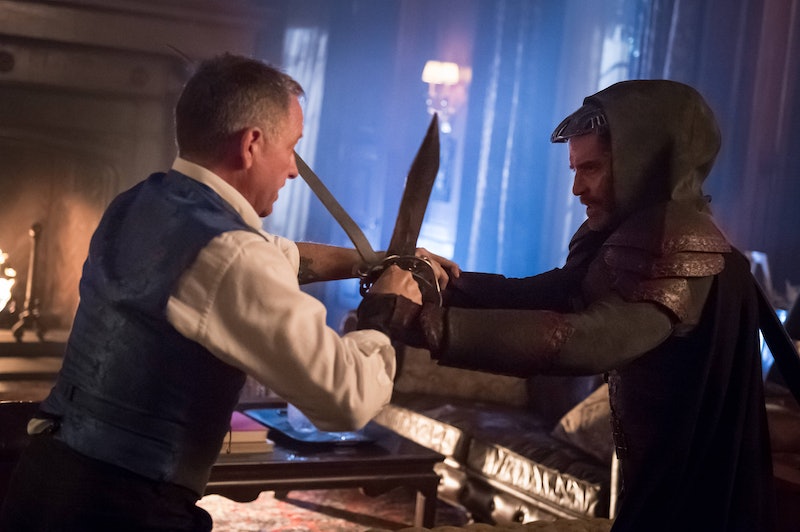 A villain returns from the dead on Gotham this Monday, though you might be better off forgetting the Theo Galavan you once knew. Dr. Hugo Strange's Patient 44 got a name at the end of last week's "Pinewood." The most recent beneficiary of Strange's reanimation experiments broke out of his stasis early with deadly results for a few members of the staff. It seems that Strange successfully brought Theo Galavan back from the dead, but that's not the name the man yelled as he reasserted himself into the land of the living. Theo Galavan called himself Azrael, and that's a name with an ancient history and a lot of meaning.

Azrael has religious connotations in several traditions, though the word itself is Hebrew, where it translates to "God's help." What kind of help, you may ask? According to the Jewish Encyclopedia, Azrael is often referred to as the Angel Of Death — God's emissary to bring mortals to the other side. (Suddenly Theo's new nickname feels very appropriate for a comic villain.) Some theological depictions of Azrael place him in the "Third Heaven;" according to Christian Apologetics & Research Ministries, that's where God himself dwells. The name Azrael doesn't appear in the Bible or the Quran, but has become linked to the transition from life to afterlife through other texts and oral traditions.

Gotham's Azrael looks just like pre-death Theo Galavan, plus some armor, a hooded cloak, and a sword. This contradicts the physical description of the archangel Azrael in the 1906 Jewish Encyclopedia, where he's sporting 7,000 feet; 4,000 wings; and the same amount of eyes and tongues as there are humans on the Earth. That would have been a challenge for Gotham's wardrobe and make-up department.

The name Azrael has a history in pop culture that cashes in on its religious significance. Jason Lee's character in Kevin Smith's 1999 apocalypse comedy Dogma is called Azrael; he's the demon who eggs Matt Damon and Ben Affleck's banished angels to do some smiting to get back into God's good graces. On the HBO rapture drama The Leftovers, the Angel Of Death may have come to Earth through the conduit of Nora Durst.

And in my personal favorite use of that name in film and television history, the Smurfs' wizard nemesis Gargamel is often assisted in his Smurf-napping plans by his cat, Azrael. There's something very '80s about naming a cartoon kitten after such a dark figure.

As you may have guessed, Azrael is a part of the DC comics tradition too. The name isn't being introduced to the Batman mythology by Gotham. Two men have taken up the Azrael mantle in the books: Jean-Paul Valley and Michael Lane. Both are charged with exacting the will of the Order Of St. Dumas (and there's the Galavan connection!) by operating as the secret society's own Angels Of Death. "I have come to kill you," the man formerly known as Galavan says in the promo for Monday's episode. And it's not clear who he's speaking to, but he talks as though he's been sent to do that errand rather than deciding on it on his own.

The Order Of St. Dumas isn't done with Gotham yet, and this resurrected foot soldier could advance their plans significantly.