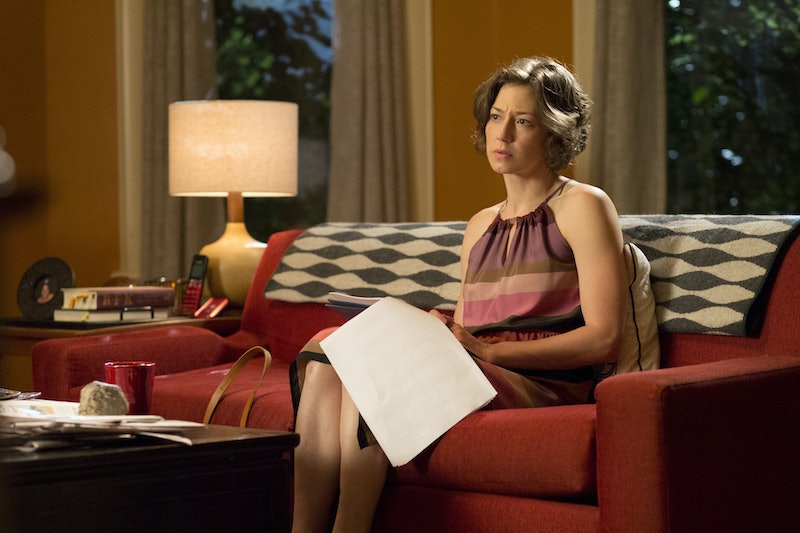 What's the difference between coincidence and correlation? This question cropped up during Season 1 of HBO's The Leftovers in the tragic figure of Nora Durst, who is infamous for having her entire family — father, son, and daughter — disappear during the Sudden Departure. This question became even more prevalent in Season 2 with the introduction of Miracle, TX, which suffered zero departures on Oct. 14. Are these things merely statistical anomalies? Or is there something about Nora and Miracle that make them special? This Sunday's episode, offered a possible explanation: The Durst family's disappearance wasn't a coincidence at all, because Nora is a "lens."

What is a lens? (Other than the title of the episode, of course.) As we learned over the course of the hour, according to some scientists a lens is a person who, for whatever reason, amplifies the chances of Departures among those close to them. Nora has come to the attention of these scientists since, not only did her three immediate family members all disappear during the Sudden Departure, but then on the same day that she moved to Jarden, the girl who lived next door to her new home inexplicably vanished into thin air. Again: Coincidence? Or correlation?

Nora has to know the answer; it's what drives her actions for the whole episode. She has to know whether she is directly responsible for her husband and children "lifting" (a new term that's coined this week for what happened to the Departed on Oct. 14). She speaks both to a scientist doing research into the subject and to a fellow employee of the Department of Sudden Departures, which has adopted the "lens" theory into its investigatory questionnaires.

That DSD representative is in town trying to determine whether or not Evie Murphy's disappearance was a true Departure. While a fundraiser for the search efforts, Nora manages to steal the questionnaire from the man's briefcase — ostensibly to help Erika, but really to get to the bottom of her own personal mystery. By the end of the episode, Nora has come to a devastating conclusion: If she really is a "lens," then her family may have lifted because, at the moment of the Sudden Departure, she was actively wishing that they would disappear.

A person who is a lens supposedly acts as a magnifying glass, intensely focusing the effects of the Sudden Departure on those in close proximity to them, like sunlight on an ant. There is contention as to how this works, whether through a scientific explanation like "ultraviolet rays" (as the DSD worker suggests) or through something more... supernatural. The scientist Nora speaks to on the phone insists that Nora is a conduit for the demon Azrael, known in Hebrew, Islamic, and Sikh traditions as the Archangel of Death. Nora rightfully scoffs at this notion — although there's at least one clue that this explanation perhaps isn't as absurd as it first appears.

In the 1907 work Folk-lore Of The Holy Land: Moslem, Christian, and Jewish by J.E. Hanauer (a cleric at St. George's Cathedral in Jerusalem), a parable tells of a man addicted to gambling who makes a deal with Jesus to keep Azrael at bay. The story ends with the man being refused entry into Heaven and taken down to Hell where, after beating Satan at cards, he is given the opportunity to repent to Jesus and finally allowed into Heaven. What does this have to do with Nora Durst and lenses? Maybe nothing. But, the story does bear some striking similarities to her brother, Matt Jamison — who we saw gamble with his fortune in Season 1, and then be denied entry into Miracle in Season 2, after which he descended into the hellish camp on the town's outskirts to seek repentance.

Coincidence or correlation? You decide. But, before you go dismissing the scientist's demon theory as quickly as Nora, remember that showrunner Damon Lindelof is the same man who ended Lost as a battle between a white-clad God-like figure and a black-clad Satan-like figure. Is Nora acting as the earthbound instrument of the Archangel of Death really that big of a stretch?