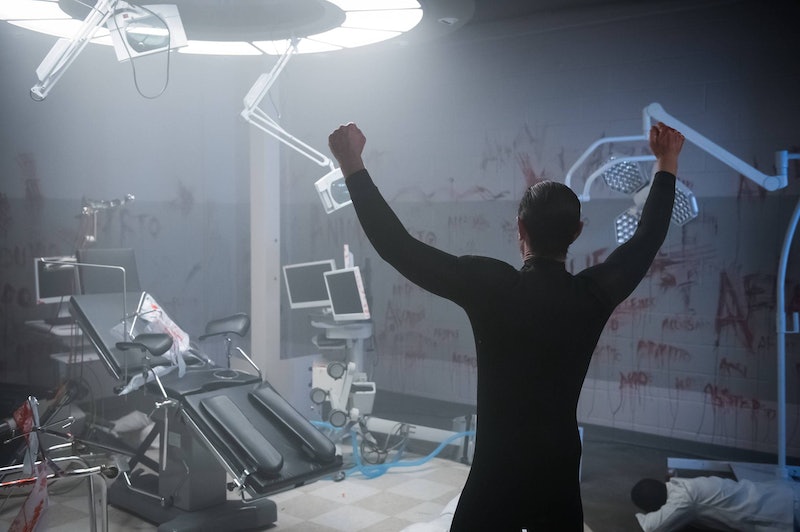 Theo Galavan just returned from the dead, resurrected by Hugo Strange, the mad scientist behind the creation of almost all of the supervillains in Gotham City. But while the end of the April 18 episode showed Galavan screaming the name "Azrael," it was actually just a part of his mental breakdown, which scrambled his memories and religious zealotry. Using some complicated (and probably not 100 percent sound) psychotherapy, Strange hypnotizes Galavan into believing he's Azrael, and no longer the descendant of a wealthy Gotham City family, brother of Tabitha, and former mayor, but actually a piece of The Order of St. Dumas' mythology. So now, Galavan believes that he is Azrael and that his mission is to kill Jim Gordon.

Strange goes back to the text to give Galavan/Azrael the tools associated with the warrior from the Order of the St. Dumas lore: a sword and armor that should protect Azrael and give him supernatural powers. Of course, the former Galavan heir actually has powers from the methods Strange used to resurrect him, but the GCPD struggles to land any hits on the super-quick, super-strong, and super-psychotic Azrael. Plagued by visions of his past life and an angry determination to kill Jim, he rampages through the city and kills many cops, possibly including Captain Barnes — that chest wound looked serious. If Captain Barnes doesn't survive the attack, that's a dramatic change for the Gotham Police, and they're going to need former Detective Jim Gordon back. That's right, Jim, you'll have to wait before going off and finding Lee.

But so far, Azrael hasn't been able to succeed in his mission to kill Jim. Instead, Azrael has fallen back, observing and stalking Jim from a distance. I guess the story will continue in the next episode, titled "Unleashed," which sounds like it will feature some all-out action from the unhinged Azrael.

However, there's one possible wrinkle — what if Azrael remembers that he used to be Theo Galavan? When he came across a poster for his mayoral campaign, he suffered flashbacks, so there's a chance that he might have remembered his former identity.

And his attacks were just broadcast on TV, so Tabitha, Galavan's sister, could be hunting him down in order to reunite and resume their plans to take over Gotham City and kill Bruce Wayne. Dr. Strange suggested that finding out that he'd died and been resurrected could drive Galavan back into madness. But at the same time, he'd also probably support killing Bruce Wayne, because the young billionaire just discovered that Strange was responsible for killing his parents, and only needs proof to put Strange away. Taking down Azrael, Strange's most ambitious creation, could certainly help Bruce get Strange behind bars.

Whether it's through Jim Gordon, Bruce Wayne, or confronting Galavan's past, both Azrael and Hugo Strange are heading for a major fall when Gotham Season 2 comes to an end.

More like this
What Does Doctor Strange’s Third Eye Mean?
By Arya Roshanian
Marvel's 'She-Hulk' Trailer Is Finally Here & The Hulk Lends A Big Helping Hand
By Grace Wehniainen
Everything To Know About Marvel's 'Echo' Series On Disney+
By Grace Wehniainen
'Bridgerton' Star Nicola Coughlan Confirms Season 3 Will Focus On Colin & Penelope
By Grace Wehniainen and Alyssa Lapid
Get Even More From Bustle — Sign Up For The Newsletter