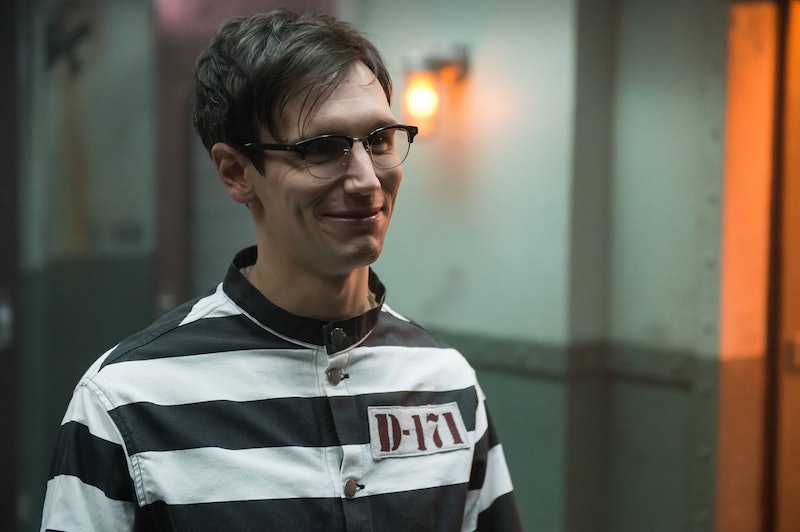 Almost every single character on Gotham has done a stint in prison or Arkham Asylum this season, and while they all wound up escaping or being set free, I think that Edward Nygma, future/current Riddler, could wind up being the most important. Ed discovered Hugo Strange's Project Chimera experiments in the last few moments of "Azrael," one of the second season's final episodes. And given that no one else knows what he's discovered, he could wind up being the key to the entire season. If Dr. Hugo Strange is brought down and his experiments revealed, it could all be because Ed is the one who brings that evidence to light — and maybe even sets the superhumans free from their secret prison cells.

Becuase Ed certainly deserves punishment for murdering Kristen Kringle in Season 1, I was surprised to see how much of an asset he became for the GCPD. He befriended all of the other inmates, quickly analyzing their personality traits, figuring out their psychological issues, and figuring out how to organize them into his own personal task force, with just a little positive reinforcement. He also used his position to spy on Hugo Strange, figuring out that Jim Gordon was their next target, and discovering where the secret experiments were being secretly housed with only his keen observational skills.

And that's all before he managed to sneak inside using only a bug zapper, ammonia spray, and a bobby pin, revealing that Strange has an entire wing of Arkham dedicated to his former Project Chimera experiments, people like Victor Fries or Karen Jennings. I don't think that the people running Arkham are going to be very happy to hear that Strange has been using them for his megalomaniacal plans to take over the world. And right now, Ed Nygma is the one who has real proof of the connection between Strange and Azrael/Galavan. Seriously, if he's ever able to get access to some real therapy, maybe Ed could wind up recovering from his temporary lapse into villainy and become a detective.

I mean, I know the Riddler's whole deal is that he uses his obsession with puzzles in order to construct elaborate traps for Batman, but since Gotham has already taken a few liberties with the DC Comics universe, I think watching Ed Nygma solve mysteries with his detail-oriented Riddler powers might actually be even more fun than his descent into evil.