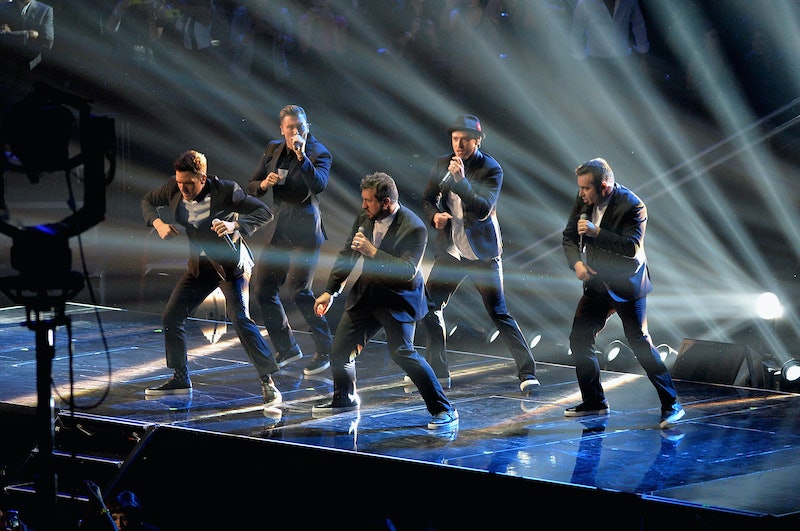 While *NSYNC isn't exactly a band known for transcending genres in major ways (their songs typically range from heartbreak ballads to youthful excitement over it being Friday night), their discography, in fact, is much deeper than your average tween pop sensation. For instance, did you know that if you re-listen to their lyrics, *NSYNC songs are actually way, way dirtier than you originally thought when you first heard them in the late '90s? That's just one of the many things you realize when you re-listen to *NSYNC as an adult.

Some of the things you realize aren't ones you'd have known as a pre-teen, such as how many of the guitar riffs on No Strings Attached mirror the later works of a certain Justin Timberlake's The 20/20 Experience. But many of the things you understand now are ones you just simply missed as a kid, and whether or not the band intended for their lyrics and musical arrangements to have the same kind of depth that they do today, you can actually learn a lot by re-listening to *NSYNC's greatest hits from 1997's NSYNC, 2000's No Strings Attached, and 2001's Celebrity. Here are 11 epiphanies I had from doing just that.

1. The Song "Digital Get Down" Is Totally About Cybersex

Check these lyrics, if you will:

We're getting nasty nasty, we're getting freaky deakyDigital digital get down just you and me(You may be) Twenty thousand miles away but I can see yaAnd baby baby you can see me[...]Bouncin me from satellite to satelliteI love the things you do for me so late at nightSo turn me on yeahIt's like I'm right there next to you yeah

Yeah, not so subtle.

2. Actually, All Of Their Songs, Arguably, Could Be About Sex

3. "Just Got Paid" Was Totally Written For The Masses

Most of the band's discography, as Billboard notes, focuses equally on Timberlake and J.C. Chasez's vocals. Most songs were arranged, according to the site, "so that Timberlake could deliver the blue-eyed tenderness ("This I Promise You," "Tearin' Up My Heart") while Chasez could attack the higher notes and longer melismas ("It's Gonna Be Me," "I Drive Myself Crazy")."

5. It Totally Makes Sense That The Marionette Puppet Became Such A Prominent Motif

Timberlake's later body of work allowed him virtually complete creative control, so you can theorize that the bandmates-as-puppets motif was meant to be a nod to *NSYNC's management controlling them like the cute little marionettes they pretended to be.

6. Most *NSYNC Songs Are Written By Non-Members In The First Person About Hypothetical Girls Who The Band Has Never Met

Seriously. How did that work when Lance Bass was asked about the girl he was singing to in, say, "I Want You Back"? How come no one ever questioned why all five bandmates were singing to one girl in every song?

7. Every Song Could Be Seamlessly Placed Into The Climax Of A Disney Channel Original Movie

8. The Ballads And Dance Anthems Have Basically The Same Beat And Instrumentation

Did they not have more options here? Something seems fishy.

9. Every Song Is About Heartbreak, Even If It's Fleeting

Did none of the bandmates ever actually get the girl IRL? What's going on with these lyrics?

10. *NSYNC Was All About The Throwbacks

#TBTs all day. From the Charlie Chaplin homage in "Gone" to all the mess that is "Pop," here's a band that knew how to reference the past long before the Instagram hashtag came along.

11. All The Guitar Riffs Mirror Each Other

Now, excuse me while I go and listen to all three *NSYNC albums again. And again. And then one more time for good measure.

More like this
The 'Kenan & Kel' Reunion On 'SNL' Took A Dramatic Turn, Thanks To Keke Palmer
By Brad Witter
The First Trailer For 'That '90s Show' Includes So Many Nods To The Original Series
By Jack Irvin, Alyssa Lapid and Grace Wehniainen
You’ve Been Singing The Wrong Lyrics To “All I Want For Christmas Is You”
By Sam Ramsden
These ‘Love Actually’ Plotlines Are “Out Of Date,” According To Director Richard Curtis
By Grace Wehniainen
Get Even More From Bustle — Sign Up For The Newsletter