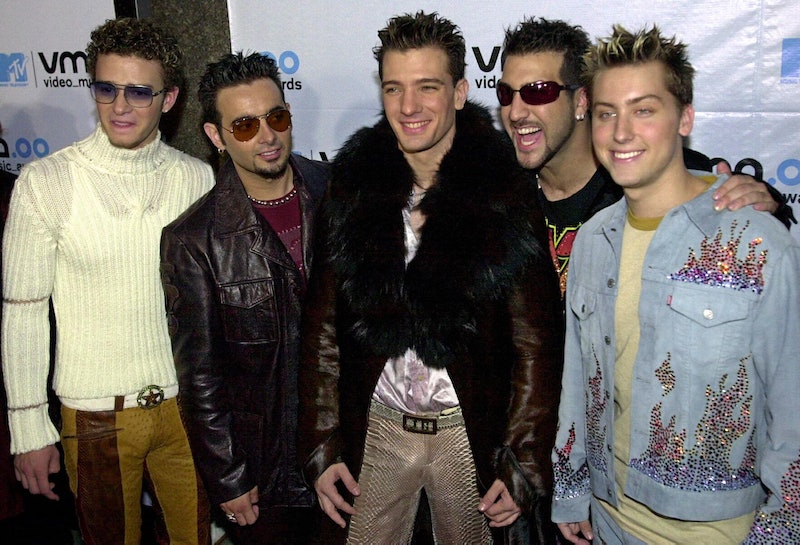 Hi there. Kristie’s ghost here. I hate to be the bearer of bad news, but ranking every *NSYNC music video ever did ol’ Rohwedder in. On the bright side, she left this mortal coil doing what she loved: stressing out over which *NSYNC video is the best of the best. But don’t you worry! All of her work wasn’t in vain; she managed to complete the list before, as we say in the afterlife, the spirit hit the fan.

…Just kidding! I’m not a ghost. I am Kristie the mortal. Everything is fine. (If you were fooled, don’t be embarrassed. My ghost impression is really convincing.) But do you know what I was not pulling your leg about? How tough it was to rank all of these terrific, special-in-their-own-way videos. But hey. I did it.

You might not agree with my decisions. That's fine. If you feel inclined to yell at your computer screen because you can’t believe I ranked “Merry Christmas, Happy Holidays" as highly as I did, I respect that impulse. That impulse means you care about this serious business as much as I do. We may disagree, but doesn't mean we aren't on the same team. And that team is, but of course, Team *NSYNC. Carry on with your yippie-yi-yaying self, you space cowboy/girl.

Don’t let the low rank fool you; I enjoy this music video. I really do. But if I'm being honest, it's kind of a bummer that *NSYNC never actually shows up in the vid. Sure, there's plenty of behind-the-scenes footage, but that isn't the same as, oh I don't know, the group crashing through the walls of that green bedroom like five Kool-Aid Men and surprising their fans with a concert.

Yeah, the baby pictures are beyond adorable, but what's with the Christmas tree? Last time I checked, "Together Again" was not a Christmas song. That might seem like a petty reason to knock a video down a few pegs, but it is what it is.

I’m just living my truth, and my truth says that while video is pleasant to look at, it is not the most thrilling. (I guess I live for the thrill? Learning a lot about myself today.)

This one reminds me of that Chili’s ad from the early '00s. You know, the one where the boy band winds up marooned on an island and a crate crushes Joey Fatone. Truth talk: This music video is fine and dandy (Chris Kirkpatrick's sunhat is a real scene-stealer!), but I’d rather watch the slapstick comedy masterpiece that is the Chili’s commercial.

This is a great video. It’s visually striking, I dig the Charlie Chaplin-esque intro, the guys look handsome, et cetera. However, both the song and the video are The Justin Timberlake Show— i.e., the beginning of the end of *NSYNC— and every time I watch and/or listen to “Gone”, I feel sad because OH MY GOD REMEMBER WHEN *NSYNC BROKE UP?!

Woo, buddy. This is flat-out ridiculous in the best way. Those satin pajamas? GORGEOUS. Also, I will never get over JC Chasez scream-singing at the camera.

Walls made out of bubbles and a sentimental story? Now THAT'S how you do a music video for a ballad.

There's a magical forest and exquisite turtleneck sweaters and singing bubbles. In other words, this video has my number.

The boy band dresses up like the Spice Girls and forms a can-can line at a pool party. Need I say more?

While this version isn’t as legendary as the version released in Germany, it’s still pretty great. The dance moves that happen in front of that foil backdrop? Ugh, be still my heart.

Basketball is a recurring theme in *NSYNC's videography, but "Here We Go" does it the best. It's the pep rally of my dreams!

The choreo in this video? Are you kidding me? Just phenomenal. They changed the game with that "I feel the pain" head grab move.

Oh, boy. I can hear the townsfolk now: “HOW DARE YOU RANK ‘BYE BYE BYE’ NUMBER 4! COME OUTSIDE SO WE CAN JAB AT YOU WITH OUR PITCHFORKS, YOU CLUELESS MONSTER. DO ANY OF THE BAJILLION AWARDS IT WON MEAN ANYTHING TO YOU? YOU WOULDN’T KNOW AN ICONIC MUSIC VIDEO IF IT DESCENDED FROM THE CEILING BY MARIONETTE STRINGS.”

I understand where you're coming from, hypothetical townsfolk. I do. That said, I stand by my decision. As fantastic as the puppet dancing is (actually, all of the dancing is spectacular), it can't beat the "Pop" dance break or the freaky *NSYNC action figures in "It's Gonna Be Me".

This music video is like chugging two liters of Mountain Dew, spinning around in circles, and face planting into a pile of Pop Rocks. (Yes, that's a compliment.)

I mean. I MEAN. Did you SEE those action figure costumes? Or any of those toy aisle dance scenes? My goodness. The only thing that could top this work of art is—spoiler alert!—outer space.

This music video is a perfect music video. There is a space station and velour zip up mock turtlenecks and exquisite choreography and so much pointing and so much hopping and— What’s that? This was their very first video? Way to start things off on a stellar (har har har har har har) note, *NSYNC.