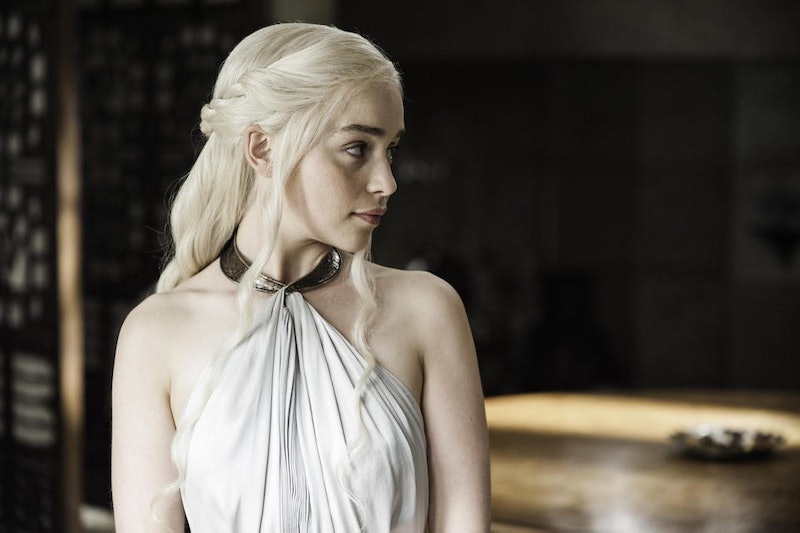 What I love most about being invested in a beloved popular show like Game of Thrones is the sense of community it brings. Friends, family, totally strangers, we're all in it together, experiencing as a group all the drama, the tragedy, the (brief) comedy, the triumph, and the abhorrence for Ramsay. But that sense of community is perhaps the most unifying when the show is off air and on hiatus. It's hard to obsess alone, especially when GoT takes hiatuses that last almost a whole damn year. But, now that we've all returned to Westeros mostly unscathed, we can also rejoice as a community., as shown by the below tweets summing up fans' feelings about Game of Thrones being back.

I constantly marvel at the wit of people on the Internet, especially on Twitter where they're limited to a mere 140 characters. And, I'm always that much more impressed when it's the people of the same fandom I consider myself a part of who are being particularly on point or clever. And, let me tell you, the GoT fandom just totally gets it. We are all the same — obsessed with the show, and just so happy to have our Sunday nights back.

Here are 14 tweets from fellow Game of Thrones fans that sum up all of our feelings about the show being back:

There Are Those* Who Can't Contain Their Excitement

*I mean, literally everyone.

And Those People Who Have Their Priorities Straight

There Are Others Who Have Basically Denounced Every Day But Sunday

While Some Are Just In Awe

Most amazing things are pretty unbelievable.

And This Person, Who's All Of Us Who Were A Little Late To The Party

Avoiding GoT spoilers like that is something to be proud of.

See, GoT fans? We totally get one another.