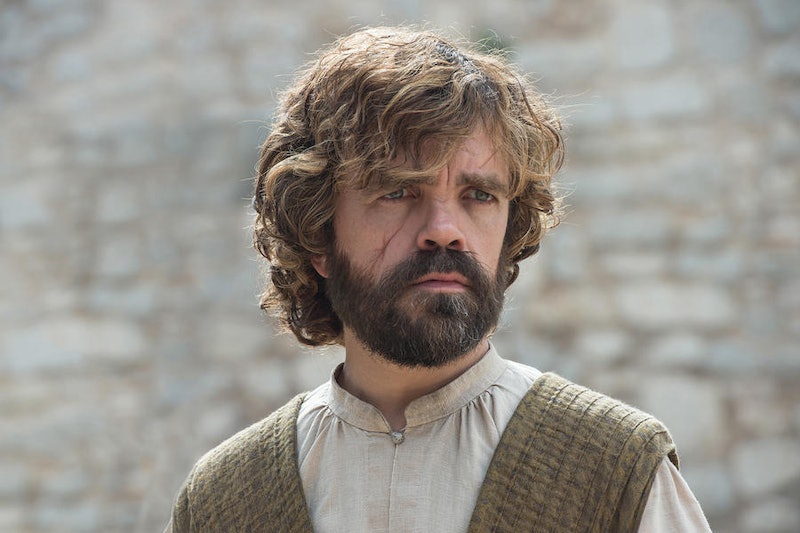 Do you hear that? That's the sound of everyone collectively breathing a sigh of relief that Tyrion successfully tamed Dany's dragons on Game of Thrones , which may very well add fuel to the already growing theory that Tyrion is a Targaryen. For those of you who are unfamiliar with the story, its rumored that King Aerys Targaryen (aka The Mad King) hooked up with Tywin Lannister’s wife Joanna at one point before his death. Many believe that Joanna became pregnant with Tyrion shortly afterwards, meaning he could very well be related to Dany as well as Jon Snow, if you're a R+L=J believer.

So the fact that Tyrion was able to talk down both dragons, Rhaegal and Viserion, from turning him into a pile of ash, could be the very proof that we've been looking for that this Lannister actually has Targaryen blood running through his veins. The way he spoke to the dragons was so calming, almost like a lullaby or as if he were telling them a bedtime story. He told the dragons that he asked for one of them as a pet on the day of his name day and cried himself to sleep when he was told that they no longer existed. And the craziest part was that the dragons were actually listening to him.

He even went so far as to release the dragons from their chains and still they did not strike at him. They let him walk out of there unharmed. Granted, he was definitely terrified the entire time and had some serious doubts while it was happening, but it still a very successful interaction. Was this just sheer luck and proof of just how charismatic he is to people and dangerous creatures alike? Or is it because his true lineage has always been able to wield such power? I suppose only time will tell...

More like this
George R.R. Martin Teased That ‘House Of The Dragon’ Is Inspired By The Anarchy
By Grace Wehniainen and Kadin Burnett
'The Sandman’s Ending Is A Departure From Neil Gaiman’s Comic Book Series
By Kadin Burnett
'Bridgerton’s Jonathan Bailey & Simone Ashley Just Teased A First Look Of “Kanthony” In Season 3
By Grace Wehniainen, Alyssa Lapid and Sam Ramsden
The New ‘LOTR’ Prequel Series Trailer Teases The “Many Lies Of Middle-Earth”
By Alyssa Lapid and Jack Irvin
Get Even More From Bustle — Sign Up For The Newsletter