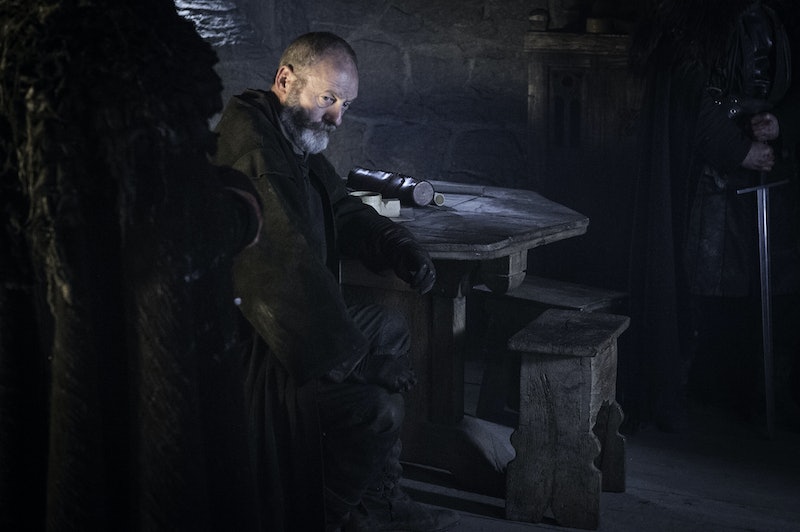 I'm still amped up and a little bit shocked still about Jon Snow springing to life (allegedly), but let's pause gasping and/or the victory laps for a moment and consider the circumstances. Why did Davos want Jon Snow alive on Game of Thrones ? Somehow, above all others, the Onion Knight became Jon's biggest champion and gee golly, are we all thankful for that!

Honestly, I think it all boils down to leadership. Lady Melisandre and Ser Davos Seaworth have never really gotten along, but they do have one thing in common — they're good judges of character, and they are good at pledging themselves to strong leaders. Stannis Baratheon may have been a bit of a bore, but he would have been much better on the Iron Throne than the last two, and maybe even the last three kings.

I wouldn't go so far as to say that Davos knows something about Jon or his mysterious parentage that we don't. He's from Flea Bottom, where I'm sure rumors run rampant, but that still doesn't seem likely. Davos is not a leader himself, but he needs someone to follow. Without Jon (and Melisandre, to be honest) he has no one. I think he sees that spark in Jon Snow that so many others have, and that's why he was willing to fight for his life, literally.

More like this
The Trailer For The 'Game Of Thrones' Prequel 'House Of The Dragon' Is Dark AF
By Grace Wehniainen
'Games of Thrones' Fans May Recognise This 'Conversations With Friends' Location
By El Hunt
Will ‘Moon Knight’ Return For Season 2? There Have Been Promising Signs
By Kadin Burnett
Marvel's 'She-Hulk' Trailer Is Finally Here & The Hulk Lends A Big Helping Hand
By Grace Wehniainen
Get Even More From Bustle — Sign Up For The Newsletter