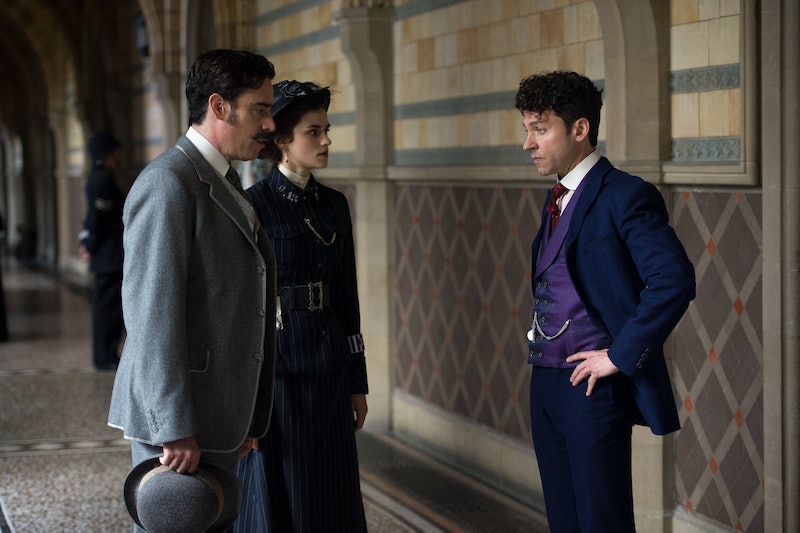 Two of the most iconic men involved in pop culture around the turn of the 20th century were Sir Arthur Conan Doyle and Harry Houdini. Although the author and magician seem like an unlikely duo, the Fox series Houdini & Doyle portrays the real friendship between the two men. However, that fact does not make the entirety of Houdini & Doyle a true story. While the story of the men battling over elements of the fantastical, with Doyle believing in the existence of the supernatural and Houdini dead-set on disproving the existence of spirits, is based on some real-life events, the new series mostly strays from the truth.

Whether you're more of a believer like Doyle or a doubter like Houdini, there's no denying that the writer of Sherlock Holmes and the famous escape artist solving crimes alongside the Scotland Yard makes for a good plot. Unfortunately, the truth to their involvement together in history wasn't as fabulous as all that and based much more in the reality that Houdini so valued. While the two men did know and admire each other (although on the show they are more like adversaries), they did not help solve crimes for the British police force together. Yet, there are some surprising elements of the true in the series and just the fact that Houdini and Doyle were even friends is pretty fascinating.

While the series has some accurate history to it, the premise of Houdini & Doyle is not based on real events. Here are some of the true elements that Houdini & Doyle covers, along with how the series works those facts into its fictional narrative.

Doyle & Houdini Did Know Each Other

The pair knew each other and became friends, but not until Doyle and Houdini met in 1920, according to The Guardian. The series takes place in London in 1901, so the show took some artistic license with the start of their acquaintance. Houdini & Doyle starts with the men at odds with one another and though they did have some issues in their relationship (specifically about their views on Spiritualism, according to Biography — more on that in a moment), the two well-known men regarded each other as friends.

They Did Have Opposing Views On The Supernatural

The show's main premise of Doyle seeking out mediums and believing in the supernatural while Houdini is a skeptic is basically true. According to PBS, Doyle was a "Spiritualist" for the later decades of his life and he believed in the paranormal, while Houdini was focused on disproving any mystical claims that he believed to be irrational. In 1922, two years after the men met each other, Doyle's wife conducted a séance to contact Houdini's mother, which Christopher Sandford documented in the book Houdini and Conan Doyle. Though Doyle and his wife thought they successfully connected with Houdini's mother's spirit, Houdini believed they were mistaken, which caused a rift between the friends. Yet, their mutual fascination with Spiritualism is also what helped bring Doyle and Houdini together.

Doyle Had Killed Off Sherlock Holmes

When Doyle is first introduced in the series, his famous literary character Sherlock Holmes is not only already well-known, he's also dead — much to the chagrin of the public and his publisher. This is true to real life since Doyle had killed off Holmes in the short story "The Adventure of the Final Problem," which was published in 1893. He pursued other literary ventures and published the non-fiction book The Great Boer War in 1900 based on his own experiences serving as a doctor in the war, but — like the series showed — people were far more interested in more stories about Holmes. He ended up bringing back Holmes for a prequel in 1901, which might be seen on Houdini & Doyle since that's the year when the series takes place.

Houdini's Chinese Water Torture Cell magic trick has been well-documented and so it made sense that the series introduces Houdini performing his escape from a vault full of water in front of a packed audience. Yet, the famous magic trick wasn't performed by Houdini until 1912, so the series has him performing it 11 years too early. He really could hold his breath for minutes and liked making bets, as seen on Houdini & Doyle, since Slate published audio of Houdini betting his audience $1,000 when he introduced the water cell trick one time.

Doyle Did Solve Some Crimes

Doyle had created the fictional Sherlock Holmes, but he was skilled himself when it came to solving mysteries and crimes. According to Sherlock scholar B. J. Rahn, Doyle successfully applied his own cleverness to do some real detective work, including finding a woman's missing fiancé in 1909, as reported by the Mirror. A PBS program, How Sherlock Changed the World, documents not only how Sherlock Holmes changed police investigations, but how Doyle himself did some sleuthing, successfully exonerating an accused man in 1903.

Houdini Was Rumored To Work For Scotland Yard

The book The Secret Life of Houdini: The Making of America's First Superhero makes the claim that Houdini was actually a spy for Scotland Yard. There is no real evidence that this is true, but Houdini did reportedly interact with the British spy William Melville, who is credited with helping launch Houdini's career in Europe since he was the officer who helped arrange Houdini's escape from Scotland Yard handcuffs.

While the real history and friendship between Doyle and Houdini is entertaining on its own, Houdini & Doyle manipulates the truth. And though you shouldn't expect a history lesson when it premieres on May 2, the series should be fun all the same.