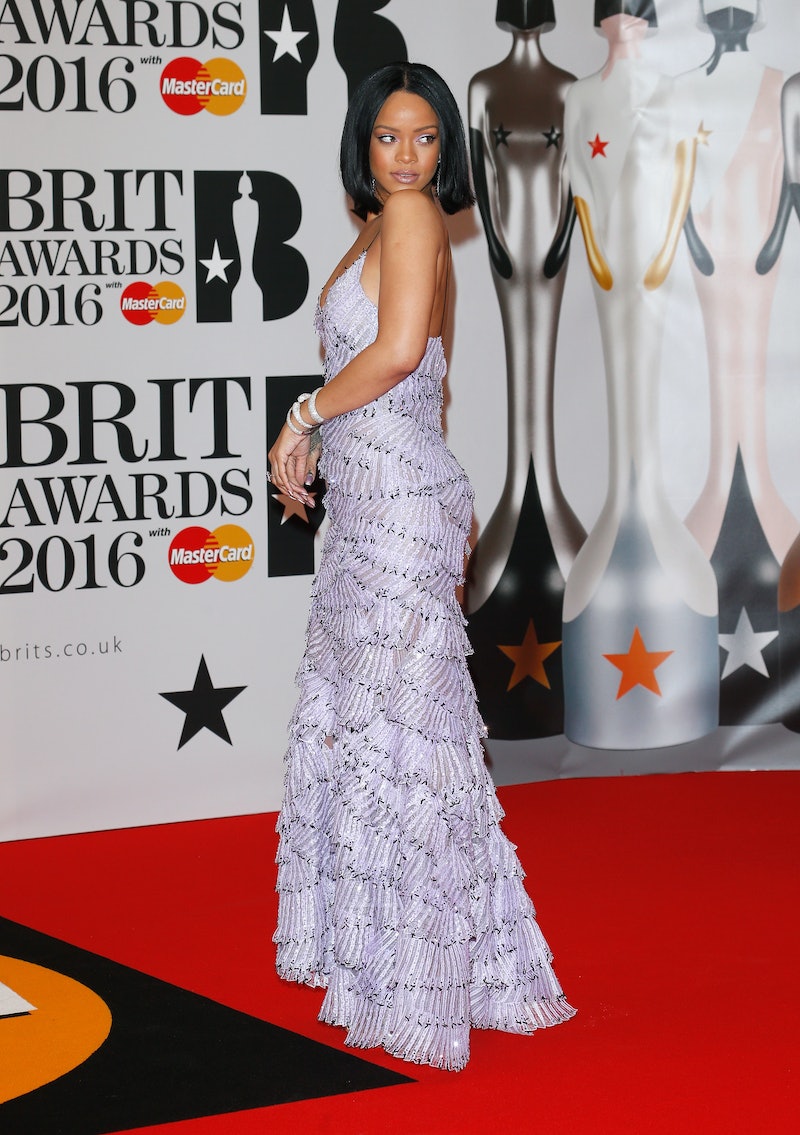 Rihanna is cornering the entire shoe market. Really. Her Rihanna x Puma fur slides are the epitome of turnt athleisure and the $80 shower shoes sold out upon launch. The Rihanna x Manolo Blahnik shoe collection, dubbed "Denim Desserts," boast several styles and lives on the other end of the pricing spectrum, ranging from approximately $800 to $4000, despite maintaining a similar urban glam look! The "Work" singer's shoe line with the designer, who was made ultra famous by Sex and the City, is comprised of denim footwear, including the centerpiece 9 to 5, which is an over-the-knee boot that can only be described as dangerously sexy!

The Denim Desserts capsule collection is available at the brand's stores in London, Hong Kong, and NYC on May 5. But did Rihanna actually design the shoes? Well, yes and no. The use of denim was entirely her idea, but it was the designer who executed the vision, with a little apprehension, as you will soon find out!

It sounds as though it is a true collabo.

"The process was very spontaneous," Blahnik said in an interview with Vogue. "I'm a professional for 45 years, she put it my hands, and I did the best that I can." How modest, since these sexy AF shoes make serious statements. Rihanna was apparently quite a muse. The heels are so hawt they are thermonuclear in addition to super exclusive and incredibly expensive.

Dayum, right? Those boots are like chaps but much, much more.

The sexiness and the price are to be expected with Blahnik shoes, due to the craftsmanship. That's also exactly why RiRi chose to work with Blahnik when she could have had her choice of working with any shoe designer she pleased.

"I chose to collaborate with Manolo because throughout the years he has proven to be the most timeless and diverse in his designs," Rihanna told Vogue. "His craftsmanship is like no other."

The designer also confessed that he was a bit concerned about her desire to create a denim collection, since the fabric is not his forte.

Blahnik told Vogue, "She said to me, 'I'd love to do a jeans collection.' I said, 'Well, it's a challenge for me,' because I don't possess a pair of jeans since 19... well, since I was very young. I've never worn jeans, I don't find them comfortable like people do. But anyway, here we are!"

Clearly, he got over his anti-denim stance and I can't argue with the end result. Denim and sequins? Now that is quite the mashup.

It's certainly a unique point of view and totally Rihanna.

These boots were probably not made for walking. Those booties, though!

More like this
14 Spicy Bralette Outfits For Vaxed Girl Summer, Round 2
By Avery Matera
Fashion Trends From 2002 Making A Comeback
By Avery Matera
Charli XCX’s Depop Collaboration Is A Spice Girl Fan's Dream
By El Hunt
‘90s Streetwear Brands That Are Making A Major Comeback
By Dominique Norman
Get Even More From Bustle — Sign Up For The Newsletter