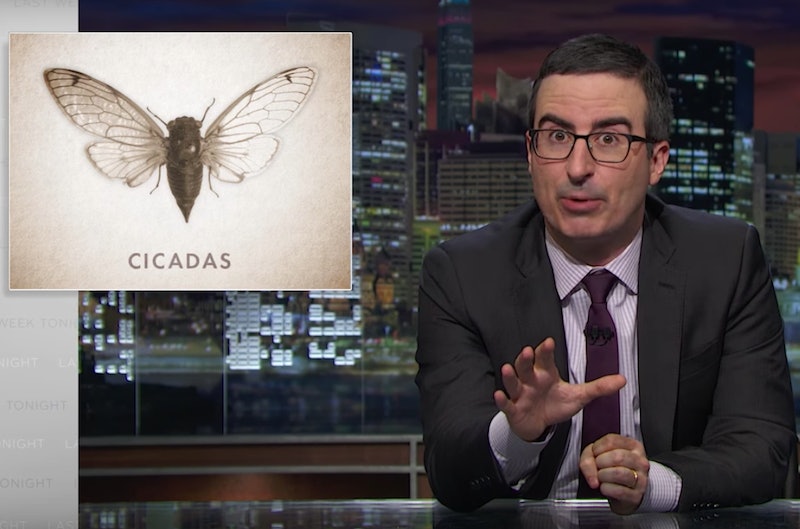 It's almost time for the noisiest insects of the summer to emerge in the northeast U.S., and this year's cicadas haven't experienced the new millennium yet. Because of the species' 17-year-long hatch cycle, the 2016 invasion (called Brood V) will be composed of cicadas that were conceived in 1999 and have been hiding underground ever since. Obviously, a lot has changed in the last 17 years, and John Oliver updated cicadas on what's happened since 1999 in a Last Week Tonight web exclusive. Like everything the British late-night host does, it was hilarious, sarcastic, and a bit nostalgic.

Cicadas have a very short life-span, living only two to six weeks before dying, so Oliver wanted to save them the trouble of catching up on the entire millennium. "Welcome to the new millennium, cicadas. A lot fewer people are calling it the Willennium than we thought they would in 1999," he quipped, referring to Will Smith's often-forgotten album Willennium released in 1999.

Oliver gave a brief synopsis of everything from pop culture to technology, beginning with the issue on everyone's mind in 2016. "First, let me catch you up on politics," he told the loud insects. "We voted in a second President Bush by a narrow margin, and rejected a third President Bush by an enormous margin."

He went on to explain the massive strides society has made in technology since 1999. "For example, the internet no longer screams in agony as you dial into it from your phone line," he joked, also explaining that YouTube is a video distribution platform "where teenagers become famous for playing video games and opening boxes."

Along with all the advances America's made, Oliver told the cicadas that a lot of things have faded from the public's attention over the years. "Some things that were very popular in 1999 have become a lot scarcer," he said. "Such as carbohydrates and Cosby Show re-runs."

Oliver wished the cicadas the best, telling them to live up the few weeks they'll be alive this summer, because who knows what will happen in the next decade. "Enjoy the world while you have the chance, because to be honest, depending on how things go in November, this planet might not be around in another 17 years," he said.

Pointing to a picture of Donald Trump, he said: "And I do not have time to explain that to you."