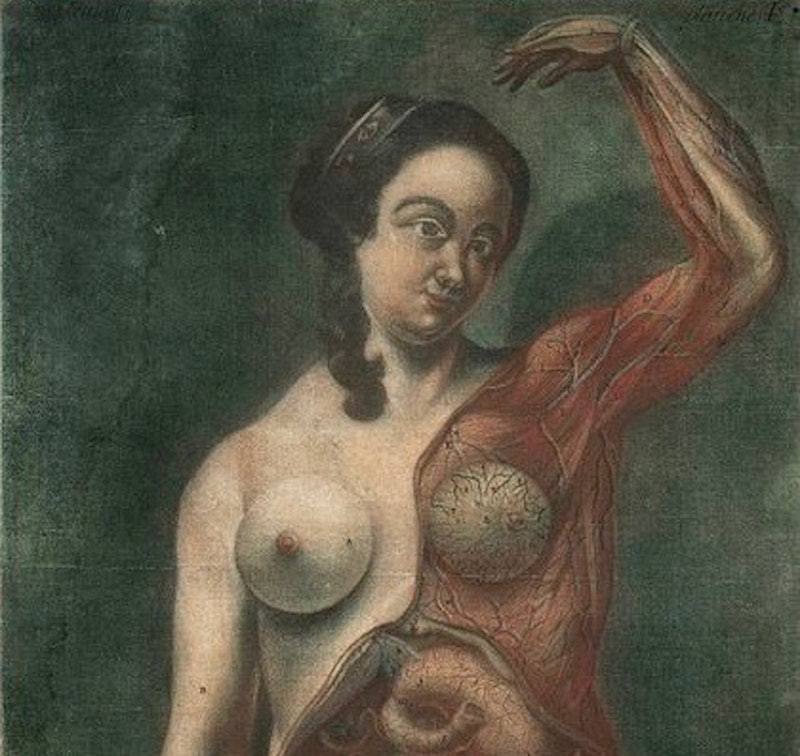 These days, gender identity issues tend to be focused (rightly) on things like non-binary identity, trans rights, and access to bathrooms (come on, North Carolina, what the hell are you doing?). But for centuries, humans have done their best to understand the origins of gender, and they've occasionally ended up in some frankly bizarre places. Female sponginess and seven-parted uteruses, anybody? It's crucial to understand this sort of gender history if you're going to get a picture of the long route to modern understandings of what constitutes the binary male and female body. And also, frankly, to be thankful that nobody's telling you you're the inferior sex because of your lack of teeth.

Gender difference is also always political, and in general, females have ended up the loser. The notion of female inferiority wasn't just a general thought in ancient cultures; some actually had it written into law. According to some legal theorists, the Romans actually had women legally inscribed as infirmitas sexus, the unstable sex, weaker in mind and body and therefore needing guidance rather than being allowed to do things on their own. That sort of thinking influenced a lot of the theories about how women and men came to be; you'll see that being born a girl was often seen as some kind of peculiar accident or deformation. "Male as ideal" has been the way of things for thousands of years, and history helps us understand why.

So let's take a crash course in how the ancients thought men and women were created and grown, from the emmer-versus-barley pregnancy test to folded genitalia.

1. That You Could Tell The Gender Of A Child Through Peeing On Grain

The gender perspectives of the ancient Egyptians are actually the subject of a bit of argument; scholars aren't quite sure if they believed in a "third gender" or not. But when it came to the two more conventional binary genders, male and female, the Egyptians appeared to know that the matter was decided relatively early in the womb, and they concocted a variety of tricks to see whether a pregnancy was male or female. The most bizarre? Peeing on a bunch of grain.

This is one of the most famous pregnancy tests in history, and pops up in the Kahun and Berlin papyri, both remnants of medical texts preserved from various ancient Egyptian time periods. Essentially, she had to pee daily on two bags, one filled with emmer grain, the other with barley. If the barley sprouted, she was pregnant with a boy; if the emmer did, she was having a girl; and if neither did, she wasn't pregnant at all. Modern researchers have found that hormones (progesterone and testosterone) may indeed have an influence on grain growth, but it's also chronically unreliable, doesn't seem to indicate pregnancy at all in many cases, and is also difficult to test nowadays; the ancient Egyptians used vastly different grain varieties we can no longer grow.

2. That Women Are Incomplete Or Deformed Men

This particular perspective on the difference between the genders may be thousands of years old, but I'm reasonably sure that if anybody questioned Donald Trump sufficiently he'd come up with it as well. It originated with Aristotle, the ancient philosopher, who decided that woman "is as it were a deformed male" in his Generation of Animals , backing up his thinking with the "proof" that women had fewer teeth than men, were more inclined to stay awake, and had a tendency to cry. The ultimate evidence for Aristotle, though, was that women couldn't produce semen, which brought forth life (never mind us actually carrying the baby). Ladies had stopped developing before they could develop this ability, and were therefore "passive" rather than "active" actors in the world. The nerve.

3. That Male & Female Bodies Differ Because Women Are "Spongier"

The idea that women were actually made of a different texture than men popped up in the writings of Hippocrates, the classical Greek physician and medical author, and remained hugely influential all the way into the Renaissance. Women for centuries were perfectly likely to have been told, in Hippocrates' own words,

"... a woman's flesh is more sponge-like and softer than a man's: since this is so, the woman's body draws moisture both with more speed and in greater quantity from the belly than does the body of a man. And when the body of a woman, whose flesh is soft, happens to be full of blood and if that blood does not go off from her body, pain occurs, whenever her flesh is full and becomes heated."

Hippocrates blamed this "sponginess" for menstrual pain and our tendency to bleed during periods, because clearly, we'd sopped up far too much blood with our sucking bodies. Men, being "harder," didn't have this issue, and also were better at stopping the bleeding just by being industrious: Hippocrates also noted that "the fact that a man works harder than a woman contributes greatly to this; for hard work draws off some of the fluid."

4. That All Genitalia Were Basically The Same

The "one-sex" model of gender was actually a very prominent part of medical theory for centuries; thinkers got the idea from Galen, who's up there with Hippocrates as the most prominent Greek medical writer in history, and came up with a very interesting argument that vaginas and penises were essentially interchangeable: if you folded them a bit, like anatomical origami, you could turn them into the other gender's genitalia. In his words, if you wanted to turn a man into a woman, you just had to somehow change the position of the penis and testicles:

"The scrotum would necessarily take the place of the uteri, with the testes lying outside, next to it on either side; the penis of the male would become the neck of the cavity that had been formed; and the skin at the end of the penis, now called the prepuce, would become the female pudendum itself."

The notion of "folded" genitals has actually had a second life in gender confirmation surgeries for transgender people; penis inversion, in particular, is a common procedure in male-to-female surgery, to attempt to create a "neovagina" using the components of the penis. But it's not as simple as Galen thought; you don't just automatically turn a penis inside out and form a vagina. It's a complicated surgical process involving a lot of construction, and more recently, surgeons have been pioneering techniques that don't involve inversion at all. (For female-to-male gender confirmation surgery there's no such thing as "turning the vagina inside out" to make a penis, either.)

5. That The Uterus Had 7 Parts For Sperm To Choose Between

Medieval doctors were very interested in how gender "happened," or how precisely the body "decided" whether it was having a boy or a girl. And a few of them in the 12th and 13th centuries came up with an interesting theory: clearly, the uterus had various parts to it, and whether it produced male or female babies depended on which bit the sperm ended up in.

The two big proponents of this idea, German medical doctor (and later saint) Albertus Magnus and physician Nicolas of Salerno, came up with the notion that the uterus has seven "cells" or chambers. Nicolas described them as "three on the right side, three on the left, the seventh in the middle." But it's Albertus's treatise De secretis mulierum ("Women's Secrets"), which was actually written to help monks understand human reproduction and sex, that carries the idea a bit further. Albertus believed that if sperm entered the left side of the uterus, girls would result, while if it went to the right it would produce males. If it ended up in the middle, lost, the child would be a hermaphrodite.

How this influenced things we're not sure, but it's entirely possible that people who'd read Albertus would try actively to "aim" their sperm in various ways to ensure the birth of the right gender. Hope that worked out for them.

More like this
An Honest Review Of The TikTok-Famous WalkingPad
By Kaitlyn Wylde
How To Protect Your Digital Privacy If You Need An Abortion Post Roe v. Wade
By Kaitlyn Wylde
Here’s How To Deal With Sexual Frustration If You Don’t Want Casual Sex
By Annakeara Stinson and Mackenzie Sylvester
Here’s How To Reignite The Spark In A Sexless Relationship
By Vanessa Marin
Get Even More From Bustle — Sign Up For The Newsletter