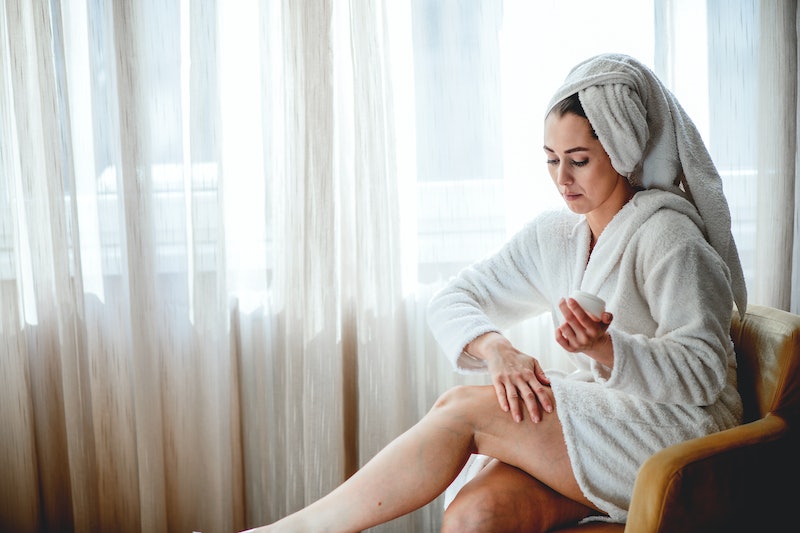 There are certain skin changes that can be naturally expected over your lifetime. A few more freckles, wrinkling, an unexpected rash when you scratch an insect bite too hard. But your epidermis does need to be monitored, in case it acts up more than it should. Awareness of your skin health should play the same role in your general health monitoring as thinking about your digestion. If things are going wrong, you should notice them early and track them properly, rather than just hope they'll go away. (And no, you can't just fix everything with coconut oil.)

Symptoms also may shift depending on where you live. If you're from a freezing country, you'll likely be familiar with the itching and swelling of extremities known as chilblains. If, like me, you're from somewhere heavily sun-exposed, you've probably been brought up to know how to diagnose a dangerous-looking mole, and frequently bother your doctor if one seems to have changed slightly. (Hugh Jackman's pleas for sun safety after having a skin cancer removed ring true to every Australian.) But beyond the dreaded C-word, there are some seemingly innocuous or mildly bothersome skin symptoms that you may be able to ignore, but which you likely shouldn't. If you're concerned, then as a general rule, get yourself an expert opinion.

Here are seven skin symptoms that should arouse concern, though not outright alarm you, if they start appearing on your beautiful skin.

If you come from a particularly hot and sunny country, play a lot of outdoor sports, or have clocked up a few hours tanning, it's vital that you know the signs of melanoma, the skin cancer particularly associated with sun exposure. And your cute little moles are where to look for this. As it happens, melanoma develops in melaoncytes, the cells that contain the chemical melanin and cause the darkness of moles. And because melanoma is the most lethal type of skin cancer, it's important that you know what a dodgy mole looks like when it surfaces.

Essentially, melanoma involves the aggressive and cancerous development of melanocyte cells, so any mole that appears seemingly out of nowhere is a matter of concern. (This is why you should know where all your moles are, and regularly check to see if any new ones have appeared.) However, old moles that have changed shape — such as by reddening, becoming uneven, or suddenly thickening or darkening — also need to be checked out. If something's concerning you, try to take close-up photographs of it to track how it's progressing and show them to your doctor. They'll take a look, and let you know if you need to get any moles biopsied or removed.

Melanoma isn't the only type of skin cancer. A less threatening but still serious variety is basal cell carcinoma, which involves the aggressive, cancerous growth of the basal cells at the very bottom of your skin layers. Instead of darkening, a basal cell carcinoma tends to show up as a pale lump, shiny pink growth, or in some cases a lesion or sore that just won't heal. In some cases, the Skin Cancer Foundation points out, it actually looks like scar tissue — white with some pinkness. If you haven't had any reason for scarring in that area, you should get it checked out.

Basal cell carcinoma is the most common type of skin cancer, and one of the least likely to metastasize, or spread throughout the body; most of them just stay at their original site. They can take a lot of shapes, though the most unpleasant is probably the long-lasting ones that turn into painful ulcers. But it's very unlikely they'll do anything to your health in the long term, beyond being annoying.

Blisters happen. If you're the sort of person who brushes a hot stove frequently enough, you will know this very well. (I am that sort of person.) But in certain sites on the skin, specifically the interior of the mouth, the lips, and the genitals, blisters and ulcers tend to be a mark of herpes simplex, the incredibly common viral skin condition present in a huge swathe of the population. (On the mouth, they're known as cold sores.)

You likely know about herpes, but you may not be aware of the distinction between its two types, HSV-1 and HSV-2. HSV-2 is the one commonly associated with genital herpes, though it's entirely possible to have symptoms of HSV-1 on your genitals if somebody with HSV-1 gives you oral sex (they don't have to be showing symptoms, either). The symptoms only really differ in their location, but they're both "fever blisters," as the body attempts to fight the infection. HSV-2 is less common; the World Health Organization estimates that 417 million people worldwide have it, while a whopping 3.7 billion people (two-thirds of the global population) have HSV-1. Yep. You're hardly on your own here. But it's still worth getting checked out, because while it's not possible to cure it, it's also easily treatable.

4. Redness That Won't Go Away

If you've always been prone to blushing and now seem to have a permanent flush, it may be sunburn, but it may also be a sign that you're developing rosacea, a chronic inflammation of the facial skin that commonly pops up after age 30. It may show up in various ways, though. Whether you encounter simple reddening of the cheeks, varieties of red and inflamed acne, or inflamed blood vessels that streak the skin, it's all considered part of the "normal" rosacea spectrum.

Rosacea only happens on the face, so if you're encountering redness elsewhere, it's likely something else. Any kind of redness that's persistent needs to be seen by a doctor, though, because it indicates serious irritation; it could indicate a fungal infection, ringworm, something in your clothes or environment causing irritation, a rash from hay fever, or Lyme disease, which is caused by tick bites. It may be completely benign, but go to a doctor and see what they think.

If you seem to keep encountering skin patches that crust, flake like scales, and won't heal, it may be a sign of psoriasis. It's the skin condition that for a brief moment became the most famous medical term in the world, after Kim Kardashian revealed that she and her mother Kris Jenner suffered from it in an episode of Keeping Up With The Kardashians. It's actually an autoimmune disorder in which the body over-produces skin cells and can't slough them away fast enough, causing a build-up and "flaking" on various bits of the skin.

Dry, flaking skin may have other origins as well, including the skin condition eczema or a simple build-up of dry skin (get exfoliating), but if it's persistent and won't yield to moisturizing or any other treatment that should leave skin naturally dewy, it needs to be checked.

6. Irritation In Response To A Substance

This seems particularly simple. If a substance is irritating your skin, stop using it. But in the case of contact dermatitis, it can be difficult to isolate exactly what is causing the difficulty. Stuff known to cause dermatitis includes certain metals, detergents, perfumes, too much soap, and various kinds of skincare ingredients. Knowing what's actually the source of the problem may require some collaboration with a medical expert, instead of just home detective work. You may just have irritated skin, or it may be a manifestation of an allergy. The latter is concerning if undiagnosed, because it means you're vulnerable to possibly dangerous allergic reactions in the future if you encounter the substance again.

This is actually a case in which a doctor is definitely needed, but you're not as likely to be dying as you think. People associate raised welts on the skin with an allergic reaction and likely panic, but it turns out that urticaria, or hives, can be caused by fairly benign conditions as well, and can often not be particularly dangerous. Hives can also turn up in response to insect bites or an allergic substance like nuts, but it's also been known to happen in people who are too hot or cold, on certain medications, or just feeling a bit under the weather. Some people even develop them if they take painkillers or go into the sun.

The American Academy of Dermatology only classifies welts as a real emergency if they last for a long time (more than a few days), or are accompanied by serious swelling of the eyes and lips. So hives are medically concerning, but not necessarily a major panic situation. Take a deep breath.

More like this
TikTokers With Eczema Are Opening Up About Topical Steroid Withdrawal
By Kui Mwai
13 Non-Toxic Sunscreens Under £35, So You Can Glow Responsibly
By Lauren Sharkey, Rebecca Fearn and Jessica Morgan
Kiehl’s Just Launched Eco-Friendly Cleansing Bars
By Jessica Morgan
7 Derm-Approved Tricks That'll Help Ease Sunburn Pain
By Paris Giles
Get Even More From Bustle — Sign Up For The Newsletter