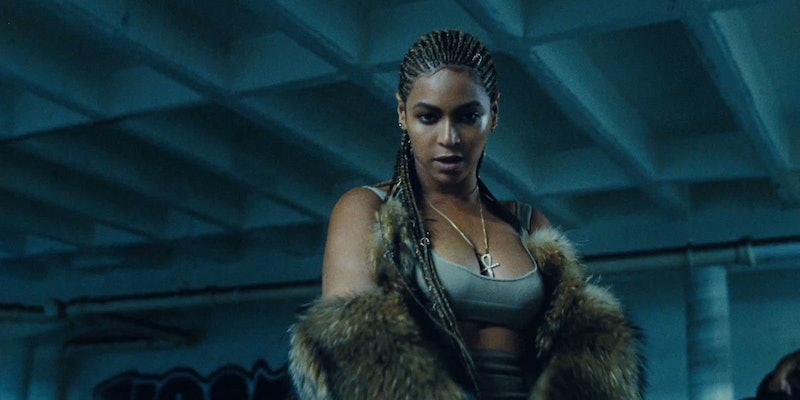 When Beyoncé premiered Lemonade on HBO on that fateful day, April 29, 2016 — a day that will live on in our hearts and minds for ever and ever, all thanks to the fact that fans had no idea what we were in for. The visual album is a solid hour of exhilarating music topped with beautiful imagery that goes above and beyond what we've come to expect from a surprise album... even a surprise album from the queen of visual albums. But for those who were hoping to re-watch the album (over and over and over again) without purchasing it on iTunes, HBO isn't going to be your best bet. I've scoured the schedule and no, there is not going to be a rerun of Lemonade on HBO, at least in the near future, a sorrowful fact for those who don't want to drop the $17.99 on iTunes or the subscription fee for Tidal.

But if you're feeling frugal, there is one way to get a taste of Lemonade on the cheap: Download Tidal and give the free 90-day-trial a whirl (if you didn't already use it on Kanye's The Life Of Pablo, of course). I've chosen this option, and may I just say, yes there is a lot of other wonderful content you can check out on Tidal — you've got your Nicki Minaj, your Rihanna, even Prince, but I haven't listened to anything else other than Lemonade since last Saturday (addictive personalities FTW), so I wouldn't know anything about that.

If you're not so into Tidal for whatever reason, you can also buy Lemonade on iTunes for $17.99, which, if you think about the fact you'll be getting an hour-long version of what may be one of the most beautiful visual albums of our time, is a steal. Or you can grab the album on Amazon for $17.09. I'd skip my morning coffee for a few days for this album. Just sayin'.

Whatever you do, there is no excuse to not give this solid film a good ole fashioned re-watch. I swear it's a zillion times better the fifteenth time. I swear.