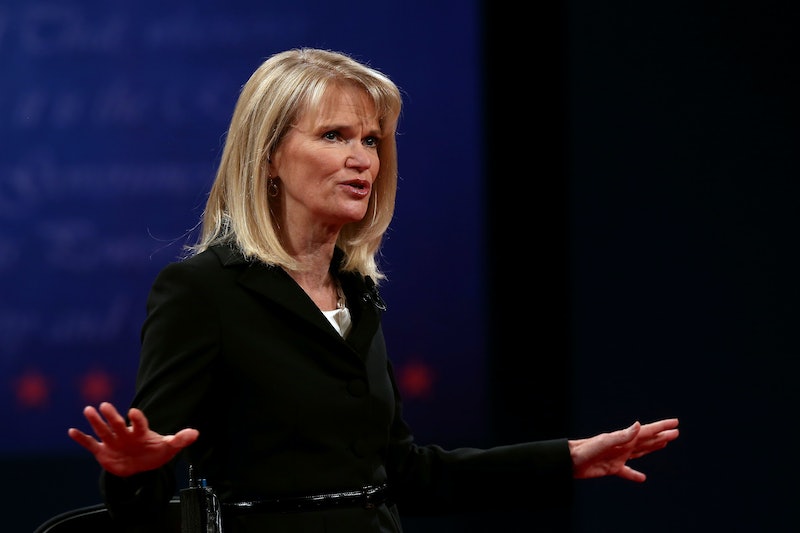 From flying with a trailblazing female fighter pilot to pressing 2016 presidential candidates on the important issues, Martha Raddatz has the news cycle covered. As ABC's Chief Global Affairs Correspondent and co-anchor of This Week, Raddatz has spent decades familiarizing herself firsthand with the realities of war beyond American borders. It's said that war can harden a person, but for Raddatz, reportage never relies solely upon the desensitized collection of facts. Instead, she tells Bustle that she does what she does to remind her viewers of the emotions which unite us all. She explains that the best reporters are "people with a soul who understand and who can empathize."

By appealing to her audience's softer side and telling the stories of men and women who have held their own in some of the world's most violent regions, Raddatz is changing the way we define "tough" and showing young women that they too can aspire to do the same things as men.

As early as 1996, when she was NPR's Pentagon correspondent, Raddatz began traveling to dangerously volatile countries, such as Bosnia. Though she was no stranger to reporting in areas of conflict, it wasn't until Sept. 11, 2001, that she felt compelled to pursue it as a professional career. "It changed me," Raddatz tells Bustle. "It changed all of us." The inherent risks involved became negligible in comparison to the necessity of her work.

In the atrocity that sparked the "War on Terror," over 2,700 people lost their lives. Even today, not all of the remains have been positively identified. The pain at home was insurmountable, but Americans had to look further to understand the bigger picture. The conflicts that ensued cost even more lives, and some have lasted to this day. As the situation drastically changed, Raddatz and other correspondents took it upon themselves to share the experiences of the people who were fighting thousands of miles from our backyards.

"I approach my reporting as storytelling, and I say that because people need to hear those stories," Raddatz explains. "It’s not just reporting the facts … Those are human beings on all sides of those conflicts, and I want to report what motivates them, how they survive, where they go next, what happens afterwards."

Kathryn Bigelow, director of The Hurt Locker and Zero Dark Thirty, has spoken to Raddatz about her experiences in Afghanistan while gathering as many firsthand accounts of the conflict as possible. Raddatz was of special interest to Bigelow because she had reported special details on Osama bin Laden's death in 2011, in addition to working frequently in the region. The Oscar-winning director described Raddatz' emotionally-charged style while praising her work in the Middle East:

In a 10-minute conversation, Martha will break your heart with the stories of children living in rural Afghanistan, she’ll inspire you with tales of front-line heroism, and she’ll make you laugh uncontrollably with observations about the stylishness of scarves and body armor.

For years, however, Raddatz was hesitant to draw too much attention to one aspect of her own story: She's a woman in a male-dominated field. Up until now, the fierce reporter has maintained that her gender shouldn't factor into a discussion about her success. In a 2012 interview with The Women's Media Foundation, for example, she said she did her best not to think about it while covering the Pentagon and the military, both of which involve considerably more men than women:

My approach was never to say: 'Let a girl in, I can do it.' I just did my job as well as everyone else, and made sure that people didn’t think gender had anything to do with my career success.

After all, why should it matter that she's a woman reporter? She's a successful reporter regardless of her gender. "I think I have spent my career trying to say, 'Oh, no ... I don’t like to be the first woman to do this, or first woman to do that,'" Raddatz reminisces. "But the truth is, what I love about that is I think it is great for other young women in particular to see women doing it."

One of those barrier-breaking role models was Col. Jeannie Flynn Leavitt, the Air Force's first female wing commander. During her interview with Raddatz, she downplayed the odds and humbly focused on her performance instead:

You know gender, race, religion, none of that matters. What matters is how you perform.

When it comes down to it, a reporter's success should be evaluated by his or her stylistic touches, focus points, or coverage methods — not by their gender. "I’m always going to cover news how I cover news, whether I’m a male or female," Raddatz says. "We all have unique personalities." Today, strength isn't defined by physical ability or a domineering personality, but through a willingness to hang on indefinitely to the strand of emotion that connects the billions of unique personalities in this world. In other words, it's all about the bigger picture.

More like this
The Church Of Scotland Votes To Allow Same-Sex Marriages
By Sam Ramsden
How To Support Gun Control Reform Right Now
By Morgan Brinlee and Carolyn Steber
36 Influential AAPI Voices On Pride, Power, & Progress
By Faith Xue
Photos Of Boris Johnson Drinking At A Downing Street Lockdown Party Have Surfaced
By Bustle UK
Get Even More From Bustle — Sign Up For The Newsletter