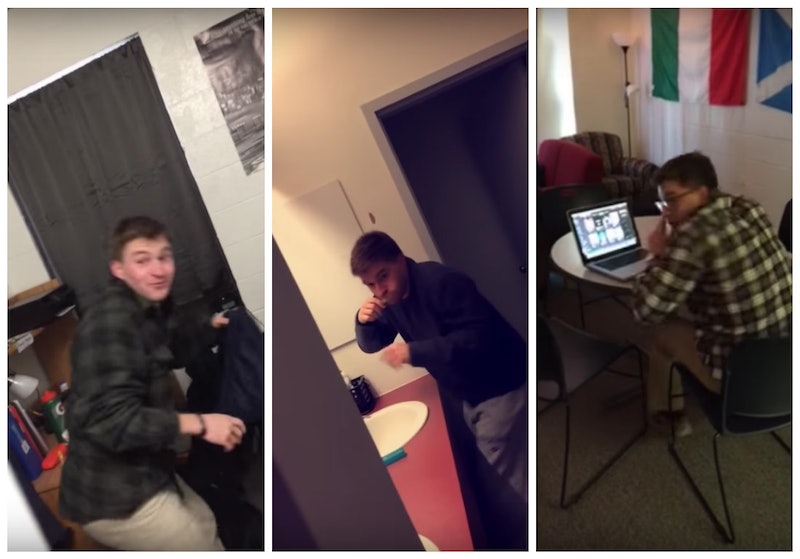 Watching really attractive people "do things" is the premise of a lot of commercial success in Hollywood and reality television, and as it turns out, the digital world wanted a taste as well. A perfect example would have to be the guy who scared his cute roommate over and over on camera and posted it online. The premise is simple — scare a very hot guy over and over again. The result? Countless satisfied viewers seeing a very attractive man get easily scared by simple noises. What could be better?

Reddit user wingsofagod posted a video on YouTube showing his roommate getting spooked at random times throughout the year. It's hilariously funny to watch him yelp in terror only to realize moment later that it was just a false alarm. While the cute subject laughed everything off with a dapper smile, I would have thrown something at the perpetrator without question. I scare so easily that I am almost always on high alert. This is because one time I thought I was being pranked when I heard groaning from beneath my car, only to discover a homeless man making camp. Since then, it's Scared City, population me.

The video creator stated that the video was a compilation of 25 clips, 24 of which were personally shot by him. The final one was his friend deciding to take part in the prank. I'm sure they didn't expect the video to go this viral, but at the same time they should have guessed that their attractive friend was worth the views.

Oh, wait. Did I forget to mention that the dashing man was named WEINER? Because that is his name, and although it does nothing to add to the narrative, it is somehow perfect. For obvious reasons, the scare with him shirtless made it into my top three fave moments of this video (hellooooo, friend).

If you're looking for more amazing prank videos, this one has always made me really happy:

CollegeHumor is always funny, but nothing beat the prank war between two of its cast members. It went on for so long, and some of the moments were truly cringeworthy. Luckily, this video was just plain fun.