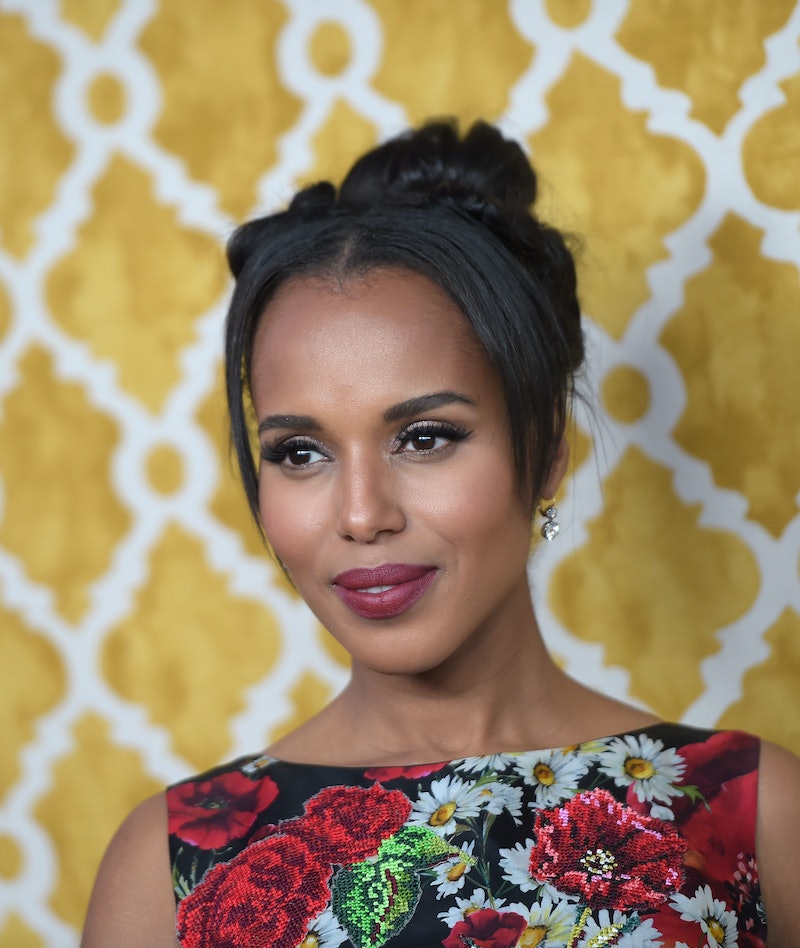 It looks like there is another Scandal baby on the way. According to E! News, Kerry Washington is pregnant with her second child. Apparently, sources have confirmed that she and her husband Nnamdi Asomugha will soon welcome another child. They are already parents to daughter Isabelle. While attending the 2016 White House Correspondents', E! News reports that the actor was sporting a very evident baby bump. Bustle has reached out to Washington's rep for comment, but did not receive an immediate response.

According to Us Weekly, the actor who brings to life the beloved Olivia Pope on ABC's hit drama also supposedly debuted her pregnancy with "the first signs of a baby bump" on the red carpet at the United Way of Greater Los Angeles Women's Summit on Monday, April 25. Again, nothing has been confirmed.

Now, let's address what I'm sure all Scandal fans are thinking. Will Olivia Pope be pregnant too, you know, if Washington is truly pregnant with her second child? I'm going with no. Seeing as the series already dealt with Olivia getting pregnant to Fitz, which led to her getting an abortion in the Season 5 winter finale, I highly doubt that Olivia becoming pregnant again would happen anytime soon. That said, you never know what creator Shonda Rhimes has up her sleeves.

Whatever the case, if Washington is really pregnant and Rhimes chooses not to incorporate it into the series, that just means fans can look forward to seeing how they hide her baby bump all over again. I mean, who doesn't want to see Fitz's knee being used as the perfect cover again?

More like this
Zawe Ashton & Tom Hiddleston Are Pregnant With Their First Child
By Bustle UK
Tanya Burr Is Expecting A Baby With Her Mystery Partner
By Maxine Harrison
What Is the Net Worth Of Each 'Stranger Things' Season 4 Cast Member?
By Hugh McIntyre
Who Is 'Stranger Things 4' Fan-Favorite Joseph Quinn Dating IRL?
By Grace Wehniainen
Get Even More From Bustle — Sign Up For The Newsletter