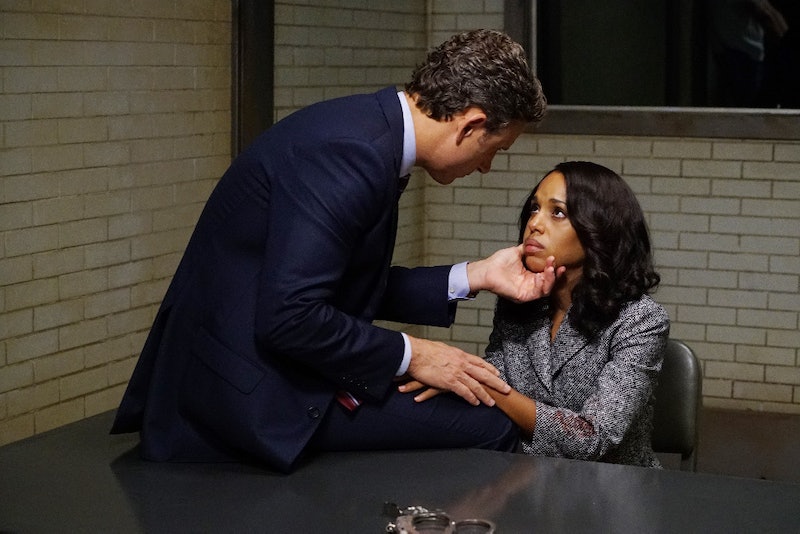 The Season 5 winter finale of Scandal delivered two shocking scenes. One of which fans probably saw coming, but the other? Not so much. Not only did Olivia and Fitz break up, but Olivia got an abortion. The latter event was a surprise to many, but it was unprecedented and something, thanks to Shonda Rhimes, that will forever go down in TV history. If anyone can turn a controversial women's rights issues into an eye-opening and brave moment, it's Rhimes. While some fans are still dealing with their #ScandalHangover, there are many who are reacting to the episode. What may come as a surprise to many, it seems Scandal fans are more upset about Olitz parting ways than they are about Olivia's abortion.

Let's discuss how wonderful and refreshing that is. You would think when it comes to an abortion on a popular television show, there would be an uproar, especially since it wasn't just mentioned in passing or alluded to in the episode. There was an actual scene of Olivia at the clinic getting the procedure. But after scrolling through Twitter, it seems like fans are reacting much more strongly to their beloved couple Olivia and Fitz ending things than the show featuring an abortion.

It seems like Olivia's choice is something fans are recognizing as "normal" and that it was most definitely her choice to make. Some are even praising the moment:

See how calm and rational the tweets are? Now compare them to fans' reactions to Olitz splitting:

A bit more expressive than the previous tweets regarding the abortion, right? That's bound to happen when it comes to a TV couple that fans have shipped so hard for five seasons. To have them finally choose one another and try to live as a couple in the public eye, but then have them break up in the middle of a season? Yeah, it's a bit devastating.

Of course, there are some fans who are upset and don't agree with Olivia's decision, which isn't a surprise. However, there seem be more people finding issue with the fact that "Silent Night" was played during the abortion scene rather than the actual abortion itself:

Whether you agree with Olivia's choice or not, there's no arguing with the fact that with just one scene Rhimes was able to normalize abortion and say a lot about a woman's right to choose. Obviously, fans see it that way, too.